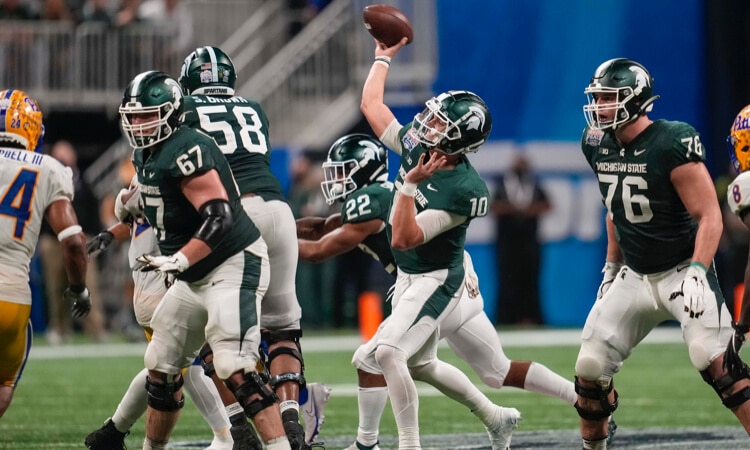 Two of Michigan’s five Division I football programs open their seasons against each other on Friday night, when the Western Michigan Broncos visit the Spartans of Michigan State. It’s about 80 miles from Kalamazoo to East Lansing, but there’s a lot more distance separating these two programs, according to Michigan’s mobile sportsbooks.

Some books, including BetRivers and Barstool Sportsbook, favor MSU by 21.5 points. Several, including BetMGM, FanDuel, FOX Bet, and PointsBet, have set the spread at 22.5. And one major book, DraftKings, has the Spartans giving 23.

Want to bet on Michigan State to win outright? You’ll pay as much as $25 to win $1 with some operators, and the best price available is -1600 at FOX Bet. On the other side of the coin, you can earn up to 11/1 on your money at FanDuel taking the Broncos to score the upset. (At all books, the point total for the game is 54.5, with slight variations in the juice.)

On paper, this isn’t a competitive game. But, of course, there’s pride on the line whenever two schools from the same state square off. And depending on how close the contest proves to be, bettors will learn a little something about State’s chances in the fearsome Big Ten and Western’s hopes in the less-stacked MAC.

Spartan Nation, we can't wait to see you all at the Spartan Walk at 4:50 PM on Friday!

The two teams actually aren’t so far apart in terms of win totals set by the bookmakers.

Despite winning 11 games, including the Peach Bowl, last season, the Spartans haven’t earned the full respect of the sportsbooks entering the 2022 campaign, with their over/under win total set at a mere 7.5 following the departure of Heisman candidate Kenneth Walker III. However, that line is juiced to the over, with a majority of bettors believing Michigan State can get to eight Ws.

Western Michigan’s line is just one win lower, at 6.5. But that one is juiced to the under, indicating most gamblers believe the Broncos will win no more than six of their 12 scheduled games.

So even though the respective lines are just one win apart, conventional wisdom says there’s at least a two-game gap between these two teams, even with MSU facing a far more challenging schedule. And the expectation is that they’ll be halfway to establishing this gap after Friday’s game before a crowd of up to 75,000 at Spartan Stadium.

The Broncos’ offense figures to look different this year than in the team’s 8-5 2021 season, with top receiver Skyy Moore now on the Kansas City Chiefs and QB Kaleb Eleby graduated. For now, sophomore Jack Salopek is slated to start under center. Michigan State has a big theoretical edge at the quarterback position, with redshirt junior Payton Thorne returning after throwing 27 TDs last year.

But, again nodding to a massive difference in quality of opposition, Western Michigan is a much more live ’dog to win the MAC than State is to capture the Big Ten title. The Spartans are listed seventh at DraftKings to win their conference, with longshot odds of +2800. The Broncos are just a hair better at sixth-shortest to win the MAC, but the price of +900 suggests it’s not an entirely unrealistic proposition.