Michigan Is A Massive Odds Favorite Against Colorado State 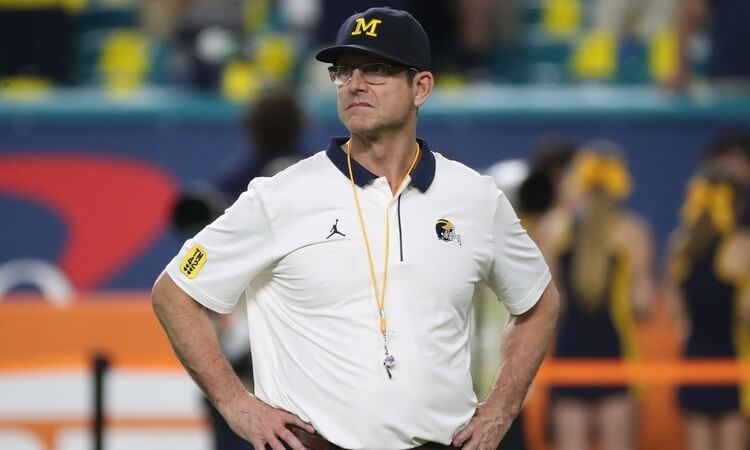 Jim Harbaugh and Michigan open their 2022 season Saturday against Colorado State. The Wolverines, who made the College Football Playoff a season ago, are 30.5-point favorites Saturday on several sports betting platforms, including BetMGM, Caesars, DraftKings, FanDuel, and PointsBet.

Betting odds suggest we shouldn’t expect the Wolverines to be challenged until late September at the earliest, as the team’s nonconference schedule stinks. After facing Colorado State, Michigan plays Hawaii and UConn in consecutive weeks. Hawaii lost to Idaho by 53 points in Week 0, and UConn hasn’t won more than three games in a season since 2015.

An ugly nonconference slate allows Harbaugh the luxury of extending his quarterback competition into the season.

If you have two quarterbacks …

“We have made a decision,” Harbaugh said in a release on Aug. 27.

Just sentences later, Harbaugh would share that Michigan hadn’t really made a decision on its starting quarterback.

“Coming out of camp, I just feel like we have two quarterbacks, Cade McNamara and J.J. McCarthy, that we feel very confident that we can win a championship with either of those two behind center,” Harbaugh said.

Harbaugh plans to start McNamara against Colorado State, while McCarthy will start against Hawaii. After those two games, Harbaugh expects to name the team’s starting quarterback.

Jim Harbaugh on Inside Michigan Football: "If it is right where it is today and has been the last three, four weeks … it's neck and neck … that's a good thing for our team. Would you rather not have two good quarterbacks?"

It’s an unusual situation, but Harbaugh can afford to try out different things with such an easy nonconference schedule.

The weird dynamic essentially tanks the Heisman chances of each player, as Barstool Sportsbook lists each quarterback at +10000 to win the award. For perspective, Boston College quarterback Phil Jurkovec has shorter odds at +8000. Jurkovec, a talented player, is an unlikely contender given Boston College’s minimal team expectations this fall.

Michigan is expected to contend for the Big Ten title and possibly more — the Wolverines are +5000 to win the national championship on FanDuel — yet the quarterbacks are well outside the Heisman picture.

Elsewhere in the state

Michigan State opens its season Friday against Western Michigan, and the Spartans are about a three-touchdown favorite at most sportsbooks. The Spartans won 11 games in 2021, as head coach Mel Tucker revitalized the program.

Central Michigan is +600 to win the MAC, as the Chippewas could be one of the better teams in the conference. They open the season Thursday night at Oklahoma State, for which they’re about a three-touchdown underdog at most sportsbooks.