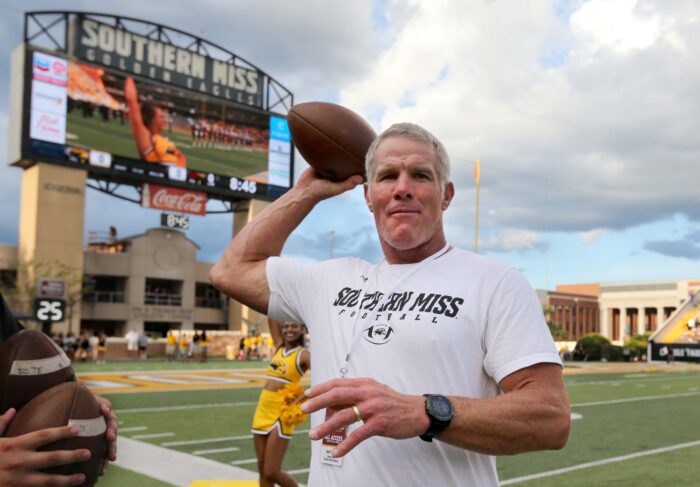 TwinSpires is calling on a heavy hitter to promote their sportsbook rebranding and online gaming options, using Pro Football Hall of Fame quarterback Brett Favre in its new ad campaign.

The deal announced Thursday will have the Super Bowl-winning quarterback in a commercial participating in a series of betting-related boot camp drills as part of its “Bet Dedicated” ad campaign that will debut in Michigan, perhaps as early as next week pending regulatory approval by the Michigan Gaming Control Board.

Favre — inducted into the Hall of Fame in 2016 — will also be part of traditional and digital advertising spots for TwinSpires, whose parent company Churchill Downs Incorporated last week announced a rebranding of all its BetAmerica sportsbooks to TwinSpires, which will take place during the first half of this year.

“As a campaign concept, Bet Dedicated is not only a reflection of our heritage, but also the brand promise we are making to our players,” said TwinSpires Vice President of Marketing Sean Phinney in a release. “Brett epitomizes what it means to be dedicated, and we’re thrilled to have him star in this campaign as we launch the TwinSpires online sportsbook and iGaming platform into Michigan and other states.”

Churchill Downs is entering the Michigan sports betting market through a partnership with the Hannahville Indian Community. The two sides reached agreement on a deal last July that included a retail sportsbook at Island Resort and Casino in Harris as well as an online presence for both sports betting and iGaming.

Approval for online sports betting and casino gaming is expected to be granted by the MGCB before the end of the month, with multiple operators eagerly awaiting the start of what will be a massive expansion of gaming in the Wolverine State.

Churchill Downs also has online and retail sportsbooks in New Jersey, Indiana, Mississippi, Colorado, and Pennsylvania. TwinSpires, which is the official wagering partner of the Kentucky Derby, has been used by CDI’s online pari-mutuel wagering business since 2007.

“I knew this was a campaign I could get behind the moment it was introduced to me,” said Favre, who compiled a 28-9 lifetime record — including two playoff wins — against the Detroit Lions while doing most of that damage as quarterback of the Green Bay Packers. “I was never the biggest or the strongest or the fastest, but throughout my career I outworked the guys that had the same dream, because I was the most dedicated.”