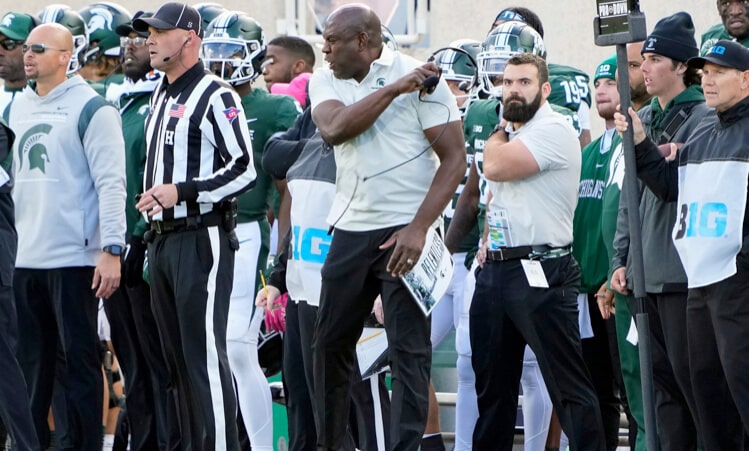 Want to know how good Seattle Seahawks running back Kenneth Walker III is? Don’t look at his 6-yard-per-carry average, his freakish speed, or the fact that, at odds of +175 (WynnBET), he’s the current favorite to be named the NFL’s Offensive Rookie of the Year.

Instead, look at how bad his alma mater, Michigan State University, is without him.

Then undefeated and ranked 11th in the country, the Spartans traveled to Seattle for a Sept. 17 date with the unranked University of Washington Huskies and got pasted, 39-28, in a game that would have been more lopsided were it not for a pair of garbage time touchdowns.

Following that dreadful September day, the Spartans suffered three consecutive double-digit losses — to Minnesota, Maryland, and Ohio State — before righting the ship last week against Wisconsin. Now 3-4 as they prep for a Saturday night matchup in Ann Arbor with fourth-ranked Michigan, the Spartans will be fortunate to be bowl-eligible at season’s end.

A survey of six different mobile sportsbooks in the Mitten State finds Michigan favored by anywhere from 22.5 (BetMGM and FanDuel) to 23 points (BetRivers, Caesars, SI Sportsbook, and WynnBET). To WynnBET trader and Michigan State alumnus Andy Morrissey’s best recollection, the look-ahead spread back before the Spartans’ four-game losing streak was 13, which shows how pronounced the program’s plunge has been.

The over/under for the game is 55 at all of the aforementioned sportsbooks except FanDuel, where the total is 54.5. The best moneyline price for Michigan backers as of Wednesday evening was -2500 at BetMGM and SI, while FanDuel offered the fattest price (+1200) on the Spartans winning outright.

The closest facsimile of Walker that’s set to take the field at the Big House on Saturday is Wolverine tailback Blake Corum, currently tied for the third-best odds (18/1 at WynnBET) to win the Heisman Trophy behind Ohio State quarterback C.J. Stroud (-150) and Tennessee QB Hendon Hooker (+175).

But even if Corum continues his stellar play and the Wolverines beat Stroud and the second-ranked Buckeyes in Columbus in a month, Morrissey doesn’t think the running back will claim college football’s top individual prize “with the quarterbacks out there lighting it up.”

If WynnBET were to set a spread for the Michigan-Ohio State game right now, Morrissey said the Buckeyes would be favored by 10 points. That helps explain why, even though they’re ranked No. 4, the Wolverines have just the sixth-best odds to win the national championship at 18/1.

As for Michigan State, the biggest question that remains in East Lansing this season is how much of Mel Tucker’s fully guaranteed $95 million contract (spread over 10 years) should rightfully be redirected to Walker, seeing as how the ex-Spartan was primarily responsible for his former coach’s eye-popping payday this past offseason. But despite his squad’s porous defense and average offense, Tucker, in Morrissey’s estimation, “has the program on the right track.”

“The process to build a powerhouse,” added Morrissey, “takes some recruiting cycles.”

That or the second coming of Walker.