Can Blake Corum run his way into Heisman consideration? 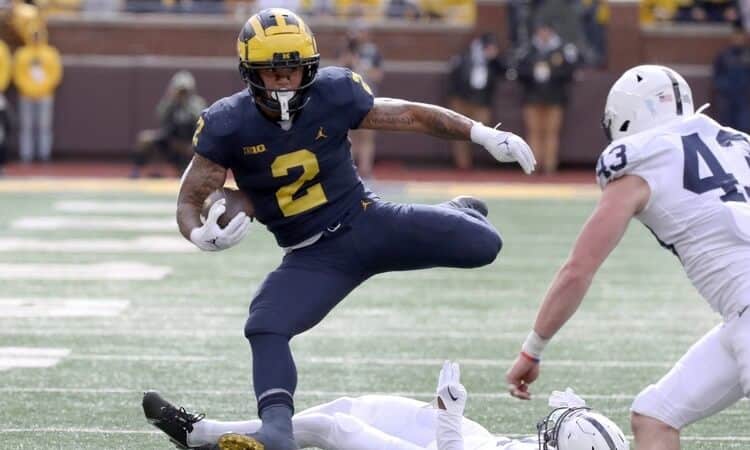 University of Michigan fans were none too pleased when the College Football Playoff Selection Committee released its initial rankings Tuesday. The Wolverines were ranked fifth, behind Tennessee, Ohio State, Georgia, and Clemson.

Given Michigan’s stellar performance to date, there’s reason to question the ranking. At the same time, with games against Illinois and Ohio State left on the regular season schedule, Michigan (8-0, 5-0 Big Ten) has ample time to prove its playoff worthiness. Win out, which would include a win in the Big Ten Championship, and the Wolverines will make the playoff.

FanDuel lists Michigan at +1600 to win the national title, the same odds as Clemson has. The Tigers’ road to the playoff is easier, though, as it doesn’t face a team currently ranked in the CFP Top 25 the rest of the regular season.

Michigan’s road to the College Football Playoff shouldn’t hit a roadblock Saturday. While the team’s November schedule features a pair of games against ranked teams, Saturday’s road matchup at Rutgers could be a cakewalk.

The Scarlet Knights are 4-4 overall, but they’ve struggled mightily against decent teams. Rutgers lost three games against Iowa, Ohio State, and Minnesota by an average of 29 points.

Most sportsbooks expect Michigan to cruise to its ninth win of the season. The Wolverines are a 26.5-point favorite at BetMGM and BetRivers. BetMGM lists the total at 45 points, suggesting Rutgers isn’t expected to score much at all.

Running back Blake Corum could build his Heisman campaign against the overmatched Scarlet Knights, as the 5-foot-8-inch running back has surpassed 120 rushing yards in each of the team’s conference games. He’s +1200 to win the Heisman at Barstool Sportsbook and +1400 at FanDuel.

A path to win the award is there, as any Tennessee loss down the stretch (perhaps to Georgia this weekend) could hurt Hendon Hooker’s hopes, and Michigan faces Ohio State to end the season. If Corum plays well and Michigan beats the Buckeyes, he could vault ahead of OSU’s C.J. Stroud.

Michigan State, which spent most of the week in the news for its post-game brawls with Michigan players, is a significant underdog against Illinois. The Spartans are 17-point dogs across most mobile sportsbooks, including Caesars Sportsbook and PointsBet. FanDuel, meanwhile, has the Spartans as 17.5-point underdogs.

The Fighting Illini have put together a solid season, and they’re a top contender in the Big Ten West despite minimal preseason hype. Illinois wins with defense, and this matchup could be a battle of teams struggling to reach the end zone. The total opened at 44.5 but is down to 41.5 at most sportsbooks. BetRivers has the total at 42 points, while PointsBet sits at 41.