Sportsbooks Install Lions As Favorites For First Time In 24 Games

The Lions are looking for their first win, and Amon-Ra St. Brown is looking to set two records 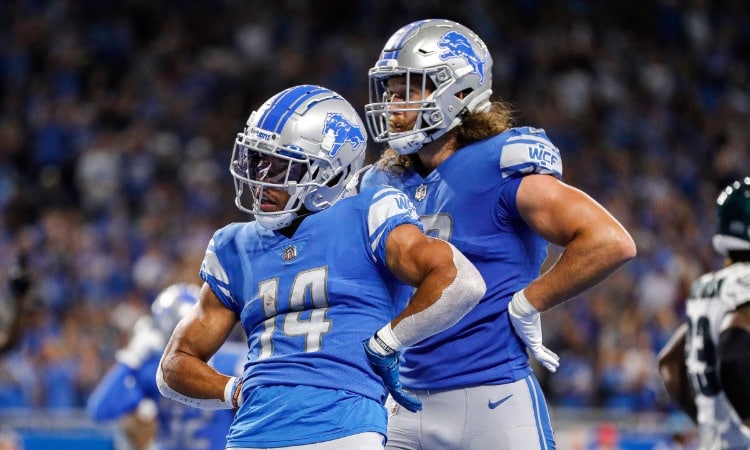 The Lions are favored.

The Lions are favored!

The LIONS ARE FAVORED!

Yes, after 24(!) consecutive games of being the underdog, the Lions have been installed by America’s sportsbooks as -120 moneyline favorites (at PointsBet) over the Washington Commanders.

Favorites. What a world.

it’s been 24 straight games of being the underdog pic.twitter.com/cgYLkP53RU

So: Can the Lions make America’s sportsbooks look smart? Will they be able to hold off Carson Wentz and company?

Well, the answer will come on the field, and one notable line jumps out: The over/under, set at 48.5 (either side at -107, once again, hat tip to PointsBet), is the third-highest total for Sunday afternoon. (Rams-Falcons is at 50, and Raiders-Cardinals at 51). And no wonder: The Commanders moved the ball with ease last week in their 28-22 victory over the Jaguars, and the Lions … well, the Lions lost to the Eagles 38-35. Not exactly a defensive battle, that one.

One major item to watch out for is the health of D’Andre Swift. He hasn’t practiced all week due to an ankle injury, but he told reporters Thursday he plans to suit up come Sunday.

But the sportsbooks — at least as of Friday morning — aren’t so sure, as they’re withholding player props on him.

One player they’re not withholding props on is budding — if not already bloomed — superstar wide receiver Amon-Ra St. Brown, who is seeking to become only the third wideout in history (Antonio Brown and Michael Thomas are the others) with at least eight catches in seven consecutive games. He’s also seeking to set the record for most consecutive games with at least eight catches and a touchdown.

So Amon-Ra St. Brown is currently tied for an NFL record for most consecutive games of 8+ Rec and a receiving touchdown.

He’s also tied for third all time with 7 consecutive games of 8+ Catches.

All while being only 22.

And no one is talking about it.

And his reception prop is set at … well, that’s not yet on the board either, but if it’s 5.5 again, it would certainly seem like a good spot. His receiving yards prop is set at at over 61.5 at DraftKings and Caesars, both at -115.

He’s also at +140 to score a touchdown at DraftKings.

And the books like quarterback Jared Goff to have a good game, as his touchdown passing prop is at 1.5, with juice on the over at -121 at Barstool and BetRivers.

So can the Lions do it? Can they make the bookmakers look smart? Here’s hoping.