Every year, the Super Bowl attracts tens of millions of viewers. Although many people watching are diehard football fans, who regularly seek out the best MI sportsbook promo codes, it’s easy to bet there are many who are in it just for the commercials or Super Bowl halftime performance.

We decided to find out America’s knowledge about the big game by analyzing each state’s “Super Bowl IQ” and most Googled questions about the Super Bowl.

Other top questions were focused on who won the Super Bowl in specific years such as in Arizona, Minnesota and Michigan, where residents often searched for who won the Super Bowl in 2020 (Kansas City Chiefs). While they may be good at taking advantage of casino bonuses at sites like BetMGM Casino, many don’t know that the Green Bay Packers have the most championships with nine championships and four Super Bowls.

Most Googled NFL Questions by State 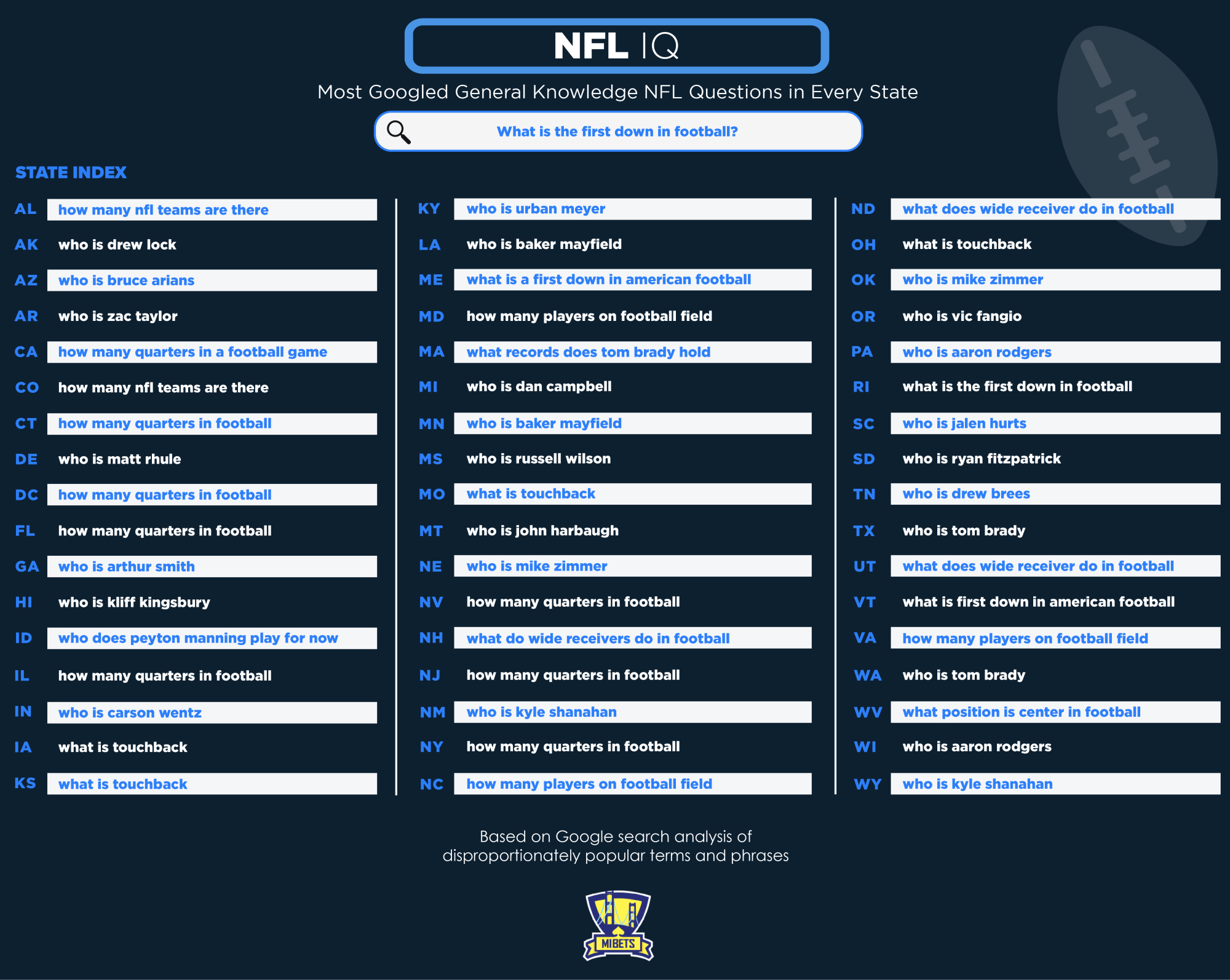 When analyzing general “NFL IQ,” many states were wondering who certain athletes were. The “GOAT,” Tom Brady, may be known to those on the East Coast and in Florida, but both Texas and Washington apparently need to do their research a little more. Even more surprising? Wisconsin’s most Googled NFL question: “Who is Aaron Rodgers?” Let’s hope those Googling live nowhere near the Frozen Tundra.

Other common questions were about the game itself. California, Connecticut, Washington D.C., Florida, Illinois, Nevada, New Jersey and New York all were wondering how many quarters there are in football. Meanwhile, those in Iowa, Kansas, Missouri and Ohio wanted to know what a touchback is and people in Maine, Rhode Island and Vermont were looking to learn what a first down means.

Which States are the Most Eager to Watch the Super Bowl? 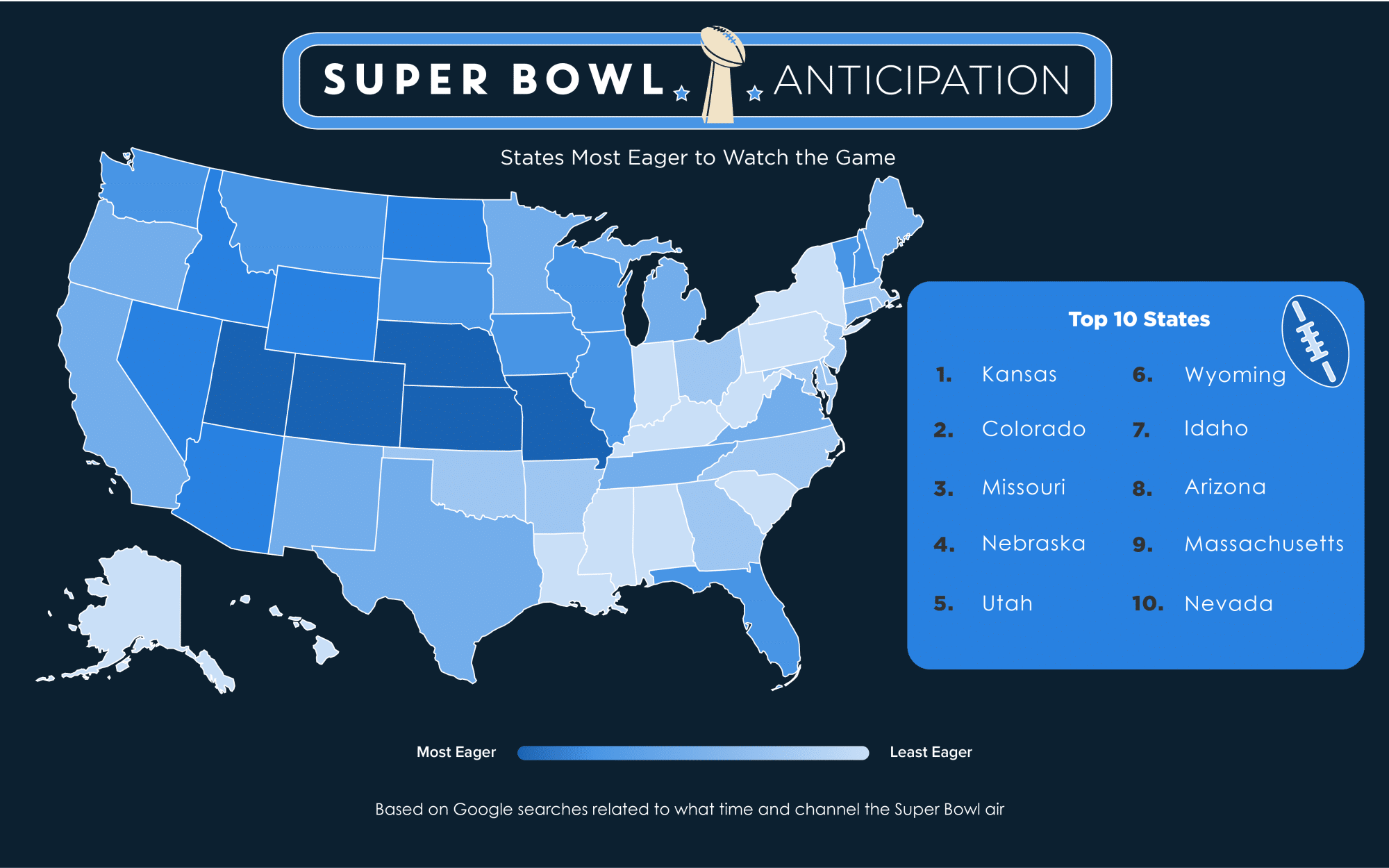 When it comes to watching the Super Bowl, certain states and regions led the pack with their eagerness to tune in. Kansas ranked number one for the most questions about what time the Super Bowl was and what channel it was going to be on. 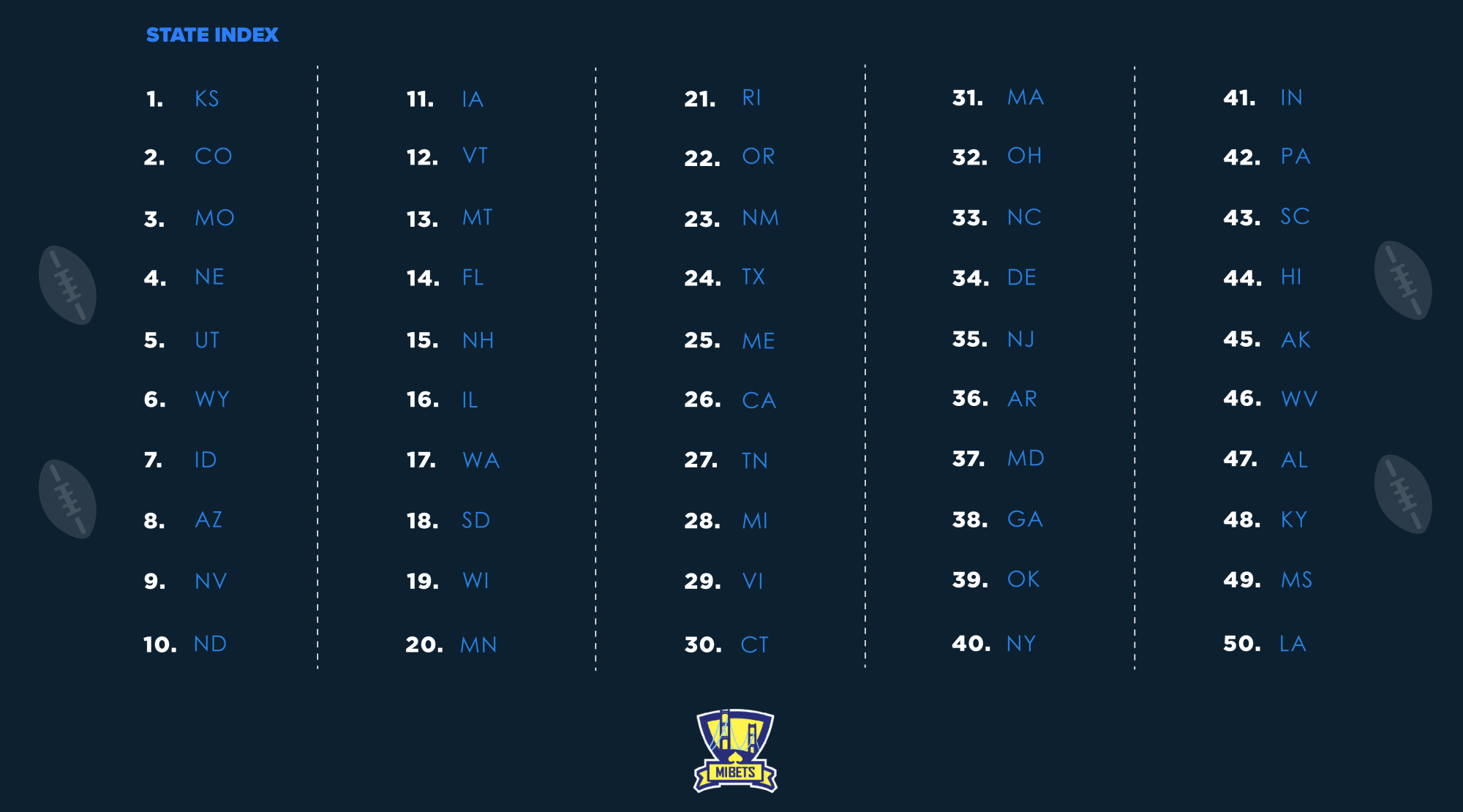 Colorado, Missouri, Nebraska and Utah rounded out the top five, showing America’s heartland to be the most eager to watch the big game.

How Americans Plan to Watch the Super Bowl 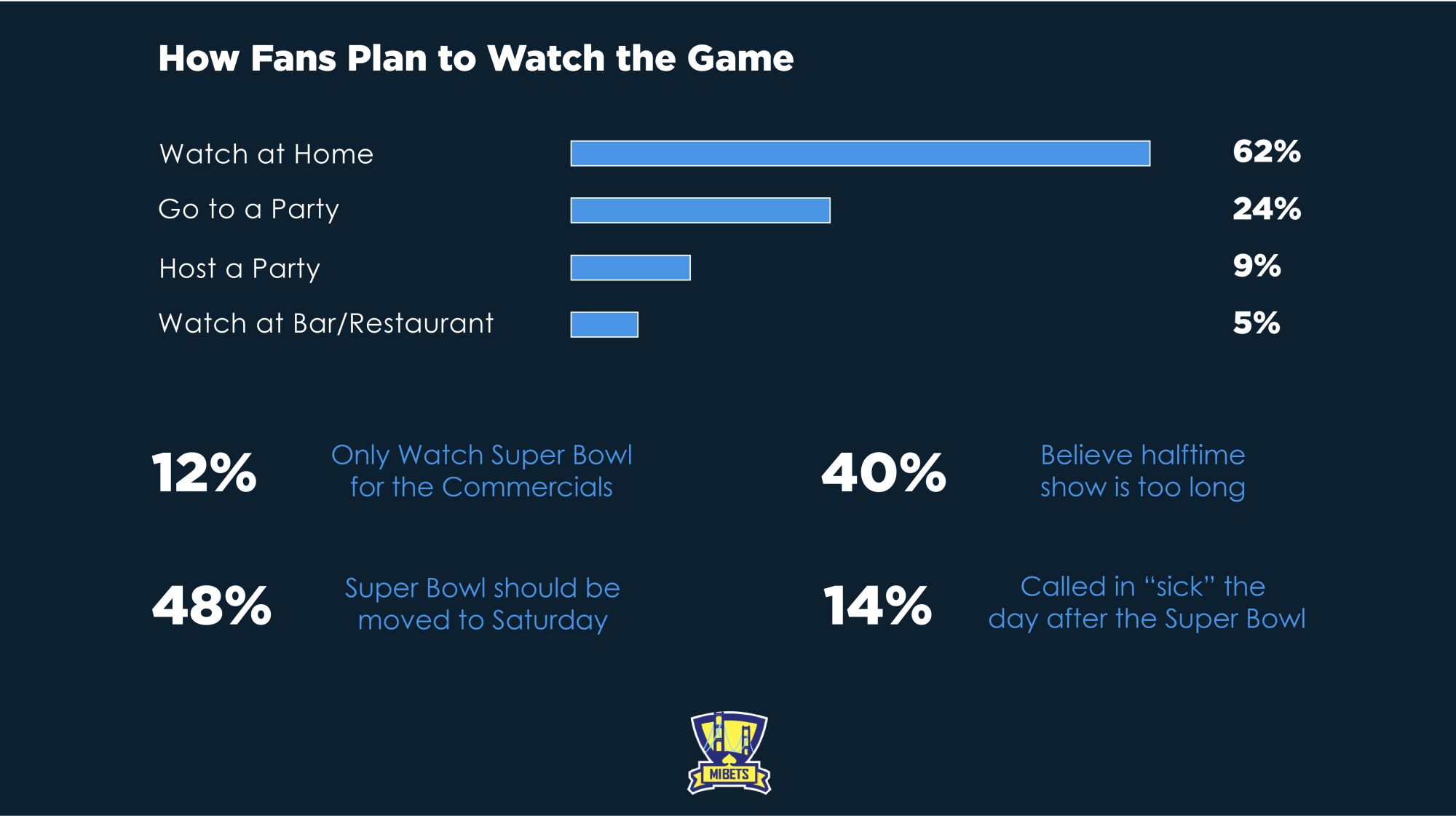 How will you be watching the Super Bowl this year? According to survey respondents, 62% plan to watch this year’s Super Bowl at home. Meanwhile, 24% are going to a party, 9% are hosting the party and 5% plan on watching at a bar or restaurant. Overall, football fans plan to spend an average of $76.99 on food, drinks and miscellaneous items when watching this year’s game.

Nearly half of respondents (48%) believe the Super Bowl should be moved to a Saturday instead of being played on Sunday. The change would likely help the 14% who admit to calling in “sick” the day after the game.

When it comes to entertainment, 40% of people believe the halftime show is too long and one quarter (25%) think the Super Bowl itself is too long. We know the commercials are a big draw for many and 12% say they only tune in for the commercial breaks.

We analyzed more than 4,000 Super Bowl and general knowledge NFL-related search queries using data from the Google Ads platform. Keywords and phrases ranged from general knowledge questions about the NFL and Super Bowl as well as questions related to what time, day and channel the Super Bowl airs. Average search volume was then calculated per capita and visualized per 100,000 for all 50 states across the country. Each state’s most disproportionately popular general knowledge Super Bowl and NFL term is visualized. We also surveyed 2,008 NFL fans across the country to ask them about how they intend to watch this year’s Super Bowl. 50% of respondents were male, 50% were female and the average age was 38.

When using this data and research, please attribute by linking to this study and citing https://www.mibets.com/ 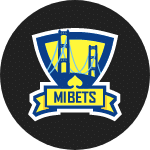