PokerStars, FOX Bet Down Since Friday; Tech Issue ‘Not A Data Breach’ 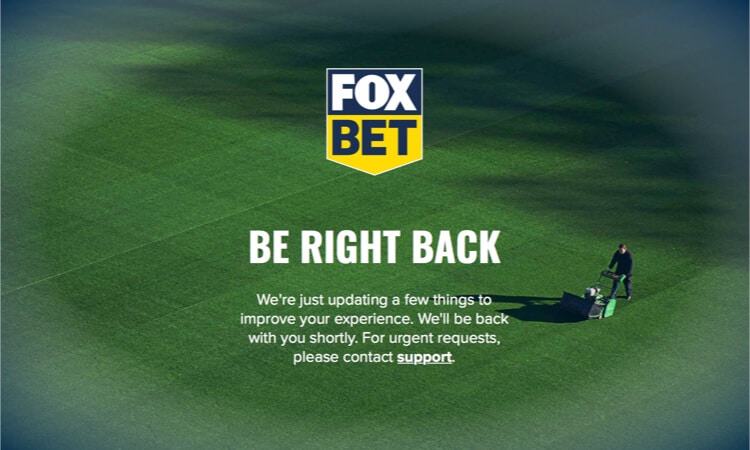 Sports bettors, online poker players, and iCasino players in Michigan hoping to make bets or play games on PokerStars Michigan or its sports betting sister site, FOX Bet Sportsbook, have been out of luck since midday Friday.

Customers logging on to the websites or apps that fall under The Stars Group’s umbrella were greeted with an “unscheduled maintenance” message all weekend, and as of Monday morning, the problem still hasn’t been resolved.

Due to unscheduled maintenance, all MTT's have been cancelled until Monday at 10am EST.
Our apologies for the inconvenience and thanks for your patience. pic.twitter.com/yfHuI5sjYR

“Our sites are currently down due to an unscheduled maintenance issue and our tech team is working hard to get all back up and running ASAP,” FOX Bet Vice President of Communications Eddie Motl shared in a written statement released to MI Bets on Monday. “Customers across all verticals (FOX Bet Sportsbook, PokerStars, and Stars Casino) can still manage their accounts. We do not anticipate any impacts to customer account balances — this is not a data breach. We thank customers for their patience and apologize for this inconvenience.”

As for the question on every player’s mind — when will this issue be fixed? — the answer is uncertain. The Stars Group indicated that it is unlikely to happen before 4 p.m. ET, but that there’s optimism that resolution will come soon after that, possibly in a phased manner, with each vertical coming online separately.

Not the most super of Sundays

There’s never a good time for an online gaming site to experience technical problems. But there are particularly lousy times for it to happen, and The Stars Group does view it as a silver lining that this isn’t happening during Super Bowl weekend. In fact, if you had to pick a weekend during NFL season to lose the ability to take sports bets, last weekend, when the only football game was the Pro Bowl, would probably be your first choice.

Still, missing any Sunday is bad news in the online poker world, as that’s when the biggest tournaments of the week are typically scheduled. As some who voiced complaints about the outage on social media noted, this is especially upsetting if you’d earned a ticket to one of those Sunday tournaments.

It seems safe to conclude, based on responses posted by PokerStars, that those tickets can be transferred. And The Stars Group indicated to MI Bets that once the outage is resolved, there are plans to issue some sort of generous make-good for all customers impacted.

What the operator wants to be most clear about, however, is that account balances are not impacted. Furthermore, despite suspicions stated on Twitter, this is not a hacking situation, and it is currently possible for customers to make withdrawals. The Stars Group would not provide further clarity on exactly what is causing the unscheduled maintenance, unfortunately.

The competition is fierce for sports betting in Michigan, where FOX Bet is one 12 mobile apps available. For online poker, though, PokerStars is one of just two sites operating in the state. One presumes its technical problems aren’t saddening the site’s competitors at BetMGM Poker.

Michigan is one of three states — along with New Jersey and Pennsylvania — in which PokerStars is legal and regulated, and FOX Bet is operational in those same states plus Colorado. The outages are impacting players in all of those states.

UPDATE: PokerStars and FOX Bet came back online in some states just before 6 p.m. ET Monday, and as of Tuesday evening, were fully operational again in all states. “We are back up and running with FOX Bet Sportsbook, PokerStars, and Stars Casino in all states,” Motl said in a statement. “Functionality of our casino offering via website will be forthcoming. We’ve started the process to settle bets and review outstanding free bets as well as promotions. We will be in touch directly with customers soon. We apologize again for the inconvenience.”