A PointsBet Parlay Burger And The Over: Sports Bar Makes Debut For Pistons’ Opener 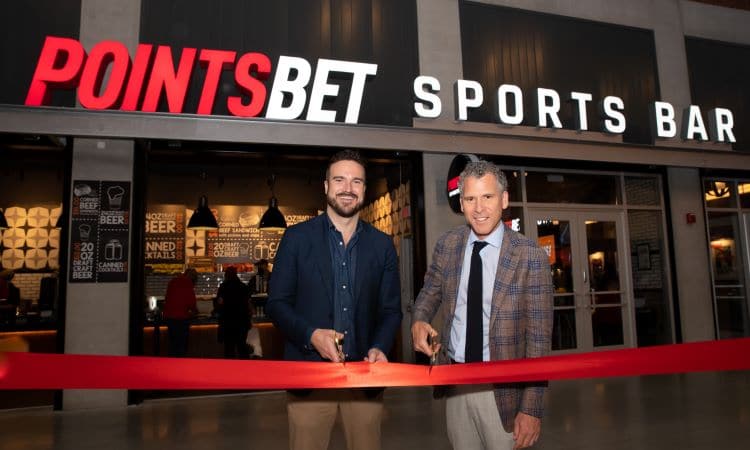 When the Detroit Pistons take on the Chicago Bulls on Wednesday in the NBA season opener for both teams, a Pistons fan at The District Detroit can bet on a full slate of NBA games while sinking their teeth into a PointsBet Sportsbook Parlay Burger.

In time for Wednesday’s opener, the sports betting operator has opened the PointsBet Sports Bar, a 7,200-square-foot, full-service bar and restaurant located on the south side of Little Caesars Arena. PointsBet held a ribbon-cutting ceremony for the establishment on Oct. 14 during the Red Wings’ home opener.

The restaurant will offer a PointsBet-branded menu to patrons, including the aforementioned PointsBet Parlay Burger. PointsBet plans to offer some added promotions for folks ordering food, a company spokesman told MI Bets.

The restaurant, located in a space previously occupied by Sports & Social Detroit, will be open 364 days a year, closing only for Christmas Day. It will feature 28 large-screen TVs and will be open to ticketed and non-ticketed guests. Multiple TVs located throughout the space will offer integrated live odds with real-time updates on an assortment of sports.

The District Detroit is a 50-block entertainment area located in proximity to the city’s top sports venues. Besides Little Caesars Arena, home of the Pistons and the Red Wings, the district is located approximately a quarter-mile from Comerica Park and half a mile from Ford Field. Comerica Park is home to the Detroit Tigers of MLB, while the NFL’s Detroit Lions play their home games at Ford Field.

Hey, Detroit! This Wednesday 10/20 I’ll be at PointsBet Sports Bar at Little Caesars Arena. Be there at 5:15pm ET to come say hi and take a photo! @PointsBetUSA pic.twitter.com/LRCrIdmkQw

The full-service bar is a larger extension of PointsBet’s partnership with Olympia Entertainment, PointsBet said. Olympia Entertainment is a division of Ilitch Holdings Inc., which owns Little Caesars Pizza, the Red Wings, and the Tigers. PointsBet became an official sports betting partner of the Tigers in September, eight months after it reached a deal to become an official gaming partner of the Red Wings.

“It was essential for us to provide a venue for the community in District Detroit,” the PointsBet spokesman said.

After finishing an Eastern Conference-worst 20-52 last season, the Pistons have a long rebuilding project ahead of them. Detroit selected Oklahoma State guard Cade Cunningham with the first overall pick in the 2021 NBA Draft and added veteran forward Kelly Olynyk in free agency.

Detroit has odds of 300/1 at PointsBet to win the NBA title and odds of 150/1 to win the Eastern Conference championship. PointsBet also has odds of +240 on Cunningham to win Rookie of the Year honors. Cunningham is a slight favorite over Rockets guard Jalen Green (+245).

Cade Cunningham was the No. 1 pick, but can he also be the Rookie of the Year? That hasn't been the case the last few seasons for the top picks.@Kkylewood has the odds and the breakdown of which rookie to bet on: https://t.co/CsfXJzKPxv

Cunningham is ranked 75th by NBA.com in its fantasy basketball rankings of the top 150 NBA players for the 2021-22 season. The point guard, according to the site, should emerge as the team’s “top scorer and playmaker.” Orlando guard Jalen Suggs is the next highest rookie at 105th, followed by Cleveland center Evan Mobley at 120th and Green, who is ranked 130th.

The Pistons are a 5-point underdog against the Bulls at PointsBet, with a total of 218.5 points. Detroit also has moneyline odds of +170 to win straight up.