Michigan-Ohio State Has Game Of The Century Vibes 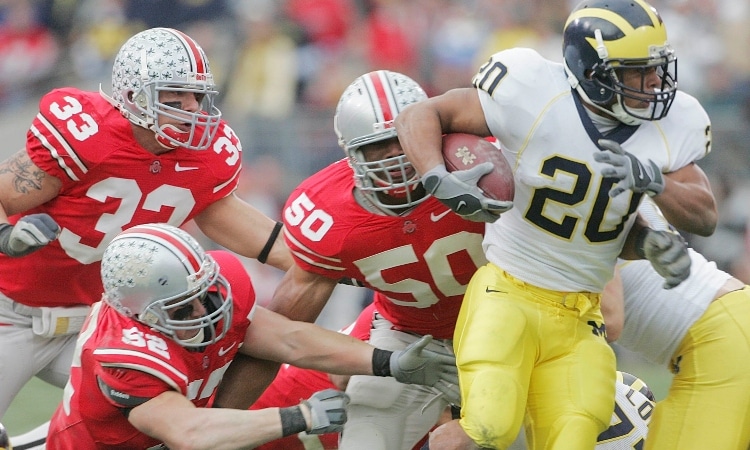 Michigan-Ohio State football is a big event any year. There’s a reason they simply call it The Game, after all. It’s one of the greatest rivalries in all of sports, let alone college football.

But this season? Mega-matchup and the fulcrum for the entire College Football Playoff, potentially.

The stakes are clear: a wide-open path to a CFP berth. The winner of Saturday’s clash will advance to the Big Ten championship game on Dec. 3 in Indianapolis to take on a potentially overmatched West Division team. The loser Saturday could also still qualify for a playoff berth, but it most likely would require losses by other highly ranked teams.

Michigan’s online sportsbooks opened the game at Ohio State -8.5, but it was bet down to as close as -7.5 as of Wednesday. Those liking Michigan could get it at +8 at BetRivers and UniBet.

The total opened at 61.5, but it was bet down to 56 at most places and 56.5 at BetRivers. Weather shouldn’t be an issue, with the forecast calling for a temperature in the low 50s and no precipitation.

Michigan snapped an eight-game losing streak in the rivalry by beating Ohio State 42-27 last season in Ann Arbor. Michigan still holds a 59-52-6 all-time edge in the series. The 2020 game was canceled due to COVID-19 concerns, but otherwise the game has been played every year since 1918.

The last three times the teams were both undefeated heading into the game produced the following results:

Ohio State was the Associated Press poll’s top-ranked team before this game on Nov. 21, with Ohio State coming in at 8-0 and Michigan bringing a 9-0 record into the contest. The Buckeyes’ win – their 31st in a 32-year run – didn’t necessarily carry them where they were hoping to go. Ohio State finished fifth and Michigan finished ninth.

Again, Ohio State was the No. 1 team in all the land with Michigan ranked fourth. With more than 105,000 fans packed into The Big House, Michigan overcame a 10-0 deficit in the fourth quarter to escape with a tie. After the game, the Big Ten decided Ohio State would represent the conference in the Rose Bowl, where it beat USC 42-21. Ohio State finished 10-0-1 and was ranked second. Michigan also finished 10-0-1 and was ranked sixth.

We’re finally getting to a game that had similar national ramifications. Ohio State was the top-ranked team coming into the 2006 game while Michigan was No. 2. The game was billed as the “Game of the Century,” which of course can’t be true now, right? It turned into a shootout in part due to huge games from Ohio State quarterback Troy Smith and Michigan running back Mike Hart. Ohio State would make the BCS title game but lose to Florida, while Michigan would lose to USC in the Rose Bowl.

In many ways, these teams are designed to beat one another. Michigan will try to replicate last year’s game by running wild again. The Wolverines ran for 297 yards and averaged 7.2 yards per carry against a fairly weak Ohio State run defense. The problem is, Michigan’s two best running backs, Blake Corum and Donovan Edwards, are dealing with injuries, which could thrust third-stringer C.J. Stokes into the mix. Also, Ohio State revamped its run defense after last year’s game and has allowed an average of just 107.9 yards rushing per game.

Ohio State also likes to run the ball this season, and Dallas Hayden is an explosive back coming off back-to-back 100-yard games vs. Indiana and Maryland. Michigan has an excellent defense, but it is coming off its worst performance of the season in terms of stopping the run. Illinois managed to pick up 148 rushing yards in Week 12.

Another key question: Can Michigan get consistent pressure on quarterback C.J. Stroud now that Aidan Hutchinson is doing his thing for the Detroit Lions? Getting pressure on Stroud will be crucial since very few secondaries can handle receiver Marvin Harrison Jr. when Stroud has time to get him the ball downfield.

Harbaugh has remained mum all week about the status of Corum and Edwards, but it’s hard to see Michigan pulling off an upset on the road if it can’t control the clock by running the ball consistently.

Because of the uncertainty involving running back injuries, one of the only rushing-yards props being offered at DraftKings is Michigan quarterback J.J. McCarthy to gain over/under 12.5 yards. Sacks count against a QB’s total in college, but Ohio State has just a so-so pass rush and McCarthy has hit the over for rushing in three of his last four games.

Michigan receiver Cornelius Johnson has finished under the sportsbooks’ receiving-yards total for him in 12 of his last 17 games. That could be a good play here, with Johnson’s number set at 32.5 by DraftKings. He’s picked up that many yards just once in his last four games.

Stroud has hit the over on his touchdown pass total in nine of his last 11 games, and this week it’s set at 2.5 (-130 at DraftKings). That’s certainly an achievable number, though he’ll likely have more trouble than he did against the likes of Indiana, against whom he threw for five TDs, or Michigan State, which allowed him to throw for six.