Who Are The Biggest Complainers In The NFL?

Even with a new year and a new football season, some things remain the same.

Quarterbacks will throw the ball, touchdowns will be made, and referees will throw the penalty flag. And of course, people will still complain and whine over some of those calls and touchdowns, as is tradition in the NFL. Regardless of who’s doing the complaining, this unsportsmanlike conduct is unbecoming of players, coaches, and fans alike.

Last year, we determined which NFL fan base was guilty of complaining the most, and this year we sought to do the same. We surveyed over 2,000 NFL fans across the country to identify this year’s biggest complainers in the league.

Which NFL Fans Complain the Most? 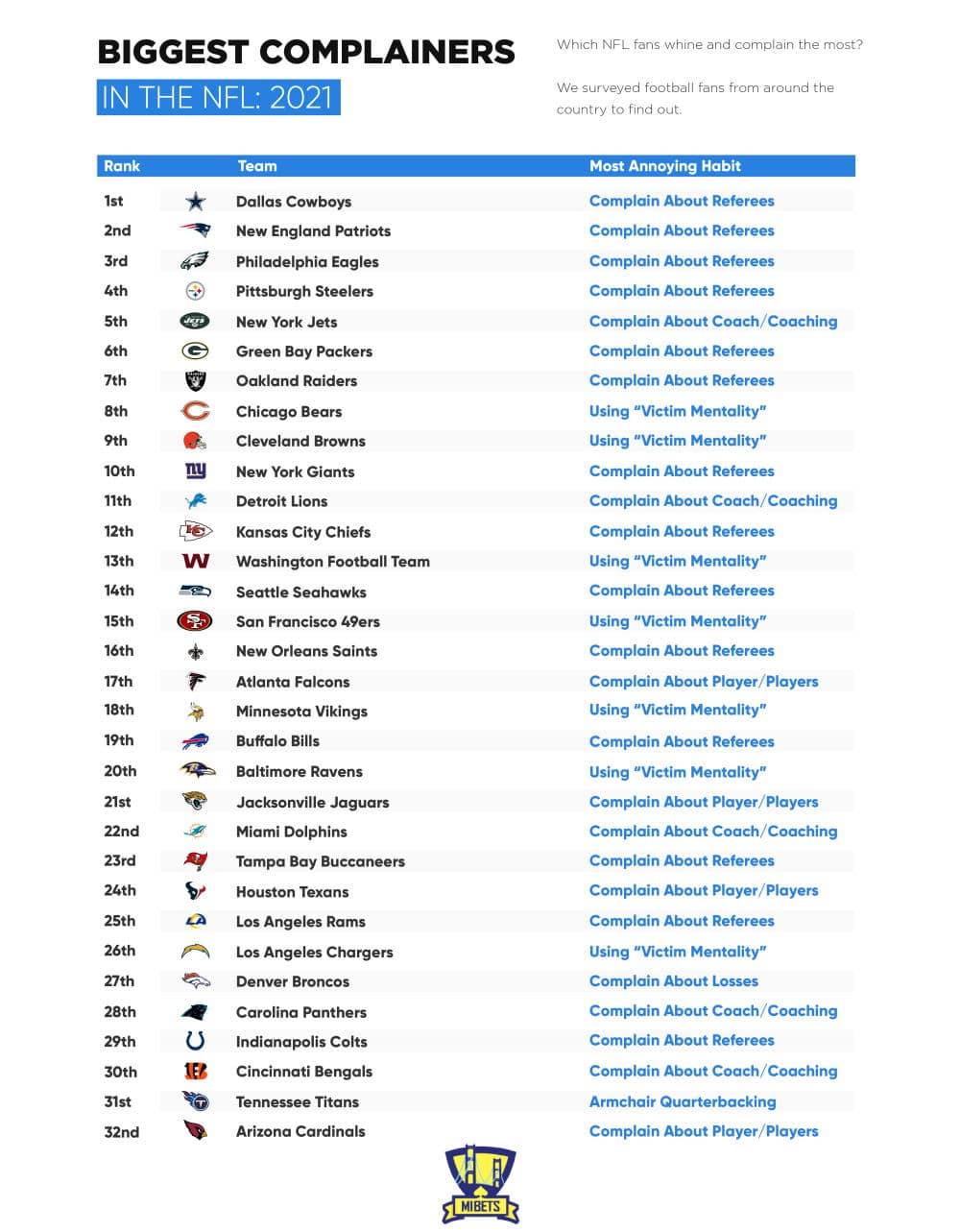 When we asked fans to tell us which team’s fan base complains the most, respondents did not hold back. Once again, the Dallas Cowboys top the list, ranking as the single worst fan base in the NFL when it comes to whining. Respondents say it’s most often due to complaining about the referees.

Fans of the New England Patriots followed closely behind, once again ranking second as the fan base whose team complains the most.

But new to the top five this year, fans of the Philadelphia Eagles, Pittsburgh Steelers, and New York Jets have made the list as fan bases that complain the most.

For teams that complain the least, we have the Carolina Panthers, Indianapolis Colts, Cincinnati Bengals, Tennessee Titans, and the Arizona Cardinals.

It’s not just fans of the NFL that complain or whine about games. Prominent figures on the field, like quarterbacks and coaches, are also known for how they react to certain calls or game outcomes.

The former New England Patriot and current Tampa Bay Buccaneer was yet again ranked as the worst quarterback in the NFL when it comes to complaining, according to fans.

But this year he’s followed closely by the Green Bay Packers’ hero Aaron Rodgers. Ben Roethlisberger (Steelers), Baker Mayfield (Browns), and Patrick Mahomes (Chiefs) round out the top five quarterbacks who were voted as the worst complainers by NFL fans.

Like their players, coaches are just as guilty of complaining. Chances are you’ve seen a coach shouting from the sidelines, screaming at officials, or even throwing down their headsets. It may not come as a surprise, but just as he won last year, Bill Belichick of The New England Patriots claims the award for whiniest head coach. He’s followed closely by Pete Carroll (Seahawks), Urban Meyer (Jaguars), Mike McCarthy (Cowboys), and John Harbaugh (Ravens).

Whether you’re a fierce follower of the NFL or a fair-weather fan, these results might make you think twice before whining about the next bad call or posting about it on social media.

In October 2021, we surveyed more than 2,000 NFL fans to determine which NFL players, coaches and fan bases complain the most. 50% of respondents were male and 50% were female. The average age of respondents was 34 years old.

When using this data and research, please attribute by linking to this study and citing https://www.mibets.com/