Michigan’s National Championship Odds Cut In Half, But Big Ten Title May Be Better Bet

As the end of the season approaches, the Wolverines offer some intriguing futures odds 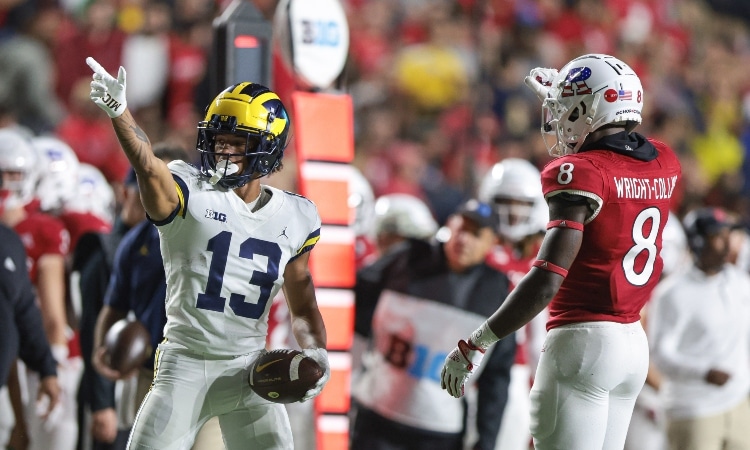 Phil Steele, who has been previewing college football for nearly 30 years, wrote this about the Michigan Wolverines before this season while crediting them for having the best offensive line and special teams in the country: “They will likely need to be 11-0 when they travel to Columbus, but will need to win there for the first time since 2000. If they do, they are a national title contender.”

Well, lookee here — the Wolverines are 9-0 with a game this weekend at home against Nebraska. They are 31-point favorites at most sportsbooks, including Caesars. If they win that, their quest continues with another home game against Illinois, which is currently ranked No. 21. They figure to be double-digit favorites in that one, too. Illinois is rapidly improving, but winning in Ann Arbor these days is a hard assignment.

If Michigan wins those games and makes it a second straight win against the Buckeyes after 10 straight losses in the rivalry, could this be the season Michigan wins its first national title in a quarter century?

The Wolverines moved from No. 5 to No. 3 in the College Football Playoff Rankings thanks to losses by Tennessee and Clemson last week.

Michigan (+800) is the No. 3 choice to win the national championship in many places (including DraftKings), but they’re a distant third behind Georgia (even money) and Ohio State (+200). The next three favorites are Tennessee (+1200), Oregon (+2500), and LSU (+4000). Essentially, the sportsbooks are begging people to pick anybody other than Georgia or Ohio State.

Could Michigan be the smartest shot in this spot?

You could certainly make a case, though it would be something of a shame to jump on the maize-and-blue bandwagon this week given that their title odds fell from +1600 to +800 (at FanDuel) over the weekend, which had more to do with the Tennessee and Clemson losses than their own 52-17 win over Rutgers.

Winning a national championship is a lot harder than it used to be, what with conference championship games and the subsequent playoff. Remember, even if Michigan wins at Columbus, it still has the Dec. 3 Big Ten championship game in Indianapolis, likely against Illinois.

If you’re nervous about Michigan’s chances when it runs into an SEC team in the playoffs, a conference title wager might be the way to go. The sportsbooks clearly think Ohio State is going to be tough to knock off at home because the Buckeyes are prohibitive favorites to win the Big Ten title (-400 at DraftKings), while the Wolverines can be had at +350 (and Illinois at +1800).

That’s a pretty massive spread considering this conference very easily could come come down to that one game in Columbus. Rather than bet the Wolverines on the moneyline against the Buckeyes, you potentially could get better value by betting on Michigan to win the conference. While Michigan figures to be the underdog against OSU, it’s unlikely they’ll be +350 in that contest.

Incidentally, the projection site FiveThirtyEight gives Michigan a 12% chance of winning the national title, which converts to +733 odds — so the +800 price seems fair.

To make the playoffs

DraftKings lists Michigan at +140 to make the College Football Playoff, with “no” being offered at -175. This bet is another way to squeeze a little value out of the Wolverines if you’re expecting big things.

FiveThirtyEight gives Michigan a 44% chance of making the field of four for the CFP, a probability that converts to +127 odds — so the DraftKings offering appears to be worth a look.

The conference title odds are still probably the way to go if you want to ride Michigan the remainder of the way, however, as it’s unlikely Ohio State and Michigan would both qualify for the CFP even if they both go into the game at 11-0. So you’re better off grabbing +350 than +140 when they largely rely on the same set of outcomes.