With LED displays and personal touch screen terminals, the 'Roll To Win' craps table at Four Winds Casino is proving a quick hit to patrons. 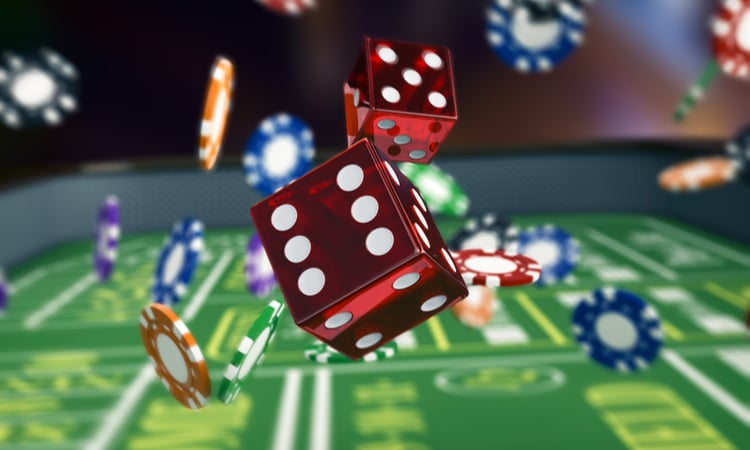 In an area where green felt is the norm, blue immediately stands out, even at a distance.

Upon closer examination, there is the discovery the tub is not felt, but a computer-generated display. There is the oddity of not seeing chips placed anywhere, and the visual stimulation of bright LED lights at first glance is a jarring contrast to the softer colors painted on that green felt representing bet types and combinations.

Finding something that stands out in the table gaming area

Craps tables are standard in the sense people stand around them, and there is a tub area for placing bets and shooting dice. One other fact about craps tables is they are designed to stand the test of time. Four Winds Vice President of Table Games Chris Schneider estimated a typical table has a shelf life of 20 to 25 years unless the design is changed.

And what he saw in Las Vegas in 2018 most certainly was a change in design.

“(Roll To Win) was showcased at the Gaming Convention in Las Vegas,” said Schneider, offering the origin story of how the table came to be at Four Winds. “They had a prototype and we wanted one immediately, but it took a while. We placed a card and we were the third property nationally to have one.”

“At Aruze, we created Roll To Win craps and it’s the most successful electronic table game in the market,” said Laura Sims, manager of product management and sales promotion with Aruze Gaming. “As a company, there is a strong history with craps as a concept overall. We also have leadership that is passionate about craps and the concept of bringing craps into the new century, making it exciting for younger players.”

Seeing it at a convention is one thing. Acquiring one for Four Winds was another. The two sides reached agreement on a lease deal in 2019, but the casino did not have “Roll To Win” on the gaming floor until January. Schneider then went through a series of aesthetic trial and errors in order to find what worked best for both dealers and patrons.

“We just took advantage of the very extensive visual excitement,” Schneider said. “It was very exciting to try the different colors. I’m a traditionalist and preferred green (for the tub), but after the first two days we discovered the blue layout was pleasing for dealers and guests.”

The table was a quick success story for craps players of all skill levels upon its introduction. Schneider noted high rollers will occasionally reserve half or the whole table in the early hours of the morning for solo runs, and the touch screens help “tailor make it to personal betting styles.”

Those touch screens, according to Nathaniel Holt, Aruze Gaming America’s Director of Sales, help broaden the appeal of craps to newer players.

“Players like the anonymity of playing the game,” he explained. “There’s still a social aspect, but where they’re betting, their strategy is in front of them and they’re shunting out what other players are doing. (Other) players don’t know how much you’re betting.”

Craps in a time of social distancing

A craps table arguably has the most frenzy and public emotional reactions among patrons at table games during normal times, creating one such intimidation factor. A second one unexpectedly came with casinos dealing with novel social distancing rules upon reopening after being shuttered for months due to the COVID-19 pandemic.

There can be as many as 10 total people at a typical table at 50% capacity when counting employees, but “Roll To Win” allows pit bosses to run a table with only one dealer. Additionally, the ability to control access to the terminals provides an easy method of enacting social distancing.

“With the terminals, it’s similar to slots,” Schneider said, “and we can shut down terminals and encourage players to use proper spacing.

“We were fortunate enough to watch other casinos (open) prior to us and learn trends. We did see them shy away from plexiglass on table games. Some when offered the choice, gravitated to non-plexiglass where there’s no shield in front of the table.”

One other benefit of “Roll To Win” — patrons and dealers are not handling chips, which lowers common touch points between the two groups.

A happy match with no signs of slowing down

Both parties also pointed out how “Roll To Win” helps pace of play. Schneider noted the average table has “60 to 70 rolls per hour,” but it can also slow down to “35 to 40 when a table is hot and a lot of bets are placed.” Sims pointed out the touch screens for both patron and dealer “lessens the time between games and rolls are faster … with a hot shooter everyone knows you want it to move fast.”

Without delving into financial specifics, Schneider said the per spot lease deal Four Winds signed is “comparable to slot machines, and we’re having good results.” Holt said Aruze Gaming will continue to only lease “Roll To Win” as part of its financial model and has turned down offers from casinos to buy units it has proven so popular.