The Lions and their opponents are scoring at record-setting pace — will it continue against the Pats? 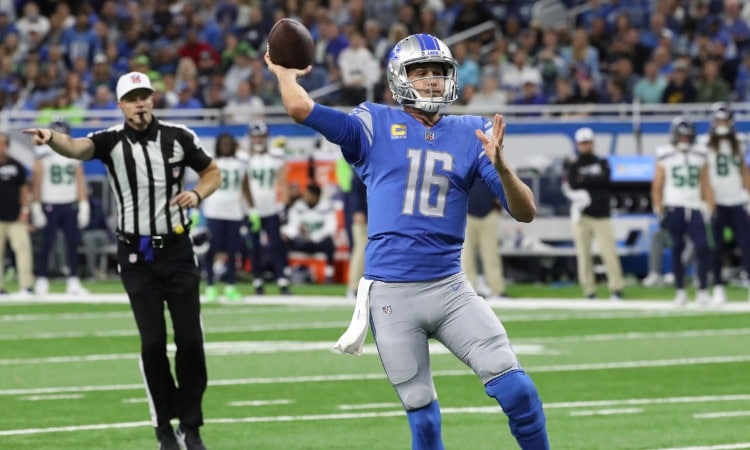 Through the first four games of the 2022 NFL season, the Detroit Lions are — almost inarguably — the most exciting team in the NFL.

Through the first month, the Lions are averaging 35 points per game, and allowing another 35.3 points per game. Even in a year where league-wide scoring is down, the Lions and their combatants have scored more combined points in the first four games of the season than any other team in the history of the NFL.

Detroit’s 281 combined points + points allowed are the most by any team in the first 4 games of a season in NFL history.#OnePride

So while the Lions are 1-3, at least fans are safe in the knowledge history is being made.

This week, the Lions take their version of the “greatest show on turf” to Foxboro, Massachusetts, for a road tilt against the Bill Belichick-led New England Patriots, who might be trotting out their third-string quarterback (rookie Bailey Zappe) in a game the sportsbooks think might bring the Lions back down to earth.

The over/under is set at a pedestrian 45.5, with PointsBet holding the best price on either side at -107. The Lions are also 3-point underdogs, with PointsBet and its standard NFL -107s holding down the fort. As of this writing, however, you can grab the Lions +3.5 at FanDuel for -115.

On the moneyline, the best bet for Lions backers is +145 at BetMGM.

Props are light so far

Clearly, if the oddsmakers are correct, Belichick and the Patriots’ path to victory will be to hold onto the ball and run the Lions out of town. And it’s not a terrible plan, as the Lions are giving up the third-most rushing yards per game (165.5) and the most yards per carry (5.6).

If that’s the way this game plays out, then betting on the Patriots’ 1-2 punch at running back — Rhamondre Stevenson and Damien Harris — to find paydirt seems like a decent play.

As of this writing, only DraftKings has posted “anytime touchdown” props, and Stevenson’s is set at +135, Harris’ at -110.

But if the Lions can do what the Lions have been doing all season — with or without D’Andre Swift and Amon-Ra St. Brown, both of whom are almost certainly out — then taking a look at Jared Goff’s passing yardage prop (once it’s released) would be prudent, as he’s hit the over in his last three games.

The prop market, as of Friday morning, is mostly barren for this game, certainly due to the Swift and St. Brown injuries (as well as D.J. Chark and seemingly every other Lions skill player), but also due to the questions surrounding the health of Patriots quarterback Mac Jones.

Any way it’s sliced, however, heading to Foxboro is not going to make it easy for the Lions to head into their Week 6 bye on a high note.

One thing, however, is nearlyy certain: It will be an entertaining ride.