Lions On A Roll Heading Into Clash With Heavily Favored Bills

Despite a three-game winning streak, Detroit is a 9.5-point home underdog to Buffalo 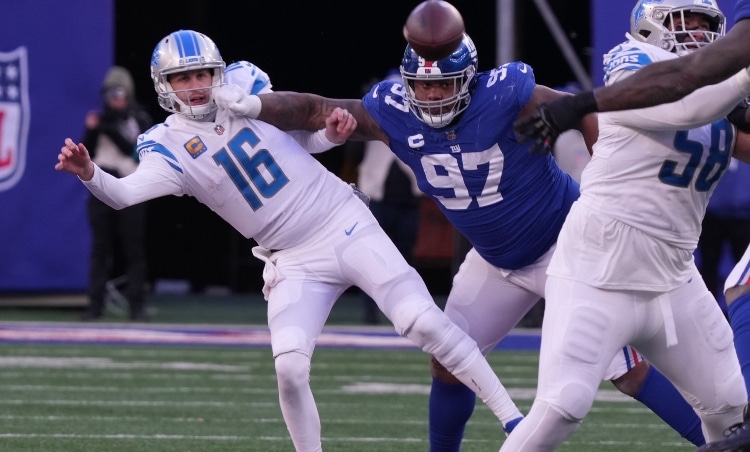 The Detroit Lions have a lot going for them all of a sudden.

Not only has head coach Dan Campbell’s group won three games in a row, the franchise’s first such winning streak in five years, but after their traditional Thanksgiving Day game, it has one of the easiest remaining schedules in the NFL. Oh, and they’re getting healthier. One of the most explosive athletes in the NFL, first-round pick Jameson Williams, returned to practice this week and is scheduled to make his debut at wide receiver soon.

Hence, it’s not out of the question that the 4-6 Lions could make a run at their first playoff berth since 2016, which would be impressive given their brutal start.

Before any of that happens, though, they have to figure out how to solve a strong Buffalo Bills team that has been in town longer than they have. Because of the massive snowstorm that hit Orchard Park last week, the Bills played the Cleveland Browns at Detroit’s Ford Field (and beat them 31-23) and stuck around to wait for this game. Meanwhile, the Lions didn’t get back until Sunday night after their 31-18 win over the Giants in the Meadowlands.

The Bills are co-favorites with the Kansas City Chiefs at +450 to win the Super Bowl (at DraftKings), so it’s not surprising that they are nearly double-digit favorites against the Lions. This game opened at Bills -9.5 across the board, but it has ticked down at some mobile sportsbooks – including BetRivers – to Bills -9.

Bear in mind that home underdogs are hitting at a 55.6% clip against the spread (ATS), only slightly worse than away ‘dogs (56.8%).

If you’re brave enough to bet the Lions moneyline, your best play is FanDuel, which is offering it at +360. If you want to bet the Bills without laying the points, your best value is PointsBet, where they are -400.

Traditionally, the Lions play a team from the NFC North on Thanksgiving, but the NFL has switched up its matchups to add an extra game on Thanksgiving. This is Detroit’s first game against the Bills since 2018.

As impressive as Buffalo has been, its offense has shown signs of fallibility in recent weeks. While the Bills scored on their final seven possessions against the Browns, six of those were field goals. Quarterback Josh Allen struggled early, and the Bills were largely bailed out by a rushing game that was facing a Browns run defense that is among the most porous in the NFL.

Unfortunately for the Lions, their run defense is even worse, ranking 31st in the NFL with 153.8 rushing yards allowed per game. The Lions could be in trouble if Devin Singletary and James Cook continue to grind out yards and Allen breaks off some lengthy scrambles. Singletary and Cook combined for 172 rushing yards against Cleveland, while Allen didn’t need to leave the pocket much.

The Lions were able to load up the box to contain Saquon Barkley, who managed just 22 yards on 15 carries this past Sunday, but that’s going to be difficult with Allen at quarterback rather than the Giants’ Daniel Jones.

On the other side of the ball, the Bills have struggled the past two weeks against the pass, and Detroit might take advantage of its strong pass protection to let Jared Goff air it out a bit. He’s had a good connection with Amon-Ra St. Brown, who has 56 catches for 594 yards and three touchdowns. Meanwhile, the Bills might be without two of their strongest pass rushers in Greg Rousseau and A.J. Epenesa.

The Lions will need to get Jamaal Williams going to some extent to keep the Bills defense honest, but it could also help that Buffalo linebacker Tremaine Edmunds might be out.

The total, which opened at 52, has crept as high as 54.5 at some books, including WynnBET. Bear in mind that the teams’ last four meetings have produced aggregate point totals of 27, 31, 26, and 37 points.

There’s not a lot to go on in terms of trends, but it feels like the Lions might be able to dictate the pace here. If they’re able to score with Buffalo, Sean McDermott will have to push Allen and the offense a bit more than he had to against Cleveland last time out.

In light of Detroit’s spotty run defense, Singletary’s rushing yards going over 57.5 (at DraftKings) might be worth betting. If that number is too high for your tastes, consider betting on Goff to rush for more than 3.5 yards, a number he has eclipsed five times already this season. The Lions offense has averaged 26 points per game in their last four outings, so it’s worth taking a long look at their team total (21.5 at DraftKings) or laying -120 on them to score more than 2.5 touchdowns.