Five teams are favored over No. 4 Wolverines to win national championship 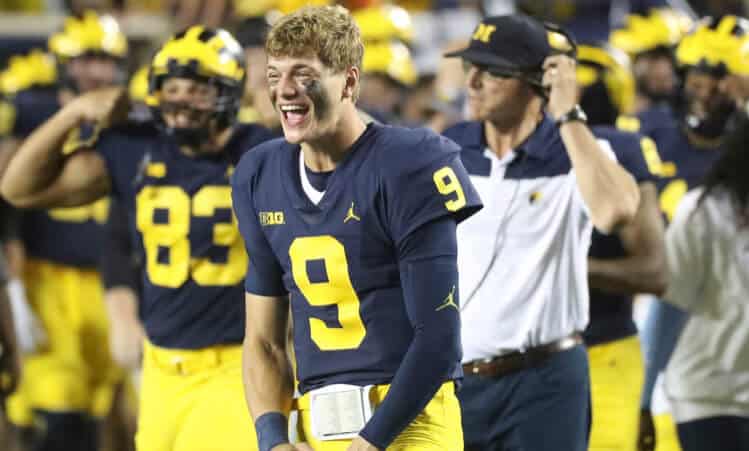 The University of Michigan football team, ranked fourth in the country, has started the 2022 season 3-0 in non-conference play, besting its opponents by a combined score of 166-17. The Wolverines’ first string features a dual-threat quarterback, J.J. McCarthy, who’s completed 88% of his passes while averaging more than 10 yards per carry, and a tailback, Blake Corum, who’s already run for seven touchdowns.

Sounds like a team befitting such a lofty ranking, doesn’t it? Yes and no. While it’s true that the Wolverines remain undefeated, their competition — Colorado State, Hawaii, and UConn — has been of the cream puff variety, and they’ve yet to play on the road. And while McCarthy has looked fabulous, Saturday’s home matchup against Maryland will mark the nimble sophomore’s first Big Ten start.

This helps explain why five teams — including Clemson and USC, which rate behind Michigan in the AP poll — have shorter odds than the Wolverines (25/1 at WynnBET) to win the national championship.

“[Coach Jim] Harbaugh obviously did it (schedule a soft non-conference schedule) for a reason,” said WynnBET trader Andy Morrissey. “If you’re undefeated, one loss, you’re still going to have to win the Big Ten to get the invite. Michigan State, if they beat a Washington and had one loss, that could probably get you in, but really, winning your conference, it’s all in front of you. It makes sense to me, but I can see how it looks cowardly to fans.”

Spartans a home ‘dog against Gophers

Of course, Michigan State — Morrissey’s alma mater — most assuredly did not beat Washington in a 39-28 loss that wasn’t as close as the final score indicated. As a result, the 2-1 Spartans, ranked 11th heading into that showdown in Seattle, have dropped out of the AP Top 25 and find themselves a consensus 3-point home underdog against 3-0 Minnesota this Saturday in East Lansing.

The over/under for the game is a consensus 51 points, with PointsBet offering slightly reduced juice (-107) both ways. The best moneyline value that can be found on the Spartans is +125 at PointsBet, WynnBET, BetMGM, and BetRivers.

“We opened them at a pick, and then the Gophers kind of hammered Colorado,” Morrissey said in explaining the line shift. “We’re probably gonna need Michigan State again, so hopefully they pull through for us and myself.”

Morrissey added that Minnesota head coach P.J. Fleck “always coaches [the Gophers] up,” which was something Michigan State head coach Mel Tucker failed to do in the Washington loss. That’s sort of an issue because, late last season, school brass tore up Tucker’s contract and handed him a fresh deal worth a fully guaranteed $95 million over 10 years. Only Alabama’s Nick Saban makes more dough annually.

It’s foolhardy to think, then, that Tucker has anything less than ironclad job security at this point. But should the Spartans drop, say, two of their next three games — following the Minnesota tilt, they’ll visit Maryland before facing No. 3 Ohio State at home — might “Brink’s” Tucker’s seat start to feel a little sweaty?

“I think he’ll be fine,” said Morrissey. “The program’s in good hands under him. I like what he’s got going. They still fought against UW, kept it respectable at the end. That was a good sign. Minnesota will be a tough test. They’ve been pretty good to start, but have also played a cupcake schedule.”

Of greater concern to State faithful might be the team’s ground attack, with leading rusher Jalen Berger managing just 27 yards on 13 carries against Washington. On the bright side, while Berger’s struggling to fill Kenneth Walker III’s very large shoes, at least he didn’t take the snap that led to one of the most ill-conceived trick plays in NFL history this past Sunday, as Walker did.

“I think the key is gonna be in the passing game with [Payton] Thorne being aggressive,” said Morrissey. “They have the weapons on the outside and I think Thorne is a pretty good quarterback. Hopefully they can throw it on earlier downs just to set up the run rather than run, run, pass.”

Michigan’s starting quarterback last season, Cade McNamara, limped off the field against UConn and will now miss an indeterminate amount of time. And while McNamara’s injury is far less serious than the broken ankle suffered by San Francisco 49ers starter Trey Lance, there’s a parallel to be drawn in that both quarterback conundrums were solved, somewhat tragically, without Jim Harbaugh or his former team’s coaching staff having to actually make a decision.

For what it’s worth, Morrissey is convinced Harbaugh would have landed on McCarthy as his starter even if McNamara had stayed healthy.

“To me, McCarthy’s just way better and more mobile and a better option,” he said. “Harbaugh played that game for about a year-and-a-half now, so I think it’s finally time to give McCarthy the reins.”

WynnBET has installed Michigan as a 16.5-point favorite over 3-0 Maryland at the Big House in Ann Arbor this Saturday, with 65 the consensus over/under. PointsBet is a slight outlier in this regard, setting the total at 65.5 with reduced -105 juice on the under. The best moneyline value available to Wolverine backers is -750 at WynnBET.

While Maryland is clearly not expected to win its Big Ten opener, one thing the Terrapins have going for them is, unlike Michigan’s previous three opponents, they figure to be a legitimately competitive Division I football team.

“Maryland’s been pretty good so far,” said Morrissey. “They’re gonna have to score with [Michigan], for sure, which they’re definitely capable of. And how much do we really know about Michigan, playing the nobodies?”