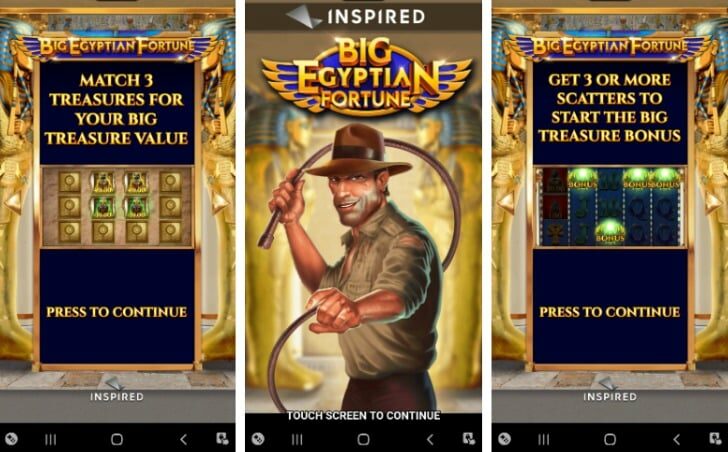 And when you open up Big Egyptian Fortune, a Michigan casino game created by Inspired and exclusive to BetMGM, you’re immediately faced with Harrison Ford as Indiana Jones.

Actually, the hero of this slot adventure isn’t named, and our lawyers are whispering in my ear I can’t call him “Harrison Ford as Indiana Jones,” so let’s go with …

Jerry Chrysler as Arizona Smith. Kind of has the same ring, dontcha think?

Anyway, ol’ Arizona Smith* is the hero of this game (*again, not actually his name), and it’s a rip-roaring adventure through ancient Egypt, where the goal is to … you know, get three or more items lined up in a row to win a prize.

It’s a slot machine. What do you want from me? And it’s called Big Egyptian Fortune, which translates to “95% RTP, and not that variable, so you get a bunch of little wins to keep you going while you wait … and wait … and wait for the bonus round.”

Crack that whip, eat some monkey brains, and away we go.

All in all, this is a very straightforward slot for most of the time you play it. It’s 5×3, with 10 paylines, and the goal, as always, is to get three, four, or five of the same symbols in a row.

The best symbol to get is the ankh, then the necklace, then something with an eye in the middle of it, then a bracelet, then your standard 10-A playing cards. (Fun fact: Playing cards were invented in China, but came to Europe via Egypt. The more you know!)

And that’s pretty much that, unless you get three or more bonus symbols, and then you — one guess — get to play the bonus round.

And as far as bonus rounds go, this one is different from most. It’s actually a little confusing, but I’ll do my best.

The first thing after you hit the bonus is to choose your “Big Treasure.” You have 15 treasure chests, and you pick until you get three of the same ones. Once you get three, it reveals what your bonus is — the minimum is 20x your original bet, the maximum (though not really the maximum, please stand by) is 100x your bet.

Then you get unlimited spins until you get to whatever your multiplier is, though if you’re lucky, you can blow right through that number. How? Well, you’re hoping to start collecting these vase-looking things with cats on them. They have a prize attached, and they lock on the reels. (Not the red ones, though. They don’t lock.) And once you collect a few of those, you’re hoping ol’ Indiana Jon — er, Arizona Smith — comes a-calling with his whip, because when he does, he whips all those cat vases and you get all the money listed on them. You can really win big here.

You also have King Tut-looking things on either side of the reels, and there’s some hieroglyphics and other assorted Egyptian stuff going on.

Also, if you get two bonus symbols, the music and the reels slow down as the excitement builds in hopes of landing a third bonus symbol. You really feel like Arizona Smith at that point.

I more or less broke even on my 100 spins. I got five ankh symbols in a row, which really helped. Also notable: I got two bonus symbols on a spin 12 times. I felt like I was really close to hitting it. So I spun a few more times on a play-money version of the game. I spun over 700 times (not kidding, just tap-tap-tapping on the touch pad on my computer at a rate of a little more than once a second). And I finally landed on a bonus.