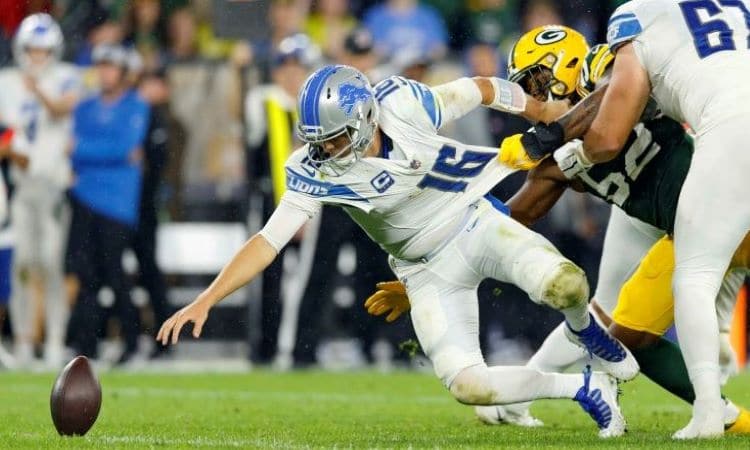 A sports bettor who needed the Detroit Lions to defeat the Green Bay Packers on Monday Night Football to hit a mammoth 16-team parlay wound up cashing out the bet after all.

After nailing the first 15 legs of the massive parlay, the Michigan bettor stood to collect $726,959 on the $25 risk-free bet had the Lions prevailed on Monday night at Lambeau Field. As a token of goodwill, BetMGM Sportsbook decided to reward the bettor with a pre-tax payout of $133,000. BetMGM publicized the parlay on Monday after the Ravens rallied to defeat the Chiefs 36-35 on Sunday Night Football.

The 16-team moneyline parlay carried a payout of around 29,078-to-1. Typically, a 15-team parlay can pay upward of 15,000-to-1 on parlays comprised of spread bets. The bettor, however, settled for a payout of 5,320-to-1. It is unclear if the bettor negotiated a settlement with BetMGM during the game on Monday night or was compensated in the aftermath of the Lions’ defeat.

“With a free bet, bettors don’t have the option to cash out. Given how incredible his 15 picks were, our trading team made an exception and worked with the bettor to offer a payout of $133,000,” a BetMGM spokesperson told MI Bets.

The bettor selected 10 favorites on his ticket, beginning with the Washington Football Team (-175) to defeat the Giants on Thursday Night Football. The Giants appeared to win the game when a 48-yard field goal from Washington kicker Dustin Hopkins sailed wide right with no time left. Luckily for the bettor, he did not discard the ticket. Giants defensive lineman Dexter Lawrence jumped offsides, then Hopkins connected from 43 yards for a 30-29 win.

The customer then capitalized on a bit of good luck Sunday evening when Vikings kicker Greg Joseph also missed to the right on a 37-yard field goal that would have given Minnesota a victory over the Cardinals. The bettor went with underdogs on the final four legs of the parlay: Cowboys +135, Titans +190, Ravens +180, and Lions +400. Facing a hostile crowd in Seattle, the Titans overcame a 24-9 second-half deficit to defeat the Seahawks 33-30 in overtime. Baltimore also rallied from a double-digit deficit to edge the defending AFC champion Chiefs by one in a thrilling finish.

On Monday night, the Lions improbably jumped out to an early lead and went to the locker room up 17-14 after Austin Seifert hit a 43-yard field goal with three seconds left in the first half. With the Lions up three, the bettor was only two quarters away from cashing a six-figure ticket.

The wager generated a vigorous debate on Twitter, as sharp and recreational bettors alike urged the customer to hedge his bet. A simple $300,000 moneyline wager on the Packers (-600) would have returned a payout of $50,000. If the Lions pulled off the upset, the hedge would have dampened the customer’s return on investment, but he still would have taken home a pre-tax amount in excess of $420,000.

Alternatively, the customer could have used the $25 risk-free bet on a 15-team parlay, ending with Sunday night’s contest. After collecting his winnings, he could have rolled over a portion of the payout on the Lions at +400 and still emerged as a winner regardless of the outcome. The Lions didn’t score again in the 35-17 defeat.

Or if he had just done 13 bets and not counted SNF. He literally took a free $25 bet and then threw every game on the slate without thinking about it. Not a high stakes situation 99.9999% of the time.

While parlays with steep odds rarely hit, there is some precedent for customers taking home astronomical payouts. In 2015, a bettor at William Hill in Las Vegas won $100,810 when he hit a 15-team Major League Baseball parlay. It marked the first time in MLB history that all 15 home teams captured wins on the same day. More recently, a customer turned a $10, 14-team parlay at WynnBet Sportsbook into $79,935.70 on Labor Day when the total in an Ole Miss-Louisville college football matchup stayed under 75.5.

Others have been less fortunate. In 1998, a homeless man in Las Vegas appeared on the verge of hitting a $10, 10-team parlay that would have paid around $8,000. The customer needed the Bills +3.5 over the Patriots on the final leg of the ticket, placed at the now-shuttered Stardust Hotel. Leading 21-17 in the waning seconds, the Bills appeared to win the game when a Hail Mary from Drew Bledsoe hit the ground. The Patriots, though, received a reprieve with a pass interference call, then took a 23-21 lead on a Ben Coates touchdown catch.

Crushed by the outcome, the Bills refused to line up for the extra point in protest of several questionable officiating calls. The game ended on a 2-point conversion by Patriots kicker Adam Vinatieri, who strolled into the end zone for the 25-21 win. The Patriots somehow covered the 3.5-point spread.

The tale is widely known as “The Saddest Betting Story Ever Told.”

“I wanted a better life,” the bettor told Pro Football Weekly in 2017. “I always think about what I would have done with that money to help myself.”

Bettors everywhere have grown accustomed to the maxim Any Given Sunday to deal with the most stinging bad beats. The bettor from Michigan may have added the phrase Any Given Monday to his lexicon before receiving the fortuitous cash-out.

Looking to make your first sports bet or parlay? Why not use our exclusive Michigan BetMGM promo code.