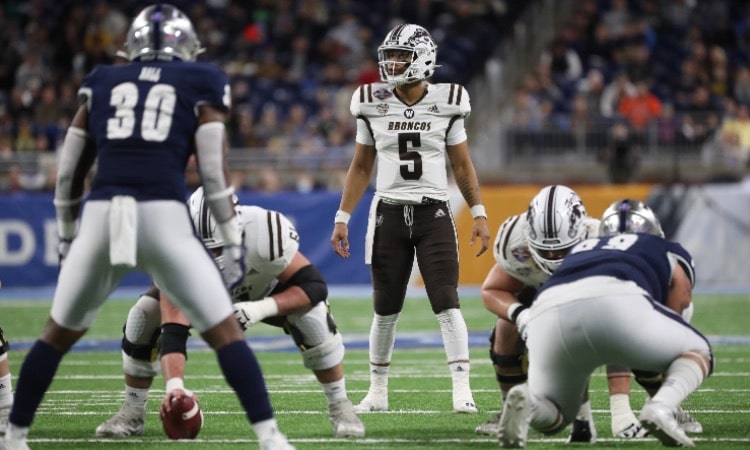 It’s considered an honor and a privilege to receive an invitation to the NFL combine. Western Michigan’s Kaleb Eleby was one of only 15 quarterbacks to participate in the 2022 showcase.

No QBs from Michigan and Michigan State, or anywhere in the entire Big Ten Conference, in fact, were among the select crowd of gunslingers asked to display their arm talent before NFL coaches and scouts on hand at Lucas Oil Stadium in Indianapolis to evaluate the NFL Draft prospects.

Eleby, who completed his redshirt sophomore year before electing to forego the rest of his college eligibility to enter the 2022 draft class, was also the only Mid-American Conference QB on site.

Entering the combine, Eleby wasn’t typically mentioned alongside highly touted signal-callers like Pittsburgh’s Kenny Pickett, North Carolina’s Sam Howell, and Cincinnati’s Desmond Ridder. Listed at 6-foot-1, 208 pounds, Eleby wasn’t recognized as an early-round NFL Draft prospect prior to the combine. Post-combine … the Broncos quarterback, who passed for 3,277 yards last season, is still not projected as a signal-caller deserving of an early draft selection.

Eleby probably didn’t help his draft prospects any with his athletic performance in Indianapolis. He participated in only three of the five physical examination drills in which QBs took part. He didn’t fare well, posting the worst results in two events and the next-to-worst result in the other.

Athleticism put to the test

The Broncos QB was timed at 7.57 seconds for the 3-cone drill, which was the slowest among the seven QBs who took part in the speed drill. Brown University QB E.J. Perry topped the field with a time of 6.85 seconds.

Eleby recorded an effort of 9 feet, 3 inches in the broad jump, which ranked seventh among the eight QBs taking part. Only Western Kentucky’s Bailey Zappe (9 feet, 1 inch) posted a worse jump, while Ridder topped the field with an effort of 10 feet, 7 inches.

Eleby opted out of the 40-yard dash and 20-yard shuttle. He did throw during the passing drills portion of the workouts that were televised on the NFL Network.

In his last time in a Broncos uniform, Eleby led Western Michigan to a 52-24 rout of Nevada in the Quick Lane Bowl. The Broncos QB completed 8 of 14 passes for 162 yards, including two touchdowns, and also ran for another score.

For the year, he passed for 3,277 yards and 23 touchdowns, while only tossing six interceptions. He rushed for 64 yards on the season, including six scores.