The Week In MI Lotto: New Promotions, Nine-Figure Jackpots, And A Road Trip To Cash City

The Michigan online lottery has introduced a new instant win game, Road Trip USA, whereby players can win up to $125,000 at the click of a mouse. Or, they could purchase a Powerball or Mega Million ticket this week for a shot at a nine-figure jackpot. 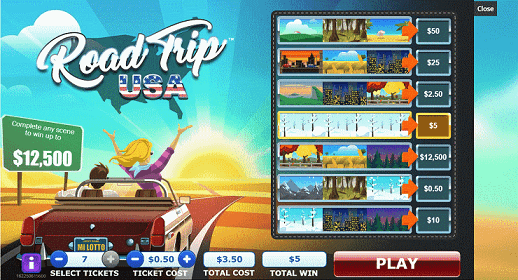 Michigan’s online lottery continues to satisfy players, with new games and promotions being added and updated all the time. New and old iLottery fans in the Wolverine State can enjoy a number of recent incremental improvements and try to cash in on big potential jackpots.

The new Road Trip USA instant win game continues to attract fans. This recent addition to Michigan’s online lottery website offers up to seven plays at once, at ticket values from $0.10 to $5 for a maximum value of $35.

On each purchased subticket there are three small panels to be revealed, as well as a variable prize value determined at random. If the three hidden images match and form one panoramic vignette you win the associated prize. For players at the highest wager level there is a maximum reward of $125,000.

There are 12 possible outdoor scene images that can be revealed, with stated odds indicating each ticket has about a 8% chance to win. The game has an expected return percentage of 90%.

The multiple ticket option means you will generate a win fairly often, usually averaging a win for every other full 7-ticket pull (though not evenly distributed, as you can win multiple times on each ticket).

In any case, though the game was designed without too many appeal features the Michigan player base seems to be responding positively to its simple gameplay.

The Michigan Lottery is also planning a number of other new retail instant scratch-off games, such as a new Win for Life game, a $20 Money Money Money ticket that can yield a $2,000,000 win and the Platinum 7’s ticket ($5, biggest prize $500,000) which will fit nicely along with other recent 7-themed games.

From May 30th to September 18th the online Michigan lottery’s Welcome Bonus currently offers a 50% purchase match on a new player’s first purchase (up to $100 in bonus credit.)

For retail draw game purchases, in the month of June there is a promotion called “Double Days”. This offer potentially increases your winnings on Club Keno, Fantasy 5, or Lotto 47: random tickets will print marked with the word “DOUBLER”, indicating that any winnings on that ticket are doubled (up to $4,000,000). Though of course the ticket already needs to be a winner for the multiplying of its value to have any effect.

And, as always, the iLottery is still running the Daily Spin to Win. This ongoing offer which gives away $5,000 in cash every month is expected to run at least until the beginning of October, giving every online gambler in Michigan a chance to win in-store free play coupons, online bonus credit, or entries to their prize sweepstakes.

At the time of this writing there is still an outstanding $1,000,000 prize from a Powerball drawing back in September of last year. The ticket was purchased in Ionia, Michigan, and the lucky winner has until September 25th to claim the award in Lansing.

In the last week Michigan’s Fantasy 5 game has paid out multiple winners. A woman in Macomb County enjoyed a win of $247,000, while a few days later a man from the same county won $105,000. In the midst of these a man from Oakland County finally claimed a $370,000 prize he won on a Fantasy 5 back in December.

The week before, a winning Lotto 47 ticket worth $2,500,000 was purchased in Kalamazoo. Also in Kalamazoo a man won $300,000 on a single scratch-off, the Wild Time Instant Game designed to celebrate the lottery’s 25th anniversary.

Sadly, one family did not win a $1,250,000 jackpot that they believed was coming to them after checking a ticket on an unreliable third-party website. This unfortunate tale is a reminder to trust only the official state website MichiganLottery.com.

In multi-state lottery jackpots there are multiple chances for a lucky player to win a nine-figure prize: the next Powerball drawing will be on Saturday, June 9th for $105,000,000, and the next Mega Millions will be drawn on Friday, June 8th for a jackpot of $127,000,000.