Greene delivering at the plate for Tigers while making a case to be considered for top rooking award. Skip to content 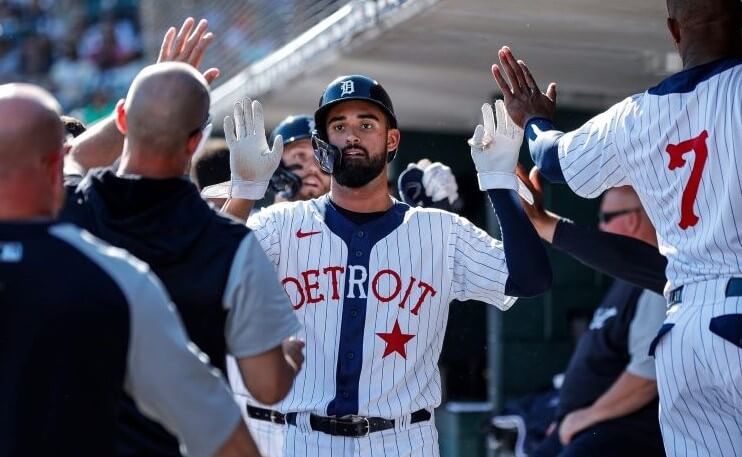 Riley Greene’s brief time in a Detroit Tigers uniform this summer is providing a midseason lift for a team that owns the third-worst record in the American League.

The 21-year-old outfielder’s latest feat drawing attention came Tuesday night when he recorded a pair of doubles and drove in three runs to help the Tigers defeat the Cleveland Guardians 11-4, completing a three-game sweep. With such production, Greene is making a case to stay put in the Tigers lineup and put his name in the race for AL Rookie of the Year.

At the same time, the online sportsbooks view the award as a bit of a runaway midway through the season. DraftKings has odds of -250 on Seattle’s Julio Rodriguez winning the ROY award, while FanDuel has odds on him of -280 and BetRivers has odds of -286.

Prior to the start of the season, BetRivers had odds of +2200 on Greene, who suffered a fractured right foot near the end of spring training. The injury probably cost him a chance to be on the Tigers’ Opening Day roster. He spent much of the first half of the season rehabbing and playing in Toledo, where he batted .279, recording 19 hits, and eight RBI.

Riley Greene has given Detroit Tigers an unmistakable spark; 'it's a lot of fun when we win' https://t.co/GvcstghNXz

The latest victory for the Tigers (33-47) was the third straight over the Guardians (40-39). The Tigers improved to 6-2 against Cleveland this season and had entered the year not winning a series with Cleveland since the 2015 campaign.

During the sweep, Greene recorded three hits and five RBIs and scored two runs. Since being called up from Toledo in mid-June, Greene is batting .274 with 17 hits, eight RBIs, and 12 runs scored in 62 at-bats.

Detroit, currently in fourth place in the AL Central Division, is far from being a contender in arguably the worst division in all of Major League Baseball. Yet winning a third straight game over Cleveland offered reason to be positive moving forward. The Tigers are 6-4 over their last 10 games, matching Minnesota for best record within the division in that most recent stretch.

And there’s no denying that Greene, batting leadoff, has been a big part of the Tigers’ recent success.