Sportsbooks Sour On Tigers, Who Just Might Be Primed To Surprise 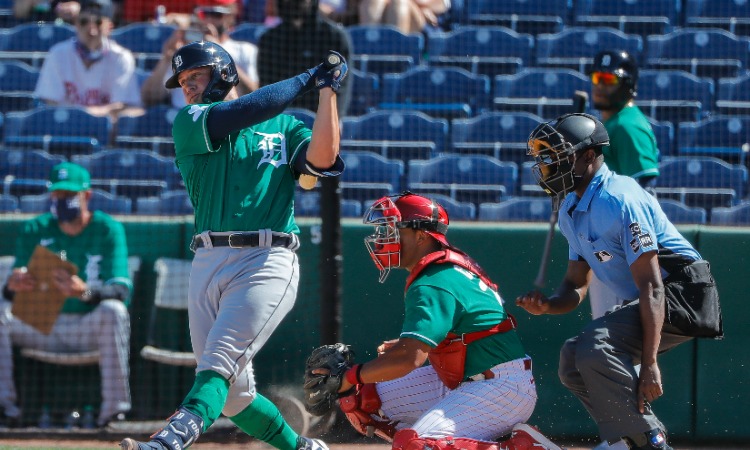 Every year, there’s a few teams that surprise. And some years, there’s a baseball team that really surprises.

Is it possible this year’s surprise is lurking right here in Detroit?

Is it possible the Tigers — who have suffered through five straight losing seasons — are on the verge of a breakout?

The rebuild, as it were, seems close to being over. The Tigers had a busy off-season, signing Barnhart, Javier Baez, Michael Pineda, and Eduardo Rodriguez. TheRinger.com ranked the Tigers’ winter transactions as the fifth best in all of baseball. On top of those additions, it increasingly looks like top prospects Spencer Torkelson and Riley Greene — the fifth- and sixth-ranked prospects in all of baseball, according to Fangraphs — will not only make the team, but be in the opening day lineup.

Spencer Torkelson follows up Greene's Homer with a double.
The wind kept it in the fences. #TigersST pic.twitter.com/KDF9kqEAjO

While not quite the 1927 Yankees Murderers’ Row, it also appears pretty darn good. If Greene and Torkelson are the real deal … this lineup has the potential to do plenty of damage.

And the pitching — led by Rodriquez — looks halfway decent, at worst, with Tyler Skubal, Casey Mize, and Matt Manning as a young core of talent. So of course the sportsbooks are all over the Tigers, right?

Since the last time MI Bets checked nearly a month ago, some of the odds associated with the Tigers have in fact gotten worse — meaning, better for the bettor.

For instance: If you think the Tigers can manage to wrest the AL Central from the Chicago White Sox, DraftKings will pay out at +750 odds, up from +700 earlier in the month. The Chisox are -195 favorites.

And the odds to make the expanded 12-team playoffs? Try a not-terrible +375 at BetRivers.

Do you believe the #Tigers will compete for a playoff spot? #DetroitRoots pic.twitter.com/PlnLbwMWMc

On the player front, Torkelson is +500 at BetMGM — second favorite behind Bobby Witt Jr. of the Kansas City Royals at +300 — to win the American League Rookie of the Year. Greene is +2000 at Caesars to win the same award, a tick’s improvement from +2200 earlier in the month.

Going even further, Rodriguez is +5000 at Caesars to win the Cy Young Award (Skubal is +7500). This one is actually pretty interesting, as Rodriguez is coming into his age-28 year and the lefty is no longer pitching at Fenway. Notably, Rodriguez was also unlucky last year, with a 3.32 FIP compared to his 4.74 ERA.

Lastly, Baez — who is capable of putting up MVP-type numbers — is +10000 at FanDuel to win that award,