Tigers Look To The Future With Spencer Torkelson And Riley Greene 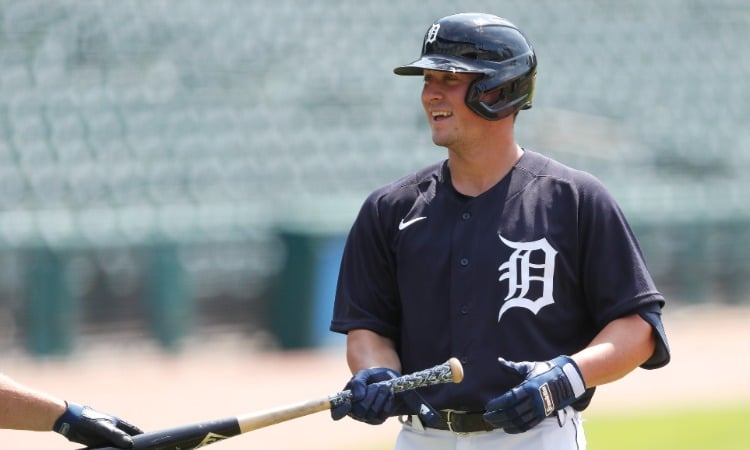 If the baseball season ever happens — it’s going to happen, right?!?! — the Tigers might have one of the more exciting young teams in the game. After all, it’s not every day a franchise can boast two of the game’s top prospects, but that’s exactly what the Tigers are sporting in first baseman Spencer Torkelson and outfielder Riley Greene.

Well, we had to do it now. A Spencer Torkelson home run montage with the Proclaimers “I’m Going Be (500 miles) as the background music over home runs in 2021. @ThatDanHasty’s home run call kicks it off. pic.twitter.com/pvujBuB8H7

Granted, neither Torkelson nor Greene is expected to be in the starting lineup coming out of spring training. But they’re both expected to be called up to the big club — and given every opportunity to start — in short order. (And who knows — if they have torrid springs … )

The sportsbooks are taking note, as Torkelson is the second-favorite to take home the Rookie of the Year iron, with odds as high as +525 at BetRivers. Greene isn’t that far behind, at +2200, also at BetRivers. Bobby Witt Jr. of the Kansas City Royals is the current favorite, at +300 on DraftKings, though he is also not expected to break the starting lineup out of camp. There may be a ton of movement in this market as the season draws closer.

That projection is not exactly spreading Tigers fever across the Detroit area, but here’s something worth noting: ZiPS has the Chicago White Sox leading the AL Central pack with an 88-74 tally, but after that, the Tigers are mashed in with the Cleveland Guardians (78-84), Minnesota Twins (75-87), and the Royals (74-88).

Yes, the Sox are the consensus -200 favorite to win the Central crown, but the Tigers are the second favorite, with the most attractive odds at FanDuel and DraftKings at +700.

And if one is really feeling frisky, both of the above-mentioned sportsbooks are offering +2200 odds on the Tigers taking the AL pennant, and PointsBet has the Tigers as 40-to-1 longshots to take home the World Series championship.

Of course, for any of the above to happen, the team would need to overperform with outsized contributions from some of its players.

With that in mind … newly signed shortstop Javier Baez is at +6500 on DraftKings to win MVP, and third baseman and projected cleanup hitter Jeimer Candelario has MVP odds of +7000 on PointsBet.

Perhaps somewhat surprisingly, the Tigers’ Cy Young chances are a little bit better, with freshly signed Eduardo Rodriguez coming in at +3500 and Tyler Skubal at +4000, both at PointsBet.

And here’s one more longshot: leadoff hitter Akil Baddoo leading the league in stolen bases, with odds as high as +2500 on PointsBet.

Bottom line: As the Tigers prepare to kick off their spring, it’s clear this is a team on the rise. Have they put the pieces together to contend this year? A lot will depend on how quickly Torkelson and Greene get the call — and if they succeed from the jump.