The sons don’t shine for Izzo and Howard, but they should dance nonetheless 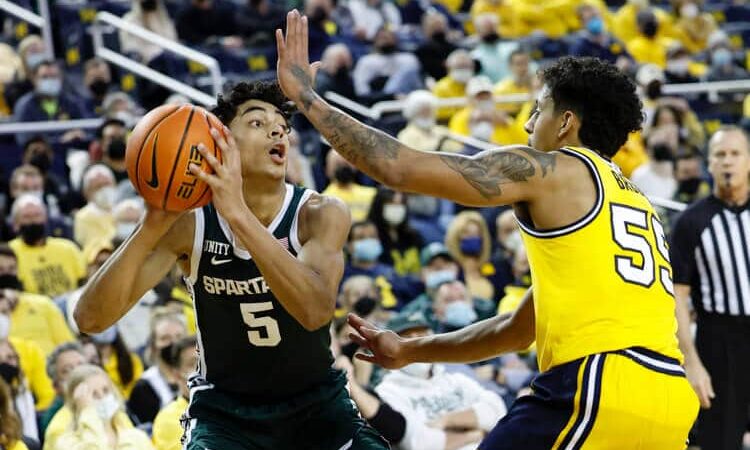 Steven Mateen Izzo is the son of one Tom Izzo, the legendary head coach of the Michigan State University Spartans. Steven — whose nickname is Steve-O, but should be Little Steven — stands 5-foot-8 and averaged 1.5 points per game as a senior at Lansing Catholic High School.

According to his bio on Michigan State’s website, Little Steven earned his first trophy for “writing a poem about the World’s Greatest Dad.” Now a junior who’s scored exactly zero points (save for a free throw in an exhibition game against Division III Albion) in his three-year career as a benchwarmer with the Spartans, this much is clear: When it comes to earning a walk-on spot in East Lansing, writing a flattering poem about one’s father is more important to Tom Izzo than a prospect’s high school performance, although it certainly helps to be Tom Izzo’s son.

Over at the University of Michigan, head coach Juwan Howard’s son plays for him as well. Also a junior, 6-foot-8 Jace Howard actually enjoyed a respectable high school career and has put a few balls in the basket in real games for his pop, who starred in Ann Arbor before enjoying a long and successful stint in the pros. There’s no mention of an awesome dad essay on his official bio, although that’s not to say he never wrote one.

Neither of these coaches’ sons are likely to see much, if any, action in the Big Ten Tournament, which tips off Thursday for both Michigan schools, but their respective resumes are apt metaphors for their programs at large. Despite enjoying considerable success on the national stage and zero turnover in the coach’s office, Izzo’s Spartans tend to attract the local lunch-pail kids, while Michigan’s recruits are more regal and worldly.

The Spartans entered the season unranked, but they clawed their way to 10th in the AP poll after starting out 14-2, with the only two losses coming against national powerhouses Kansas and Baylor. But the clock eventually struck midnight, as the Spartans closed the regular season on a 3-7 skid to finish 20-11 and out of the Top 25.

Michigan, meanwhile, was ranked 6th in the AP’s preseason poll, a clear indication that the Wolverines were expected to compete for a national title. But after getting destroyed by Arizona and North Carolina early in the year, it became clear that they weren’t quite ready for prime time. And despite a late-season surge which saw them beat Iowa, Illinois, Ohio State, and the Spartans (the Michigan schools split their season series), they wound up with an extremely pedestrian 17-13 record.

“I don’t know if they could answer the bell on how big the expectations were in Ann Arbor,” said WynnBET Senior Trader Motoi Pearson. “They couldn’t get where they wanted to be in these big games early in the season.”

The Spartans and Wolverines finished with identical 11-9 records in the Big Ten, good for the seventh and eighth seeds in the conference tourney in Indianapolis, where, on Thursday, Michigan State will open against Maryland — which it defeated in the final game of the regular season — and Michigan will take on Indiana. As of Wednesday afternoon, WynnBET and FanDuel were in lockstep on the spreads in each game, with the Spartans favored by 3 and the Wolverines favored by 2 (both games at -110 both ways at both sportsbooks).

Similarly, both WynnBET and FanDuel set the over/under for the MSU-Maryland game at 139.5, while the Wolverines-Hoosiers tilt is a tad lower at 136.5 at both books. On the moneyline, FanDuel had Michigan at -134 and Indiana at +112 to win outright, while the Spartans were at -150 and the Terrapins +125. For its part, WynnBET set Michigan’s outright winner odds at -155 and Indiana’s at +127, while the Michigan State-Maryland moneyline mirrored FanDuel’s.

Wolverines on the bubble?

Should the Wolverines, who are paced by 7-foot-1 sophomore center Hunter Dickinson’s 18.4 points and 8.5 rebounds per game, advance, they’re expected to be a lock for the NCAA Tournament irrespective of how they fare in Friday’s quarterfinals against top-seeded Illinois. But while some prognosticators view the Michigan-Indiana matchup as a de facto play-in game, Pearson thinks at least one of those two teams has already punched its ticket.

“I think Michigan’s probably more set to get in somehow,” said the WynnBET trader. “Indiana probably needs to win more. Michigan had some big wins down the stretch, so I think they’ve cleaned up their résumé.”

The Spartans, who are paced in assists (A.J. Hoggard) and rebounds (Marcus Bingham Jr.) by two players who average fewer than 20 minutes per game, feature a nine-man rotation with only one player (senior forward Gabe Brown) averaging in double figures. They’re widely considered to be a lock to go dancing, even if they lose to Maryland on Thursday. (The winner of that matchup will face second-seeded Wisconsin on Friday.)

“I think Michigan now is like a 10 seed and Michigan State is like an 8,” said Pearson. “A couple wins in the Big Ten tournament would be a big deal for both those teams.”

Concerning MSU’s late-season slump, Pearson observed, “The Big Ten has been such a gauntlet. The top of the Big Ten, these guys are all legitimate teams. Over the course of a month or a couple months, if you’re losing some of those, it’s totally understandable.”

Identifying the conferences he thinks are the two best in the country, Pearson added, “I think the SEC has been far and above the best as far as teams that are gonna compete for a title, but the Big Ten is right in there. They can all make some type of run.”

But just how likely is it that one of the Michigan schools runs all the way to New Orleans?

FanDuel gives the Wolverines 21/1 odds to win the Big Ten tournament and 30/1 odds to make the Final Four, while the sportsbook has the Spartans at 19/1 to win the conference tourney and 50/1 to advance to the national semifinals.

Specific to the Big Ten tourney, WynnBET sees things a bit differently, giving Michigan 12/1 odds to earn the automatic bid ahead of Michigan State at 20/1. To this end, Pearson said he’d be far more surprised to see the Spartans make a deep run in March.

“It seems like Michigan’s picking up where they should have been,” he observed. “It wouldn’t be too surprising that they would make a run. Michigan State, if they can make a run in the Big Ten tourney and turn it on when they need to, that would be, to me, pretty insane, even with Izzo coaching.”