Following a dreadful 2020 season, expectations are low again for the Wings as the storied franchise continues a lengthy rebuilding project. 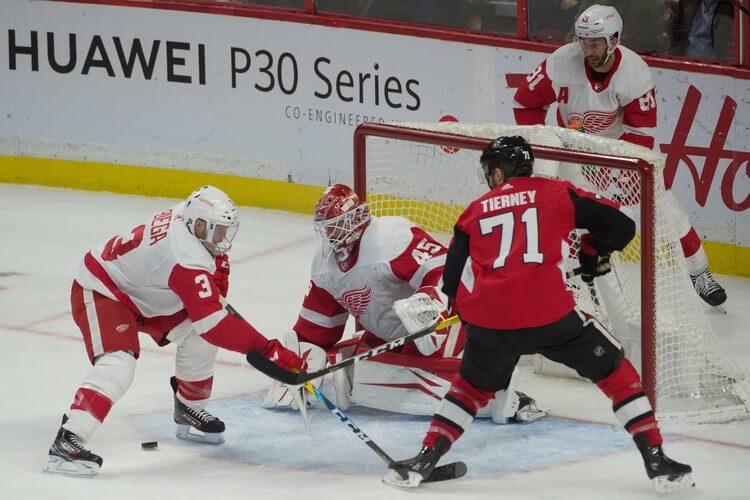 Since the Detroit Red Wings’ remarkable streak of 25 consecutive seasons with a playoff appearance came to an end in 2017, the storied franchise has fallen on hard times.

Eliminated from playoff contention in February, the Red Wings ended the 2019-20 season with a 17-49-5 mark, producing the lowest winning percentage of an NHL franchise since the Atlanta Thrashers in 1999-2000. Over the last four seasons, the Red Wings have won just 112 contests, a far cry from a stretch between 2005-08 when the franchise recorded 213 regular-season victories, made three Western Conference finals, and captured the Stanley Cup in 2008.

As a result, expectations among sports bettors are low for the Red Wings heading into the season. At DraftKings, a prop on the Wings to miss the playoffs has odds of -5000, meaning that a bettor must lay $50 to win a dollar. Detroit also has odds of 350/1 to win the cup, last among 31 teams in the NHL. The odds on the Red Wings to win the Stanley Cup range from 200/1 to 350/1 at top sportsbooks nationwide.

Oddsmakers will be shocked if the Wings even make it to the postseason. Detroit has double-digit odds of 10/1 at BetMGM to qualify for the playoffs. Bettors will receive a higher payout at DraftKings, where the odds are +1150.

Due to the COVID-19 pandemic, the NHL has reduced the regular season to 56 games per team. As with the futures market, the Red Wings are also among the league’s worst when it comes to season point totals. At DraftKings, Detroit’s point total for the season is 42.5 (over -112/under -112). The view is less dim at PointsBet, where the Wings’ season point total is 44.5 (over -115/under -115). You could also earn a larger Return On Investment (ROI) at BetMGM, where the juice is -110 on a season point total prop of 43.5.

The Red Wings took steps to shore up their goaltending in the offseason. Last season, the Red Wings gave up a league-high 265 goals, 27 more than the next closest team. Former Red Wings goalie Jimmy Howard allowed 4.20 goals per game in 2020 on an 88.2% save percentage. Detroit replaced Howard, their longtime netminder, through the acquisition of former Islanders goalie Thomas Greiss. The Red Wings plan to split goaltending duties between Jonathan Bernier and Greiss, coach Jeff Blashill said. In nine NHL seasons, Greiss has allowed 2.63 goals per game.

Detroit added some offense in the offseason by signing forwards Vladislav Namestnikov and Bobby Ryan. Namestnikov, a six-year veteran, has impressed Blashill with his versatility in training camp. While Ryan is a four-time 30-goal scorer, his production has waned in recent years with only 44 goals over the last four seasons.

For 2021, the Red Wings will compete in the eight-team Central Division along with Tampa Bay, Carolina, Dallas, Nashville, Columbus, Florida, and Chicago. The division is arguably the most competitive in the league. With considerable travel issues facing U.S. teams crossing the Canadian border, the NHL was forced to create a division featuring Canada-only franchises in 2021.

The realignment plan could impact the Red Wings’ point total during the upcoming season. Typically, Detroit competes in the Atlantic Division that contains other perennial cellar-dwellers such as the Ottawa Senators, Buffalo Sabres, and Montreal Canadiens. The Red Wings’ projected season point total is 51.4, according to Vegas Stats & Information Network (VSiN) hockey expert Andy MacNeil.

In Thursday’s opener against the Carolina Hurricanes, the Red Wings are +170 underdogs on the moneyline. Detroit could be without forward Darren Helm and defenseman Christian Djoos. Both players were placed on the NHL’s unable to play or practice list on Jan. 13, in accordance with the league’s COVID-19 protocols.