Despite the addition of a goaltender via trade, oddsmakers aren't high on Detroit in 2022-23 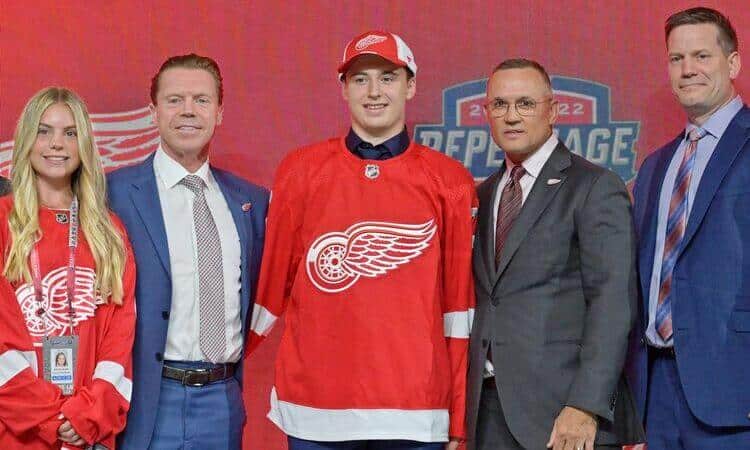 The 2022 NHL Draft wrapped up last week, and the Detroit Red Wings added a few prospects who should excite fans. At the top of the list is Marco Kasper, an 18-year-old center with above-average skill, good size, and a great competitive spirit.

“Marco Kasper became a favorite of mine — and a favorite of many NHL scouts — as the season progressed,” Corey Pronman, an NHL analyst with The Athletic, wrote in a draft recap. “He’s a well-rounded forward who did so well versus pros this season. He may not be elite at anything, but he has the looks of a two-way top-six NHL center, which is exactly what the Wings needed.”

A few clips of Kasper from the previous season: pic.twitter.com/kUbqONWPPA

Other top draft picks included Dylan James, a wing and the 2021-22 USHL Rookie of the Year, and Dmitri Buchelnikov, who is considered by Pronman to be a riskier pick at wing but has scoring potential thanks to high-level skills.

“I think this draft will largely come down to how good Kasper is, and I think he will help the Wings a lot,” Pronman wrote.

While not a draft selection, the Red Wings gave up a third-round pick to trade for goaltender Ville Husso. The 27-year-old showed promise across two NHL seasons with the St. Louis Blues, although he’ll seek increased consistency in Detroit. The Red Wings signed Husso, who posted a 25-7-6 record last season, to a three-year contract.

Husso will pair with goaltender Alex Nedeljkovic, who played in 59 games for the Red Wings a season ago. The duo gives Detroit two goaltenders under the age of 30 with decent upside as 2021 draft pick Sebastian Cossa continues preparing for his NHL future.

Alex Nedeljkovic and Ville Husso would give the @DetroitRedWings one of the best goalie tandems in the East.

“Ideally, you have a great starter and a great backup,” Red Wings General Manager Steve Yzerman told the media. “How the games get divided up I’m sure performance will dictate that a bit, but they’re both going to play. The league has kind of shown you need your backup to win games, whether you’re playing back-to-backs, or four in six nights on the road.”

Detroit needs significant improvement defensively in 2022-23, as the Red Wings allowed 3.78 goals per game last season, the second-worst mark in the NHL. Husso may help the cause in the short term.

In the late 1990s and early 2000s, the Detroit Red Wings were among the best teams in the NHL. That hasn’t been the case in recent years, as Detroit hasn’t made the playoffs since the 2015-16 season. The Red Wings haven’t advanced out of the first round of the postseason since 2012-13, and they haven’t won the Stanley Cup since 2007-08.

Detroit’s lack of sports success in recent years is well documented, as the Tigers, Lions, and Pistons haven’t been impressive either. The sports betting odds don’t paint a pretty picture for success in the immediate future, as the Lions (gasp!) might actually be the closest of the franchises to serious contention.

Defenseman Moritz Seider earned NHL Rookie of the Year honors last season for the Red Wings, adding to the franchise’s list of young stars. Dylan Larkin, a team captain, is another young standout worthy of attention. He’s played well since entering the NHL in 2015-16. Detroit also has a new head coach in Derek Lalonde, who joins the franchise after spending the last four years as an assistant coach with the highly successful Tampa Bay Lightning.

There are reasons for optimism for Red Wings fans, but the team is still multiple pieces away from returning to the top of the NHL. Detroit added prospects last week with future Stanley Cup contention in mind, but in the immediate future, a futures bet on the Red Wings is a longshot.