The Pokagon Band of Potawatomi became the second tribe to offer sports betting in Michigan, launching at its three Four Winds properties. 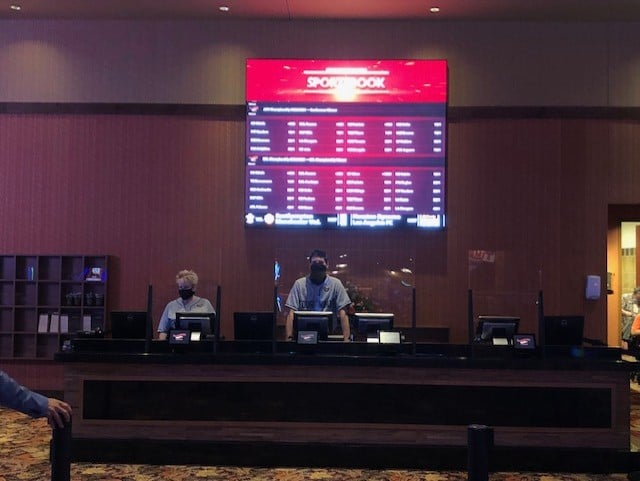 McMichael, a member of the 1985 Super Bowl-winning team and one of the linchpins of Chicago’s “46” defense, plunked down $20 on the Chicago Bears to win Super Bowl LV at 20-1 odds. He joked that placing the bet was a “double-edged sword” because if the Bears were in the Super Bowl, he’d be in attendance watching it.

“How excited am I? I’ve got goosebumps,” McMichael said. “Like that great writer said, ‘Cry havoc and let slip the dogs of war.’ (It’s) the same rush a guy gets putting a bet down like I did walking out the tunnel. It’s not about winning the bet, it’s about placing it. It’s about the juice.”

Four Winds, owner of three properties in the state and whose sportsbooks are operated by Kambi, joins FireKeeper’s Casino as the current tribal casinos offering sports betting in the Wolverine State. Michigan legalized sports betting in December, but the three commercial casinos in Detroit — which took legal sports wagers for less than a week before being shuttered due to COVID-19 — remain closed due to the pandemic.

“The Pokagon Band and its Four Winds Casinos continually strive to exceed expectations and enhance the entertainment experience of our guests,” Four Winds Chief Operating Officer Frank Freedman said. “We feel the Four Winds Sportsbook will add an additional level of excitement sports enthusiasts have been looking for.”

Tribal casinos do not operate under the authority of the Michigan Gaming Control Board, and various properties have opened across the state at different times since last month.

There is currently no mobile betting in Michigan, but the MGCB began taking supplier applications in May. Freedman said Pala will be working in tandem with Kambi to eventually offer both online sports betting and online casino wagering.

In the interim, bettors can use their smartphones to build their bets — scanning a QR code with their camera to gain access to the Four Winds Sportsbook. From there, bettors build their bets and are given a new QR code to place their wagers at any of the three Four Winds properties throughout Michigan.

“Sports betting and internet gaming, it’s been an on-and-off proposition for years at this point,” Freedman said. “In the past year and a half to two years, there are more and more states getting into the game. We’re pleased Michigan has made that decision to allow sports betting and pleased we’re at this point to take bets.”

Rather than have a dedicated sportsbook area with seating, Four Winds opted to locate its book in a centralized area on the gaming floor within easy walking distance of three dining and bar locations — the Hard Rock Cafe, C Bar, and Copper Rock Steakhouse. Four Winds has 18 self-serve kiosks in addition to four teller windows, while properties in Hartford and Dowagiac each have six self-serve kiosks and one teller.

Freedman also offered praise to bettors for sticking to social distancing guidelines, most notably wearing masks, as Four Winds continues to navigate operations amid the pandemic since reopening in mid-June.

“The public has been great, they really have been great,” he said. “As you see the floor, all of our employees are masked at all times, our guests are masked at all times. When they sit to eat, the masks are pulled down for dining or having a cocktail, what have you, but in the public areas and traversing the floor, our guests have participated with little to no pushback at all.

“I think the public gets it, they see what’s going on. With regards to who’s coming out and how they’re coming out, we’re really pleased. We’ve had great participation and more than anticipated, which is really good.”