Pistons Huge Underdogs Against Jazz Despite Winning January So Far 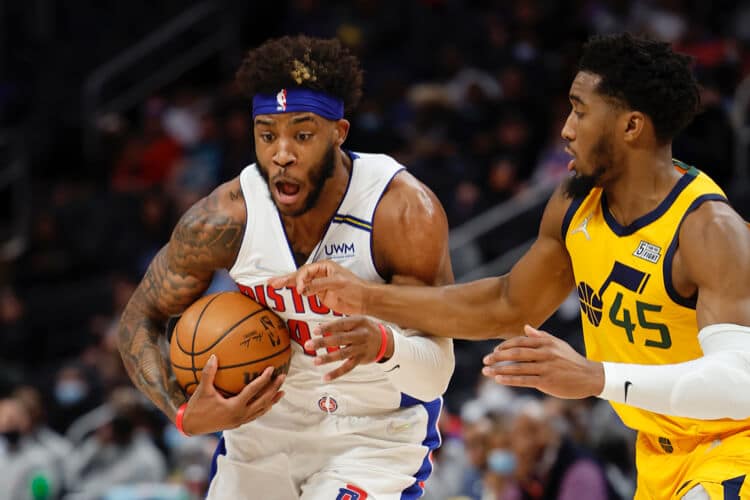 What a glorious time to be a pro sports fan in Detroit!

No, really: Motor City sports nuts have been beaten into such submission by the lingering lack of success from its professional franchises that a 3-13-1 Lions season was considered a step in the right direction. The floor just keeps getting lower and lower, to the point where down is up.

Take the Pistons, for instance. Their 11-33 record, the NBA’s second-worst, is objectively horrible. But after enduring a 1-11 December where their lone win snapped a 14-game losing streak, the Pistons are a balmy 6-5 in January thus far, a stretch that has seen them defeat the resurgent Raptors, a full-strength Bucks squad on the road, and Friday’s opponent, the Utah Jazz, at home.

Despite that loss and the potential absence of star shooting guard Donovan Mitchell (concussion protocols), the Jazz are 16-point favorites at WynnBET Sportsbook Michigan to topple the Pistons in Salt Lake City Friday. The sportsbook has set the over/under at 218 points, while sports bettors who are optimistic that the Pistons will keep winning on the road after prevailing in a Sacramento squeaker on Wednesday can take advantage of a fat +1000 price on the moneyline.

Through thick and thin, top draft pick Cade Cunningham has remained his steady self, averaging around 15 points, 5 assists, and 5 rebounds per game as a supersized point guard. While his Rookie of the Year odds (+550 at WynnBET, +750 at FanDuel Sportsbook Michigan) lag behind two players who were drafted behind him in Evan Mobley and Scottie Barnes, he’s in a wildly different situation than those peers, who play for squads in the thick of the Eastern Conference playoff race.

“I think the pro of being on a better team that has some more veterans, it makes that rookie year a little easier,” observed WynnBET Senior Trading Manager Alan Berg. “You don’t feel like the spotlight is entirely on you. And I think they get taught a little bit more by guys they respect — in Barnes’ case, a group of guys who’ve won a championship. But from a statistical aspect, Cade can kind of do whatever he wants. The freedom of that can maybe bring him to a Ja Morant level at some point.”

Cunningham poured in a career-high 29 points against the Jazz on Jan. 10, a scoring total equaled by second-year small forward Saddiq Bey. A first-round draft choice out of Villanova in 2020, Bey has been on fire over the past month, notching a career-high 34 points in that win over Milwaukee and also exceeding the 30-point mark in Wednesday’s win against the Kings and a Dec. 29 loss to the Knicks.

While his field-goal percentage is down a bit from his rookie campaign, Bey has improved in virtually every other area, averaging 15.2 points and 6 rebounds on the season while being the rare Piston (or NBA player, for that matter) to appear in every game this season.

But for all the progress Bey has made in his sophomore campaign — BetMGM Sportsbook has him at 250/1 odds to win Most Improved Player, while 500/1 can be found at PointsBet Sportsbook and DraftKings Sportsbook — the jury’s still out on whether he’s the ideal running mate for Cunningham.

Excellent skip pass by Cade Cunningham to cut through the defense and create a tilted advantage for Saddiq Bey out of the weak corner pic.twitter.com/uAMZbN56zt

“It’s still pretty early, I’d say,” cautioned Berg. “You’ve kind of seen players peak early when they’re on a bad team, so I wouldn’t necessarily sign off on that yet. Then there’s a good chance the Pistons are in the lottery again, and if they get the No. 1 pick, Cade could be the second-best player on a possible playoff team.”

Ah yes, the lottery. The Pistons stand but an infinitesimal chance of making the playoffs, so as nice as this recent stretch of league-average play has been, there’s still plenty of incentive to tank for the sake of ping-pong balls.

That’s where Jerami Grant comes in.

Grant likely on the move; Killian ain’t killin’ it

A versatile forward, Grant is the Pistons’ highest-paid and most polished player. At 27, he’s far from old but not in the same kiddie pool as Cunningham, Bey, and other Piston pups (such as the disappointing Killian Hayes), so he holds considerable value as a trade chip who could fetch some serious assets as the deadline approaches. And there are plenty of playoff contenders — including the division-rival Chicago Bulls — who might be willing to meet a high asking price despite the fact that Grant has been out of action since Dec. 10 due to injuries and COVID protocols.

“I would think he’s got to be considered to be on the move,” said Berg. “The Lakers are one of the teams getting batted around, but I can’t imagine they’d have anything the Pistons are interested in.”

As for the Bulls, who just lost point guard Lonzo Ball for up to two months due to knee surgery, a Grant-based transaction that would send promising defensive stopper Patrick Williams to Detroit makes a lot of sense to some. And speaking of Hayes, another 2020 first-round pick who continues to start alongside Cunningham in the Pistons’ backcourt despite posting anemic numbers, Berg is not quite ready to give up on the 20-year-old.

“It’s tough,” said Berg. “Some of these kids are so young and you just don’t know: Are they just playing at this level right now because they’re still really young? One of these guys I bring up is Chauncey Billups. The Nuggets gave up on him too fast and then he was crushing it on the Pistons.”