Despite An A+ Draft, Sportsbooks Still Have No Love For The Pistons

The team may soon have the best backcourt in the NBA, but the odds remain long 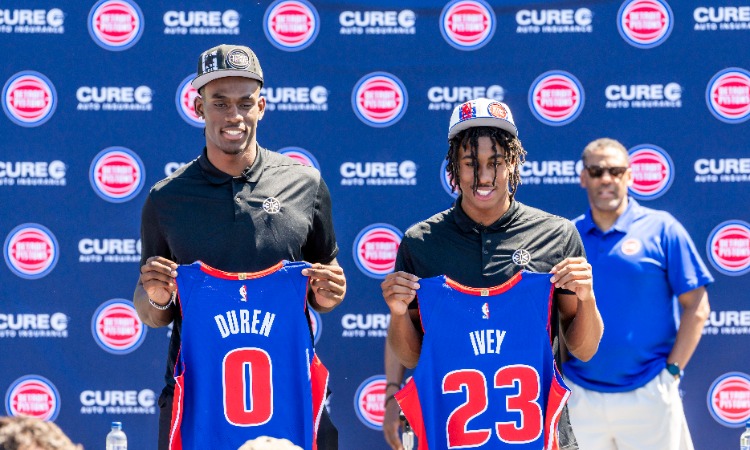 The Detroit Pistons might not have won a lot of games in recent years, but last week, they pretty much won the NBA Draft. In fact, CBS Sports gave them an A+ for their efforts, and basically every NBA watcher came away impressed with what the team was able to do on draft night.

In short: They got Purdue’s Jaden Ivey — who some are calling Ja Morant 2.0 — to match with Cade Cunningham, creating arguably the most exciting (and soon to be best?) backcourt in basketball.

Then they wheeled and dealed their way to Memphis’ Jalen Duren, a center NBADraftRoom.com called “a man among boys.”

Meanwhile, they dealt away Jerami Grant and his expiring contract and have a whopping $43 million of cap space.

Without getting too far ahead of ourselves here, the Pistons’ future fortunes are looking wonderful — but the sportsbooks aren’t convinced the future is now.

While operators have yet to post “to make the playoff odds” for the 2022-23 season, they have posted conference and title odds. And the Pistons are still on the outside looking in, not so much “underdogs” as “way under dogs, like below the kennel.”

In fact, the squad is 300/1 to win the Eastern Conference at DraftKings — that’s the second-worst odds — and 750/1 to win the NBA title at Caesars, good for the sixth-worst odds.

Why so cruddy? Probably because most prognosticators think the Pistons will be entering next season with their core and little more. In other words: Don’t expect any big free agent signings, which is probably just as well, as the free agent class this year leaves a lot to be desired.

ALL are 24 years old or younger pic.twitter.com/scw7t6Verx

Wait ’til next year?

But next year? A sampling of some unrestricted free agents includes Andrew Wiggins, Christian Wood, and Nikola Jokic (who’s expected to sign a supermax deal with the Nuggets, but dare to dream). Restricted free agents include R.J. Barrett and Zion Williamson. Players who control their options — and who can certainly get more on the open market — include Kyle Kuzma and Josh Hart.

And let’s not forget that Pistons General Manager Troy Weaver is not afraid to make moves. Who knows what he might be able to come up with this season or next.

Meanwhile, back to the odds boards, and Rookie of the Year markets, where Ivey is +650 at FanDuel to take home the iron, trailing Paolo Banchero at +350, Jabari Smith at +420, and Chet Holmgren at +480. What’s interesting about this market is Ivey is the most highlight-reel-y of this foursome, and if his flashy play meshes with a few unexpected wins early, those odds are going to shorten, and quickly.