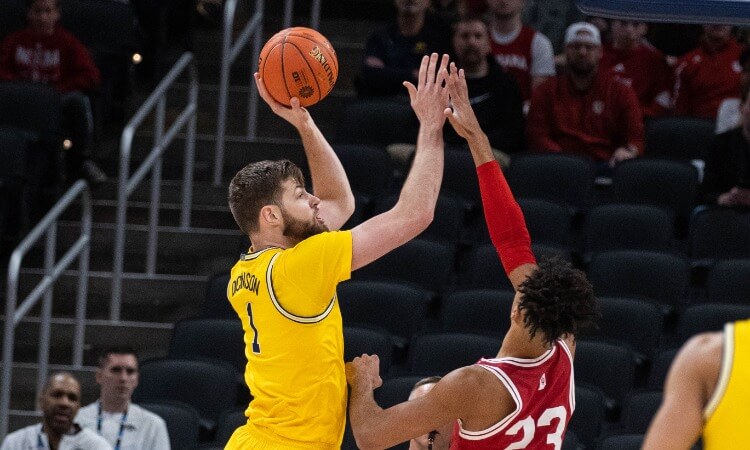 With sincere apologies to Dick Vitale, it’s a double-dipparoo for Michigan basketball fans, as Michigan State and bubbled-up University of Michigan are both headed to the big dance, each earning a bid to the NCAA men’s basketball tournament.

For the Wolverines, it was touch-and-go, as the 17-14 team got bounced by the Indiana in the first round of the Big Ten tourney after blowing a 17-point lead.

In the end, Michigan earned a No. 11 seed in the South region, and it will be playing the 6th-seeded Colorado State Rams, who finished the year 25-5 and are ranked 23rd in the nation.

On the moneyline, the best bang for the buck for a Michigan backer is -128 at FanDuel. Michigan is a 2.5-point favorite, with Barstool currently offering -108 vig there.

This is the Rams’ first tourney appearance since 2013, and they’re highlighted by David Roddy, a junior who can play every position on the floor and leads the team in scoring, rebounding, and blocked shots — and who shot over 45% from 3-point range this year. He is a 6-foot-5, 252-pound force.

For the Wolverines, the on-paper matchup for center Hunter Dickinson is pristine, especially considering the Rams’ tallest player in the rotation is 6-foot-8. Dickinson, who leads Michigan in points and rebounds, should have a field day here. And if he does — and Michigan grabs the W — the Wolverines will face the winner of the Tennessee vs. Longwood matchup.

Congrats to Hunter Dickinson ‘20 on being named to the All-Big Ten Second Team!

Hunter is averaging 18.4 points and 8.5 rebounds per game for the Wolverines this season. pic.twitter.com/bi8VpDz6zR

The 22-12 Michigan State Spartans, who grabbed the No. 7 seed in the West, will face the No. 10 Davidson Wildcats at 9:40 p.m. Friday. The Tom Izzo-led Spartans are 1-point favorites (at -105 on DraftKings) in the game. DrafKings is offering the best moneyline opportunity on them at -110, and the oddsmakers have the total points set at over 140.5 at -109 at BetRivers and under 141 at DraftKings at -110 across.

For Michigan State, Izzo might be their ace in the hole, as this marks the 24th consecutive year he’s brought the Spartans to the tournament. To advance, though, the Spartans need solid games from across their deep team, as eight players averaged more than 18 minutes a game and no one averaged more than guard Max Christie’s 31.2.

Tom Izzo the definition of what a coach should be to a player. Teaching them the game as well as teaching them to become better men!! The relationships he creates with his players are forever lasting! It’s March les get it pic.twitter.com/np3H07kOTX

The Davidson side of the coin is certainly interesting. The Wildcats are led by point guard Foster Loyer, a name certainly recognizable to the Spartan faithful, as he played three years for Michigan State before entering the transfer protocol.

The winner of this game will most likely take on Duke, the No. 2 seed in the region, which is facing Cal-State Fullerton in what will be Mike Krzyzewski’s last first round game ever, in case anyone in the world wasn’t aware.