Michigan’s Online Lottery Refuses to Slow Down for Legislative Setbacks

Michigan shows no signs of scaling back online lottery progress despite any legislative developments on the state and federal levels.

The prospects for online gambling in Michigan have had some minor setbacks of late, between former Governor Snyder’s late veto of Rep. Brandt Iden’s expansion package and the new DOJ opinions on the Wire Act. While hopes are still high that these developments will at most prove to be small speed bumps for new gaming options, it’s heartening to see that the online lottery is continuing apace without any scaling back.

The primary concern for the new Wire Act interpretation is that multi-state lottery games would no longer be legal to purchase through online means. As the Wire Act is a federal law that applies to interstate transactions only, the Michigan specific games such as Lotto 47 and Fantasy 5 are unaffected, but paranoia has spread that online lotteries would lose access to the incredibly popular Mega Millions and PowerBall games.

Thus far nothing of the sort has come to pass, and it currently seems unlikely for any such negative changes in the future. All draw games are still available on the www.michiganlottery.com website. Friday will see a Mega Millions drawing for $190 million, and on Saturday the PowerBall jackpot will be up to $260 million with the Lotto 47 top prize $1.15 million.

While the lottery has been admittedly slightly more focused on promoting its three new retail scratch-offs (Diamonds & Gold, Full of $500s, and Royal Millions, the last of which offers a potential $4 million payoff for a $30 ticket), the iLottery has not stepped back from offering new instant games and promotions in the least.

Michigan’s new featured game is Prince of Hearts, a very slight variation on the already popular reveal game Queen of Diamonds. The gameplay is identical, with the only minor changes being the rules of the bonus mini-games and the fact that you have fewer choices as to how many tickets you purchase per pay. Each ticket costs $0.05 to $2, but must be purchased in groups of 6 with a maximum of 18, making the real cost $0.30 to $36 (in Queen of Diamonds you chose multiples of 3, meaning the minimum play was $0.15, though this option gives terrible odds for unlocking the bonus features anyway.) 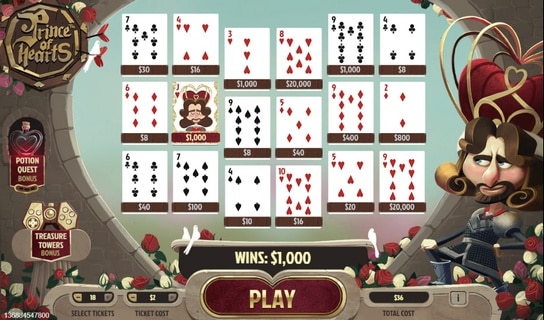 Any Jack of Hearts cards revealed reward the prize amount shown (which then asks the question why they did not name this game Jack of Hearts instead of Prince, assuming they are not just trying to avoid association with a classic Bob Dylan ballad). Revealing three magic potion symbols unlocks the Potion Quest bonus game, in which you open bottles to earn cumulative prizes. A controller symbol on any ticket launches the Treasure Towers bonus game, which allows the player to build collective prize value on towers of cards. Prince of Hearts has a 1 in 31.94 chance of winning with a top prize value of $60,000.

Michigan’s lottery is also offering a new instant game called End Zone Payout, assumingly football-themed in honor of the recent Super Bowl but still available. The game is a step forward for online lottery interaction, as it involves watching a pre-determined video of a football team executing a play. The vast majority of plays are incomplete passes resulting in a loss, but various other outcomes reward a prize proportional to the ticket value. 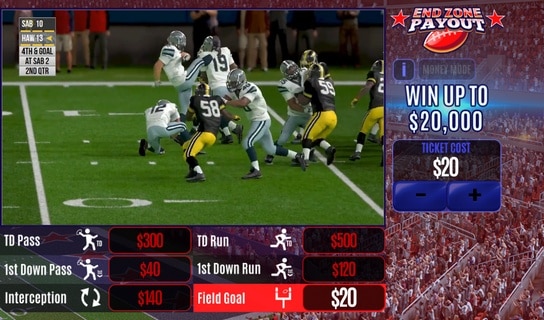 The video can of course be skipped turning the game into a simple win/lose reveal, but that seems to be defeating much of the point. Tickets cost from $0.50 to $2 with a top prize of $20,000. The overall chance of winning is 1 in 3.20.

This month the iLottery is also offering a Cash for a Year Giveaway promotion. Between now and the end of February 28 new account holders will receive a single entry and first-time deposits will earn 100 entries to a sweepstakes drawing at the beginning of March. A single grand prize winner will receive the equivalent of a full year of weekly $500 prizes: total win of $26,000.