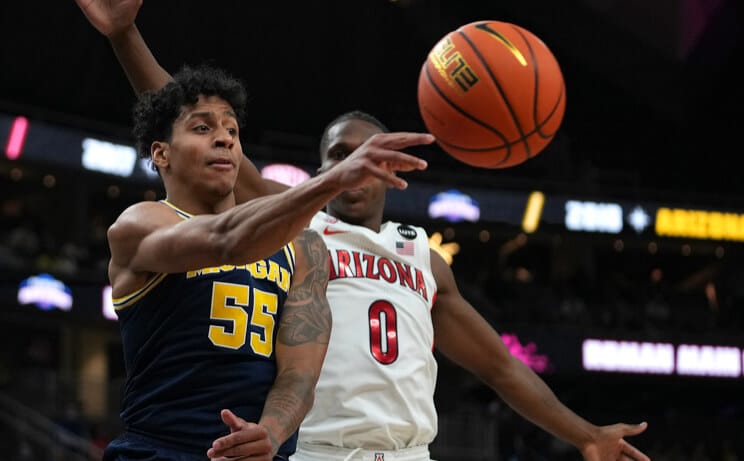 Before the start of the Big Ten tournament, WynnBET Senior Trader Motoi Pearson rated that conference as the second best in the land, behind the SEC.

But now that the NCAA Tournament field has been narrowed to 16 teams, how do those two conferences look? The SEC has but one remaining entry (Arkansas) in the regional semifinals, while the Big Ten has two (Purdue and Michigan).

“Eighteen teams in the last two years have gotten to the NCAA Tournament from the Big Ten and we’ve only had three advance to the Sweet 16,” said Jon Rothstein, a CBS Sports insider who has a content partnership with FanDuel. “Let’s face it: This league doesn’t perform in the NCAA Tournament.”

Added Pearson, “I would say it’s definitely a disappointment. Iowa losing that game to Richmond was kind of a reflection of how these other teams went down. I think the draw was tough for Michigan and I think it was somewhat of a surprise that they beat Tennessee.”

Indeed it was. In fact, it was somewhat surprising that the Wolverines made the tourney in the first place, seeing as they blew a huge second-half lead and got outscored 31-9 down the stretch to lose to Indiana in the first round of the Big Ten tournament.

But the 11th-seeded Wolverines, led by 7-foot-1 scoring and rebounding leader Hunter Dickinson, have been a totally different team in the NCAA tourney. They staged furious second-half rallies to notch convincing comeback wins over sixth-seeded Colorado State and third-seeded Tennessee.

“They’re a big name — they are Michigan — and they’ve proven everyone wrong,” said Pearson. “Their being in the Sweet 16, Juwan Howard’s job seems pretty safe.”

Had the Volunteers held on to their late-game lead over Michigan, Pearson said, they would have been narrowly favored against second-seeded Villanova on Thursday in San Antonio, the site of the Wildcats’ last NCAA title win — against Michigan, of all teams. Instead, Michigan is a consensus 5-point underdog against ‘Nova, which is led by the seasoned backcourt combination of Collin Gillespie and Justin Moore and is somewhat shy on height up front. BetMGM  is a narrow outlier among major Michigan sportsbooks with reduced juice (-105) on Michigan +4.5.

The consensus over/under for the ‘Nova-Michigan tilt, which gets underway at 7:29 p.m. ET, is 135.5, with Caesars and FanDuel differing slightly with a 135 total. Meanwhile, the best Michigan moneyline value for sports bettors is +188 at FanDuel.

While Michigan’s presence in the Sweet 16 is certainly surprising, Howard’s squad boasts elite talent, if not experience. To wit, the Wolverines were ranked sixth in the AP’s preseason Top 25 before getting their doors blown off by Arizona and North Carolina (both of which are also in the Sweet 16) in early season action.

“In hindsight, I think Iowa State was probably the most surprising [team to make the Sweet 16],” said Pearson. “I’m a big Metro Atlantic guy, so I knew St. Peter’s had been very solid over the last couple of years and couldn’t get over the hump with Iona. The Big 12 has quite a few representatives still in the tournament (three, to be exact). Iowa State had a great non-conference schedule. Looking back on it, the Big 12 seems pretty tough.”

Michigan’s odds to claim the school’s second NCAA title range from 50/1 at BetMGM to 75/1 at WynnBET, where the Wolverines have the third-longest odds (along with Providence and Miami) to win it all behind Iowa State (125/1) and St. Peter’s (300/1). Pearson said that order to get by Villanova, the Wolverines will have to adroitly defend the 3-point line, which they did against both Colorado State and Tennessee. The latter went an atrocious 2-18 from beyond the arc.

“Villanova is 18-3 in the last six NCAA tournaments, so I have full confidence that they’re gonna be their best when it matters most,” said Rothstein. “And they have maybe the best closer in the game in Collin Gillespie. The weakness for Villanova is always going to be interior defense, so it’s an advantage for Hunter Dickinson. Michigan is also going to have to match the wit and the grit and toughness of Villanova.”

Should their unlikely run continue, the Wolverines will face either fifth-seeded Houston or top-seeded Arizona in the Elite Eight. As for which of those squads Michigan would have a better shot at toppling, Pearson’s response might strike some as unexpected.

“I watched Arizona and Michigan play and [Arizona] smoked ’em,” said Pearson. “But, honestly, if you can get a look at a team that’s already beat you, I’m not saying it’s a better matchup, but they’ve already seen that team and haven’t seen Houston yet. Both would be a tough matchup because they’re two of the best teams I’ve watched all year. But at least with Arizona, [the Wolverines] can look at where they need to make some adjustments.”

“I don’t think Michigan can score enough to beat Arizona, but I don’t think anyone wants to play Houston,” added Rothstein. “Villanova has the best culture in college basketball, and Houston’s 1A.”