Spartans' win over Michigan puts them in the national championship picture, even if still longshot 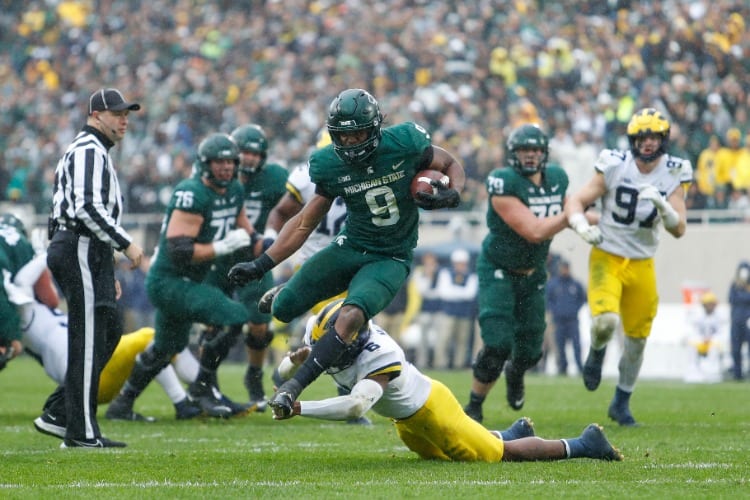 Well that was a humdinger of a game, eh?

Seriously: The scoreboard told a close battle full of fireworks — Michigan State 37, Michigan 33 — and it certainly was that.

But it was so much more.

It was, just about inarguably, the best game of the 2021 NCAA college football season to date. It had it all — big plays, big comebacks, nail-biting fourth quarter. It was one of the best — and most important — games played between these two squads in the 114-game history of the rivalry.

Going into the game, we knew the winner would be A) climbing the AP top 25 rankings B) making a case for serious national championship discussion and C) eyeing up Ohio State.

And with the victory, Michigan State is that team. At 8-0, it is now ranked fifth in the nation, behind only Georgia, Cincinnati, Alabama, and Oklahoma.

On Tuesday, the first set of rankings for the College Football Playoff will be revealed, and Michigan State is obviously either going to be listed as qualifying currently or just outside that group of teams.

For now, the sportsbooks don’t seem to care either way, as the Spartans aren’t exactly the favorites to hoist the national championship trophy, with odds as high as +8000 on FanDuel to as short as +3000 on BetMGM.

Notably, Ohio State is given a much better shot than Michigan State to win it all. And why is this notable? Because the two teams face off in Ohio Stadium on Nov. 20. The winner of that game … well, let’s not get too far ahead just yet.

Michigan State still has to knock off Maryland at home a week from Saturday. The Spartans are expected to be heavy favorites in that matchup.

But the Ohio State game is certainly circled on the calendar. Assuming the Spartans dispatch the Terps, a win over the Buckeyes would come close to cementing their playoff status. And if they then can hold off Penn State at home in the season finale, an 11-0 season would be one of the most surprising runs in recent college football memory.

Coming into the season, the Mel Tucker-led squad was hoping for improvement after last year’s COVID-shortened 2-5 record. They were — obviously — unranked coming into the season. They were +30000, at best, to win the championship. There was a lot of talk about which running backs were going to see the field.

Kenneth Walker III saw his Heisman odds on FanDuel go from +4000 to +600 after Saturday’s 193-yard, five-touchdown performance. That’s good for third, behind Alabama quarterback Bryce Young at +150 and Ohio State quarterback C.J. Stroud at +350. Matt Corral, quarterback for Ole Miss, is also at +600.

Kenneth Walker III was turning heads in a Heisman-level performance against Michigan.

While Young is clearly the favorite, Corral isn’t as shiny after Ole Miss lost this past weekend. Once again, circle those calendars for Nov. 20 in Columbus, because if Michigan State wins that game and Walker gives another performance that even sniffs what he did Saturday, those +600 odds are going to be a lot closer to even money. Also notable: No Michigan State player has ever won the Heisman.

It’s been a surprising year for the Spartans, and as the calendar turns to November, the team is suddenly three victories away from a perfect season and a transfer running back is closing in on the nation’s highest individual football honor.

Yeah, a surprising season, no doubt.