Michigan And Michigan State Meet In A Battle For The Ages

For the first time in decades, the teams face off with national title dreams on the line for both 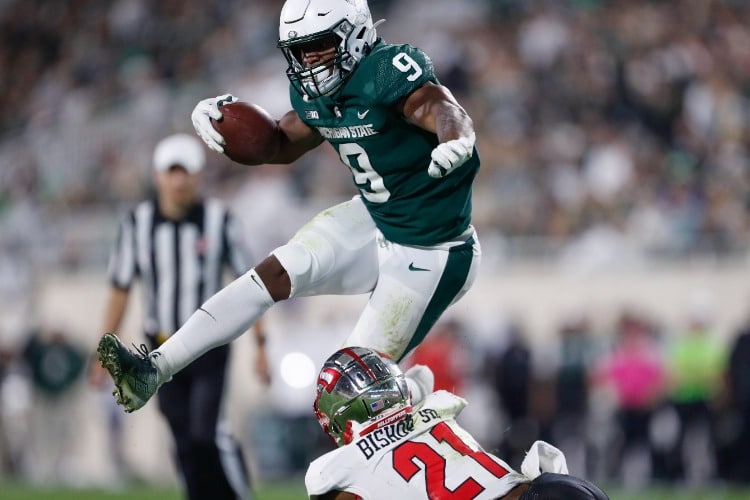 In the immortal words of Keith Jackson, whoa nelly.

This year’s Michigan vs. Michigan State matchup — the highlight of any year — takes on so much more significance this time around, as both teams enter the game with identical 7-0 records. It’s the first time that’s happened in the 113-year history of the rivalry.

Even more crazy? It’s the first time both teams — Michigan at No. 6 and Michigan State at No. 8 — have faced off against each other with both teams sitting comfortably in the top 10 since … 1964.

That’s right. The last time the Wolverines and Spartans faced each other as top 10 teams, Roy Orbison’s “Oh Pretty Woman” topped the charts, My Fair Lady was boffo at the box office, and Bonanza was the most-watched show in the country.

This is how Bob Ufer intro’d the 1979 M-MSU Game and also seems appropriate for this week as well… pic.twitter.com/QfXg47CkFE

History aside, this is basically a playoff game for these two squads, with the loser dropping out of the current three-way tie for first place in the Big Ten East, and more importantly, almost certainly dropping out of any chance for a national championship.

Not that the winner is guaranteed anything here, either. After Saturday, Michigan still has games against 20th-ranked Penn State in Happy Valley and a season-ending home tilt with Ohio State, along with Indiana and Maryland sandwiched in.

But while the future is uncertain, one thing is for sure: This is setting up as a game to remember.

Michigan/Michigan State week consists of 6 Monday's and a Saturday.

And the sportsbooks agree.

On the moneyline, the best bang for the buck on Michigan can be found at FOX Bet Sportsbook, at -188. For Michigan State, WynnBet Michigan is offering +170.

Point spread-wise … well, talk about a moving target. Things are unsettled at the time of this writing, with the spread bouncing between 3.5 and 4.5 points, with Michigan favored on the road.

At -3.5, Michigan bettors can get -115 odds at FanDuel Michigan, while Michigan State backers can get the 3.5 points for +102 at Barstool, BetRivers Sportsbook, and TwinSpires.

Finally, at -4.5, backers of the Wolverines can get even money at FOX Bet, while Spartan fans can get the points at -115 across all the books.

5x your money if both Michigan & Michigan St. have interceptions in Saturday's #BigNoonKickoff game.

FOX Bet is also offering a dream scenario for fans of extended action — odds on overtime, with +1400 for “yes” and -3300 for “no.” Not exactly what one might call a tight spread, but such is life.

The FOX-televised game kicks off at noon at Spartan Stadium in East Lansing. Buckle up, because this one is going to be something.