The Detroit Lions have been eliminated from playoff contention, but are looking to close out their home season on a high note. 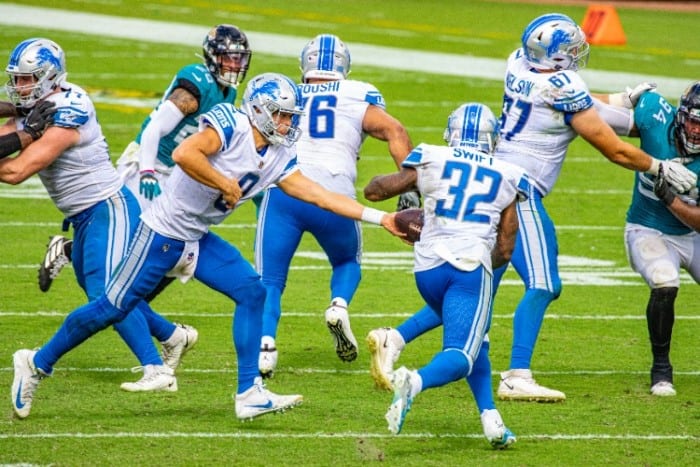 Well, much like Jim Carrey’s character, the Lions aren’t getting the girl, or, in this case, a ticket to the NFL playoffs.The Lions’ slim hopes of making the playoffs came crashing down with a loss to the Tennessee Titans last week. The Lions got thrashed, 46-25, and the game wasn’t really anywhere near as close as the score would indicate.

Alas, there is always next year, and the Lions — assuming Matthew Stafford doesn’t demand a trade, and assuming Kenny Golladay decides to re-sign, and assuming D’Andre Swift starts laying claim to being a top-five running back — might be poised to compete.

Alas #2: That’s a lot of assuming, and it doesn’t even take into account the fact the Lions’ struggles on the defensive side of the ball have been real and supremely unspectacular all year.

In the meantime, the Lions come back home for a Saturday afternoon tilt against the Tom Brady-led Tampa Bay Buccaneers, a team with a dynamite offense, a sometimes-stifling defense and a squad that’s heading to the playoffs barring both a major meltdown and crazy things happening with other would-be contenders. To wit: The Bucs are -10000 to make the playoffs over on DraftKings.

Predictably, the sportsbooks have the Bucs as 9-point favorites on DraftKings and BetMGM, and 9.5-point favorites on FanDuel. The best moneyline bet is over at BetMGM, which has the Lions at +350. While the Bucs are heavily favored, the sportsbooks agree this game should be high-scoring, with the over/under set at 53.5, currently the second-highest on the board. So even though the Lions are expected to lose, they’re also expected to score three touchdowns, so expect some offense.

And where will it come from on the Lions?

Almost certainly through the arm of Stafford and probably through the hands of Marvin Jones, as the idea of Golladay seeing the field again this year seems like a twisted fable.

The Buccaneers, despite a fearsome pass rush — they’re 8th in sack percentage at 7.35% — are giving up 255.3 yards through the air, good for 25th in the league. Conversely, running the ball on Tampa has been a fool’s errand, with the Bucs No. 1 in yards per carry against, at a measly 3.4.

Of course, Swift, the Lions’ electric rookie running back — who scored twice last week on 19 touches for 82 yards — is a top-notch receiving back as well, so it would seem to be in Bevell’s best interest to get him moving pre-snap and out into the flat pronto.

On the defensive side of the ball … well, it’s not been good. The Lions defense has more holes in it than just the holes part of Swiss cheese, and the Tampa offense is going to be able to do whatever it wants. Honestly, the Lions’ best chance of sneaking a victory would be to dare the Buccaneers to run the ball on every down, and hope the front four can make enough tackles to keep the game clock moving.

Stafford guts it out

A betting market to watch: the Lions’ second half number. Stafford is a competitor, and Bevell is coaching for a future job. The one thing the Lions offense won’t do is fold. If one thinks the Bucs jump out to a big early lead and then pull the brakes on offense and soften up on defense, the Lions could put all their points on the board in quarters three and four.

On the player prop side, Stafford should be throwing from the jump, and his passing yards number — along with Jones’ receiving number — might be attackable.

On the Tampa side, who knows. A lot of mouths to feed and an offense that will be able to do what it wants.