Things are heating up in Michigan for legal sports betting, as a lawmaker plans to introduce a new bill in the coming weeks. 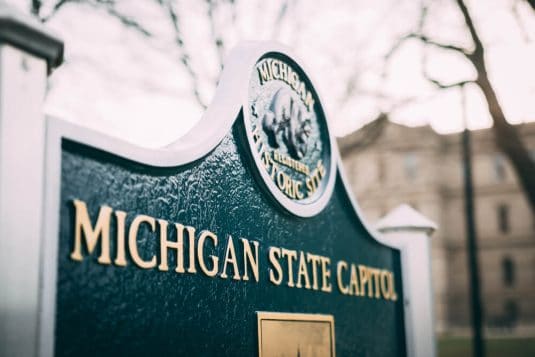 The state of Michigan is home to an online casino bill on the table right now, which would pave the way for mobile sports bets. But there’s also a plan to introduce a new, separate bill for sports betting in as soon as two weeks. That bill would create a full-fledged framework for regulated sports betting, both online and in-person, in the Wolverine State.

Ideally, Michigan would have legal sports betting during the upcoming NFL season, according to state Rep. Brandt Iden, sponsor of the online casino bill. Iden, a Republican, will be pushing the sports betting proposal as well. Time will tell if that timeline for launch can come to fruition.

Even though there is a route for online sports betting under the online casino bill, Iden said the Michigan Gaming Control Board would like to see a full-fledged statute.

As for the online casino legislation, Iden is planning a Ways and Means Committee hearing on the proposal for the first week in May, which he says can set the stage for the Michigan Lawful Internet Gaming Act to be sent to Gov. Gretchen Whitmer, a Democrat, this summer. The online casino legislation had bipartisan support last year on its way to the desk of former Gov. Rick Snyder, who vetoed it just a couple of days before the end of 2018. Snyder effectively punted the expansion of gambling issue to the next governor.

Whitmer getting up to speed

There’s been speculation that Whitmer is wary of what impact the bill would have on the state’s tribal casinos, who have revenue-sharing agreements with Michigan. Under Iden’s online casino legislation, the tribes can be involved with internet gambling under the regulation of the Michigan Gaming Control Board. Iden’s legislation is the first of its kind in the nation in that regard.

According to Iden, the Whitmer Administration is currently doing its “due diligence” on that front. It’s a process that needs to happen for the new governor, who took office less than five months ago. Iden doesn’t have any concerns about the tribal component of his legislation.

“The Administration is new to this,” Iden told MI Bets. “They are going through and meeting with the tribes to make sure they are comfortable with it.”

That heavy lifting was done last year, and by the end of the session Iden’s bill satisfied Michigan’s gaming stakeholders. There’s no indication that the tribes are having second thoughts about the bill.

While the Whitmer Administration is vetting the legislation, Iden said that there will be some back and forth with the governor on the final version.

In addition to double-checking to make sure the tribes are on board with the changes to the Michigan casino gambling landscape, the Administration is looking at what impact the bill would have on the state’s School Aid Fund. According to Iden, Whitmer is inspecting the bill to ensure there is no loss of revenue to the fund. Iden doesn’t see that happening under the framework in his bill.

Still, Iden said that he’s open to negotiating with the governor on the taxes. At a hearing on the legislation in March, proposals to double the effective tax rate were voted down.

“I look forward to negotiating with the governor,” Iden said. “I am willing to entertain the discussion. I want to deliver a bill to her desk that she’s willing to sign.”

Iden said there’s “a lot of momentum” right now for online gambling in Michigan, adding that he thinks the Whitmer Administration will be finished getting up to speed in early May, setting the table for discussions on ironing out the last remaining wrinkles in the legislation.