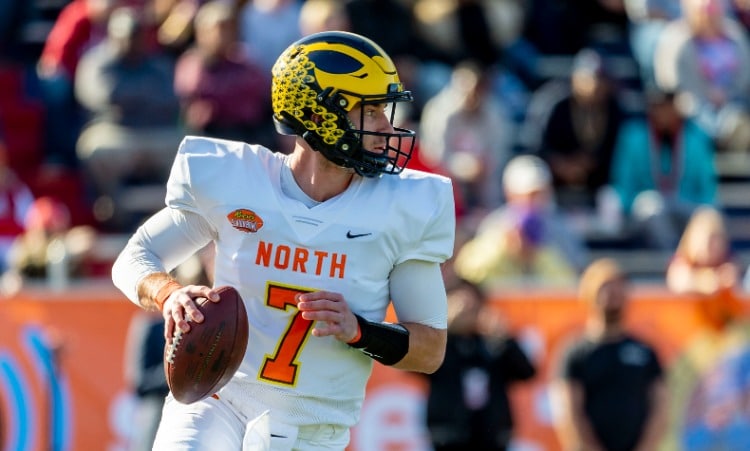 While sportsbooks haven’t yet announced that they will be taking bets on USFL action, it would appear likely as markets on non-NFL football were offered previously for both the XFL and AAF (as well as DraftKings and FanDuel offering DFS contests).

And so if the books go ahead and offer full markets, Patterson makes an intriguing bet right off the top for MVP.

Patterson, a two-year starter for the Wolverines, was the top-rated quarterback in the nation coming out of high school in 2016, according to 247Sports.com, and the fourth-ranked overall player. He started his career at Ole Miss, transferring to Michigan for the 2018 season. He became a third-team All Big Ten quarterback both years and only the third Michigan quarterback to throw for over 3,000 yards.

Post-college, Patterson went undrafted, eventually signing with the Kansas City Chiefs in May 2020 before being waived two months later. Since then, he signed – but didn’t play — with both the BC Lions and Montreal Alouettes of the Canadian Football League. He also is under contract with the Texas Rangers, having been drafted in the 39th round of the MLB draft in 2018.

And while Patterson, by virtue of being picked first, probably has the inside track to be the Panthers’ starting quarterback, the Panthers also drafted former Denver Broncos first rounder Paxton Lynch later in the draft. (The USFL draft went position-by-position, unlike other drafts where any players can be picked at any time.)

Some Michigan State Spartans also heard their name called during the draft, including tight end Matt Seybert (Maulers) and guard Tyler Higby (Houston Gamblers) to go along with Taiwan Jones.

All contests in the 10-game USFL season will be played in Birmingham, Alabama this year, though each team is to host games next year.

The Panthers kick off the campaign the weekend of April 17. The full schedule of games has yet to be finalized. All games will be broadcast on FOX, FS1, NBC, and the USA Network, with a four-team playoff round to be held in Canton, Ohio.