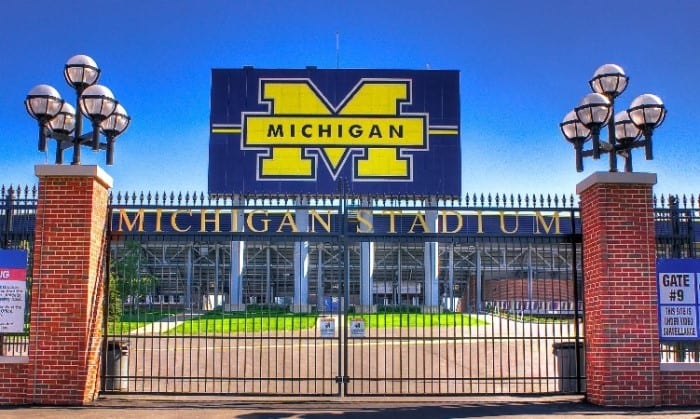 Jim Harbaugh enjoyed the best season of his tenure as the University of Michigan coach last fall.

The Wolverines are coming off a 12-2 campaign that included winning the Big Ten title. Along the way, Michigan toppled rival Ohio State, which is something that fans had been waiting to see happen ever since Harbaugh returned to his alma mater to become head coach in 2015.

The good vibes remain in Ann Arbor these days as they practice for the upcoming Spring Game slated for April 2.

In spite of losing to eventual national champion Georgia in a College Football Playoffs semifinal, the Wolverines still entered spring football practices with a swagger and confidence that hadn’t been present before under Harbaugh’s watch. “We’re having a blast and are continuing that on as we get going here in spring ball,” Harbaugh said.

FanDuel Sportsbook has odds for Michigan of +4000 — the same as USC and Oklahoma— to win the 2022-23 national championship. Only five other programs, led by Alabama (+200), have shorter odds.

At other online sportsbooks that operate in Michigan, the price on the Wolverines is slightly shorter. BetMGM has them at +3500, and DraftKings prices them at +3000.

Contributing to the positivity in Ann Arbor with spring approaching is the knowledge that Harbaugh will be back as head coach. There was plenty of speculation and concern about whether he would return after leading the Wolverines to a No. 3 ranking in national polls last season, which was their highest finish since 1997.

Harbaugh, who entertained the idea of returning to coaching in the NFL, signed a five-year contract to remain at Michigan. The contract extends through the 2026 season.

Any dreams of winning a Super Bowl trophy, which he came close to doing as the San Francisco 49ers coach in 2013, have been shelved. His focus is on trying to lead the Michigan program to the No. 1 spot in college football.

“We can win college football’s greatest trophy,” Harbaugh said. “We could win the national championship and that’s plenty good.”

The Wolverines will begin the 2022 season with four straight home games at the Big House, starting with the season opener against Colorado State (Sept. 3), followed by Hawaii (Sept. 10) and Connecticut (Sept. 17). Their fourth game of the season is their Big Ten opener and homecoming game against Maryland (Sept. 24). In all, they’ll play eight home games.

Quarterbacks Cade McNamara and J.J. McCarthy and offensive linemen Trevor Keegan and Zak Zinter are leading returners for an offense that is expected to be as potent as it was last season when Michigan averaged 35.1 points a game. McCarthy, who has been nursing an arm injury, hasn’t been allowed to throw the football during spring workouts. However, he is not expected to need surgery.

Defensively, the Wolverines will need to find replacements for standout linemen Aidan Hutchinson and David Ojabo, who combined for 25 sacks last season. Hutchinson, who is projected as a possible No. 1 selection in the upcoming NFL Draft, set the UM single-season record with 14 sacks.

Jim Harbaugh says Mike Morris could be the next Aidan Hutchinson or David Ojabo. I liked what Morris showed last season, and see a lot of parallels in his game to Chris Wormley's. He was one of my five Michigan players with the most to gain this spring: https://t.co/L9dDA23t2c

Linebackers Mike Morris and Junior Colson saw plenty of action last season when the Wolverines held their opponents to 17.4 points per outing.

“Mike Morris could be the next Aidan Hutchinson or Ojabo,” Harbaugh said. “So, there’s some really exciting things going on with the defensive line.”

The optimistic outlook also stems from another stellar Top 10 recruiting class for the Wolverines, who signed 23 players in December. The group was ranked eighth nationally by Rivals and ninth by 247Sports.

“It’s just great to see them out there,” Harbaugh said. “You can see what they can do physically, then you can project, ‘Yeah, this person is going to have a really good chance of playing early.’”

The traditional Spring Game didn’t take place a year ago due to COVID-19 concerns. So it’s exciting for Harbaugh to think about holding this year’s Spring Game before an enthused Michigan fan base.

“It’s going to be awesome,” Harbaugh said. “We love the Spring Game. It creates a lot of energy, a lot of juice on the team, because it’s actually a real game. Some guys that haven’t played in the game, they get that opportunity.”