New players on the Michigan online lottery site can receive 100 chances to score $500 a week for a year, thanks to Cash For A Year Giveaway.

Michigan’s online lottery continues to enjoy success, but despite having signed up nearly 820,000 players, the Mitten State continues to look for new ways to entice new people to try their hand at iLotto games.

This July an introductory contest and a colorful new instant win game are added to the list of reasons to sign up if you haven’t before.

The Cash for a Year Giveaway is a sweepstakes for new players that sign up in the month of July. Anyone who creates a new account on www.michiganlottery.com will automatically receive a single entry into the contest, but upon making their first real-money deposit into the account they are granted an additional 100 entries. Which is to say that technically anyone has a chance to win – whether they deposit money or not – but the statistical advantage is obvious.

Entries can be earned any time in July, with the sweepstakes drawing to occur on August 8th. The grand prize winner will receive a monetary award in the form of $500 each week for a full year.

This contest is running on top of the standard welcome bonuses still available, which include: a 50% First Deposit bonus (up to $100 awarded), 10 free online games, and a $10 Instant Game coupon after your first deposit of at least $10 or first purchase of a $10 instant game ticket.

A rainbow of winnings

On the heels of the recent Road Trip USA scratch-off, the online lottery has also added a new instant game called Rainbow Fortunes. This is a connect-three style ticket with a 5×5 grid and two bonus mini-games. The standard symbols follow a theme suspiciously similar to a certain superstitious children’s breakfast cereal. 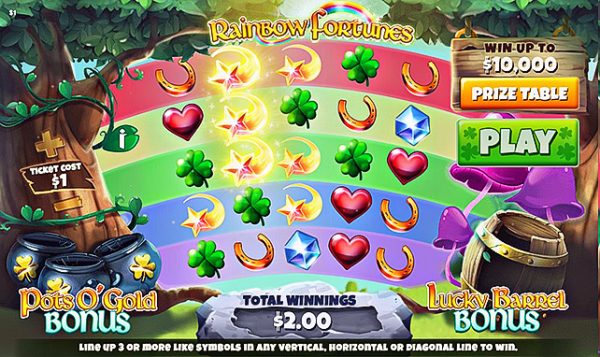 In addition to prizes for finding a line of three or more matching symbols in any direction, bonus cash can be won by finding three “Pots o’ Gold” anywhere on the board, or a single “Lucky Barrel” hiding behind another symbol.

Upon unlocking the gold players are given a choice between three pots which hide varying prize amounts. In the case of the Barrel mini-game, a rolling wheel can land on either prize amounts or a “collect” line, with the possibility of accruing up to eight combinable cash amounts.

The online lottery also continues to run their other ongoing promotions, such as the Daily Spin to Win prize wheel. Additionally, the Home Run Riches Online contest concludes on August 5th, and one player will win two World Series tickets and travel accommodations.

Mega Millions fans have some reason to be excited, as the current jackpot for the Tuesday July 3rd drawing is now up to $256 Million. Unfortunately the top prize for Powerball has yet to climb that high after a recent $150 Million win in Oregon, but the Wednesday July 4th drawing is offering a respectable jackpot estimated at $70 Million. Michigan’s state games are also similarly climbing back up after recent resets, with Monday’s Fantasy 5 drawing estimated at $110,000, and the Wednesday Lotto 47 jackpot expected to reach at least $1.85 Million.

The Michigan Lottery is also keeping its eye out for the Jackpot Slots Fast Cash winner who never cashed in his or her $520,000 ticket purchased in Detroit last year. The player has only until the anniversary of the purchase, July 27th, to claim their substantial winnings or the prize will be nullified and the money turned over to the School Aid Fund.