Michigan, MSU Fans Shouldn’t Get Their Hopes Up This Season

For bettors, Captain Khaki's Wolverines could be a good buy-low proposition 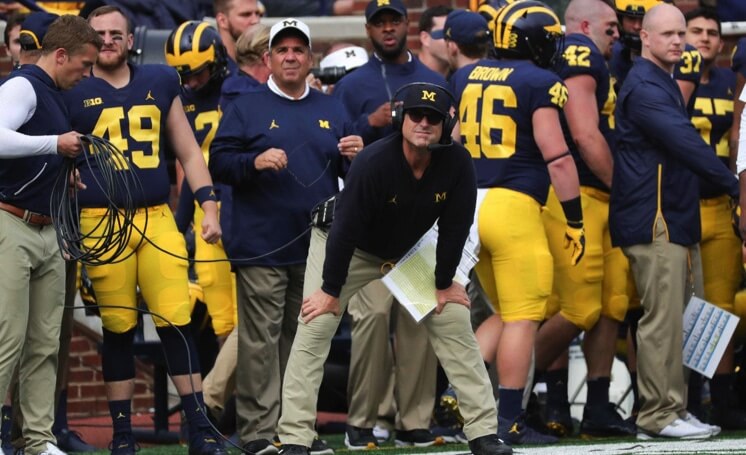 By the lofty standards of top-tier college football in the Great Lakes State, 2021 is expected to be something of a crap sandwich, with WynnBET offering an over/under of 7.5 on total Wolverine wins and 4.5 for the Spartans (contingent, in each case, on 12 games being played amid the frustratingly stubborn COVID pandemic), with most other books right in that range.

“Especially on Michigan’s end, where they’ve been a team that’s been highly talked about [over the years], this is probably one of the times where they’re at their lower point under the Harbaugh era,” said WynnBET Senior Trader Motoi Pearson. “On the Michigan State side of things, [Coach] Mel Tucker has got to rebuild a little bit.”

But low expectations could lead to some good opportunities for sports bettors.

“I like Michigan,” noted Pearson. “I want to buy them low because nobody’s really talking about them. Michigan being 100/1 to win the national title is pretty interesting.”

During the COVID-shortened 2020 season, Michigan and MSU brought up the rear in the Big Ten East, with records of 2-4 and 2-5, respectively. The highlight of Tucker’s first season as the Spartans’ head coach was a 27-24 victory over the Wolverines in the Big House. Had Michigan’s annual rivalry game/loss against Ohio State not been canceled, the cellar dwellers would have switched spots.

They’re not expected to fare a whole lot better this year, with Michigan (+1600 to win the division at FanDuel) picked to finish fourth in the East behind Ohio State, Penn State, and Indiana, while State (+6000) is expected to finish dead last. Sandwiched between them, odds-wise, is Maryland (+5000).

Michigan State opens its season Friday night at Northwestern as 3-point underdogs at WynnBET (the spread is 3.5 at DraftKings) after beating the Wildcats, who finished atop the Big Ten West with a record of 6-1, in East Lansing last year. Northwestern actually opened as 7.5-point favorites at WynnBET and other books before getting bet down, and Pearson said he expects “some type of buyback on MSU down the line,” while acknowledging that there “should be some type of dropoff with the guys that [Northwestern] lost.”

The Spartans should be favored to win in East Lansing against Youngstown State, Western Kentucky, and Maryland, with either a winnable road game against Rutgers or a home victory against Nebraska getting them to four wins. After that, it’s tough to spot a potential upset on the rest of State’s schedule.

But what about the Oct. 30 game against Michigan in East Lansing?

“I think Michigan should be able to win that game,” said Pearson, who has the Wolverines favored by 10. “I put a lot of thought into how that might play out.”

Yet, as Pearson correctly states, “The Big Ten is pretty tough as you get into the season.” To this end, it wouldn’t completely surprise him if the Spartans pulled off massive midseason road upsets against either Indiana (where they’ll likely open as 19-point underdogs) or Purdue (11-point dogs).

“Those are two spots where I could see them coming up big,” said Pearson, noting that Temple transfer Anthony Russo represents an upgrade at quarterback from Rocky Lombardi, who transferred to Northern Illinois after last season.

Michigan, led by junior quarterback Cade McNamara (300/1 at WynnBET to win the Heisman), will face Northern Illinois on Sept. 18 in Ann Arbor, where they’re likely by be favored by about double what they are in Saturday’s season opener against another MAC squad, Western Michigan. (WynnBET and other books have Western listed as 17-point dogs.) The Wolverines’ true early season test will come on Sept. 11 at home against the 20th-ranked University of Washington Huskies, a game Pearson currently has as “a pick.”

“I think last year Michigan was a two-point favorite [at Washington] and people ended up betting Washington before it got postponed because of COVID,” he added.

The seven most likely wins on Michigan’s schedule look to be Western Michigan, Northern Illinois, Rutgers, and Northwestern at home, as well as Michigan State, Maryland, and Nebraska on the road. To hit the over at eight wins, they’ll have to topple either Washington or Indiana at home. And Pearson thinks the Wolverines have a chance to upset either Wisconsin or Penn State on the road, where he expects Michigan to be 8- to 9-point dogs.

That leaves the regular season finale: Ohio State in Ann Arbor on Nov. 27. The mighty Buckeyes are the overwhelming favorites to win the Big Ten title and are also expected to compete for a national championship. The Wolverines have lost eight straight games to the Buckeyes, including all five that Harbaugh has coached in. The only longer losing streak in the rivalry came when Ohio State dropped nine straight games to Michigan from 1901-1909.

‘You can only lose so much in a rivalry’

While a lot can happen between now and the Saturday after Thanksgiving, it’s a pretty safe bet that Ohio State will be heavily favored to win. And for a lot of Michigan fans, all that matters is The Game.

“You can only lose so much in a rivalry,” said Pearson. “I would say, in a year like this, I think it would look much better if Harbaugh can make it respectable. For his job, I think it’d be a big deal if he did win The Game this year.”

But for Harbaugh — who somehow convinced Michigan to give him a four-year contract extension in January, at something of a discount and with a pretty cheap buyout — to lose his job after this season, Pearson thinks things would have to be “cataclysmic.”