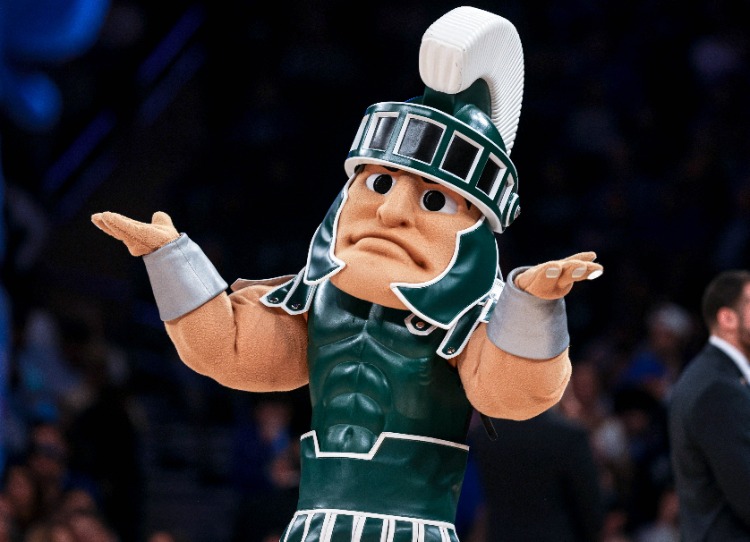 Well that got muddled fast. Fresh off its thrilling victory over the University of Michigan, Michigan State went out last Saturday and promptly fell right into the trap game narrative, getting toppled by unranked Purdue 40-29.

Purdue wins their 17th game against a Top 5 team when unranked.

MOST IN COLLEGE FOOTBALL. pic.twitter.com/JfbwzFpOMh

And just one week after being in the inaugural top four of the College Football Playoff rankings, the Spartans got bounced all the way down to number seven — with them somehow below number six Michigan.

“It was discussed that Michigan might be the more complete team,” CFP chairman Gary Barta said on ESPN. “The discussion in the room went back and forth, but at the end of the day, we felt Michigan was the better team this week.”

At any rate, all of a sudden the Big Ten East picture is muddied, with Ohio State sitting on top with a 6-0 conference record, trailed by both the Spartans and Wolverines at 5-1. Notable: Michigan State travels to Ohio State Nov. 20, and Ohio State visits Michigan the following week.

In short, there is a lot of season left. But first, both Michigan teams need to get back on the winning side of the ledger.

For Michigan State, that means a trip to College Park, Md., and a tilt with the Terps.

The Spartans are 12.5-point favorites at Barstool and BetRivers at -109, and -13 favorites favorites at -105 at FOX Bet and TwinSpires. On the moneyline, the best bang for the buck can currently be found at BetMGM at -500.

As for Michigan? It heads to Happy Valley to take on Penn State, and the nation’s sportsbooks have marked this one as a much tighter affair, with the Wolverines 1-point road favorites at +100 on FOX Bet. On the moneyline, Michigan at -108 is the best you can currently find at Barstool and other books.

Michigan is 8-1 and Hassan Haskins is good at hurdling pic.twitter.com/ZWakhvmJOd

A lot has changed in a week, as it turns out.

Over at FanDuel, you can also wager on the eventual winner of the Big Ten, and Michigan at +1000 and Michigan State at +2500 certainly offer value.

And lastly, as far as individual awards go, Kenneth Walker III’s ascent toward the top of the Heisman odds board has continued. He’s down to +280 on DraftKings and +450 on FanDuel, while BetMGM splits the difference at +375.

From second-string RB and virtual unknown to transfer portal treasure and Heisman candidate.

If you didn't know who Kenneth Walker III was before, you do now. pic.twitter.com/ET81CFQkla