Michigan looks to keep the Paul Bunyan Trophy for a third straight year and retain state bragging rights as it hosts archrival Michigan State in a Big Ten clash in Ann Arbor on Saturday. 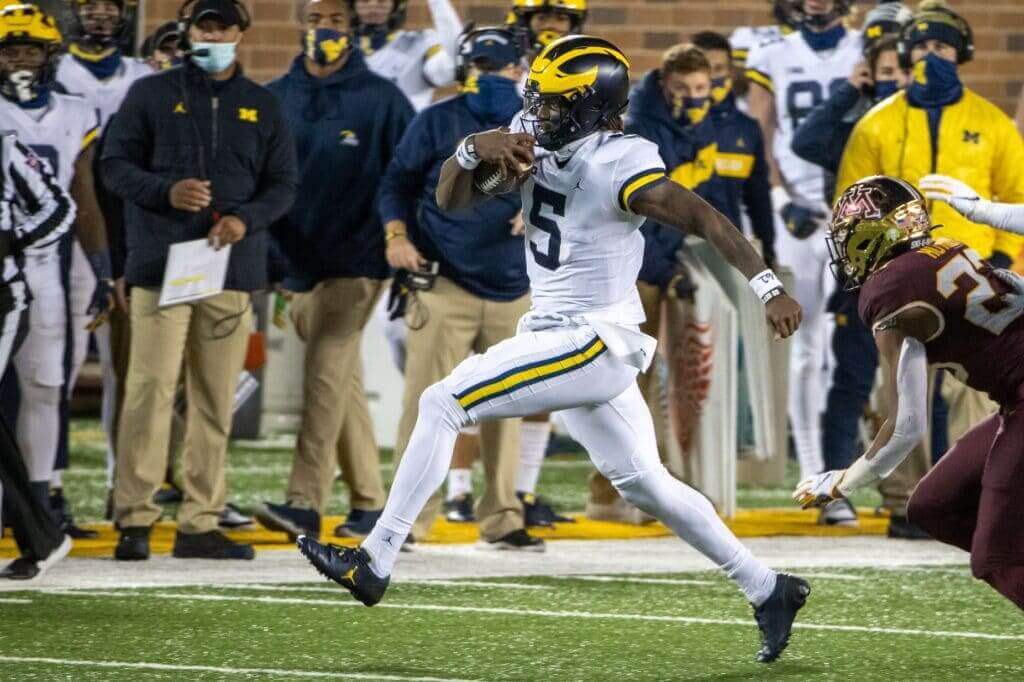 Michigan bragging rights and the Paul Bunyan Trophy are on the line Saturday when 13th-ranked Michigan looks to follow up its impressive season-opening victory at the expense of a Michigan State team trying to shake off a rough debut.

The Wolverines kicked off their belated lid-lifter with a 49-24 victory at then-No. 21 Minnesota last Saturday. Joe Milton threw for 225 yards and a touchdown in his Michigan debut, adding 52 rushing yards and a score while directing a balanced offense that churned out 481 total yards. The Wolverines are trying to retain the Paul Bunyan Trophy for the third straight season, having not defeated the Spartans three straight times since a six-game run from 2002-07.

It was expected to be a rebuilding season for Michigan State, but that process may be longer than originally planned. The Spartans — who were double-digit favorites at home — were plagued by seven turnovers in a surprising 38-27 loss at home to Big Ten doormat Rutgers last weekend. While Michigan State’s defense limited Rutgers to 276 total yards, the offense sputtered as quarterback Rocky Lombardi threw two interceptions and lost a fumble and Jayden Reed offset an impressive effort of 11 catches for 128 yards and two touchdowns by putting the ball on the ground twice.

Wolverines heavy favorites across the board

Unsurprisingly, Michigan has been established as a heavy favorite throughout available sportsbooks in the Wolverine State. FanDuel, DraftKings, William Hill, and FOX Bet all list the Wolverines as 24.5-point favorites at the standard -110. FOX Bet has the “best” moneyline offering for Michigan at -3300, followed by FanDuel and William Hill at -3500. DraftKings is incredibly bullish on Jim Harbaugh’s team with a -5000 offering.

For those who think the Paul Bunyan Trophy will come back to East Lansing with the Spartans, William Hill and FOX Bet are offering Michigan State at +1400 on the moneyline, while FanDuel and DraftKings check in at +1300.

FOX Bet is also offering a narrow band of alternative spreads, with Michigan State getting even money and Michigan -118 at 24 points. The terms are reversed at 25 points, with the Wolverines the even-money offering in that instance. It’s doing likewise for the over/under, offering 51 points at -118/+100 and 52 at +100/-118.

For those who may feel the full-game spread with the high-end hook is not the best play, there are first-half lines available. FanDuel and DraftKings are offering the Wolverines at -13.5 points in the first half, with FanDuel the slightly better value at -120 compared to DraftKings (-125). Michigan State is an even-money underdog at FanDuel and a -104 listing at DraftKings. William Hill is offering Michigan -14 at the standard -110.

FOX Bet is not offering a first-half over/under, but there are differing numbers at the other three sportsbooks. DraftKings has a listing of 26.5 points with a -129/-103 offering, and FanDuel sits at 27.5 points at -115/-105. William Hill is offering an over/under of 28 at -110 in either direction.