Sportsbooks Like Michigan State, But Michigan Comes In As Underdog 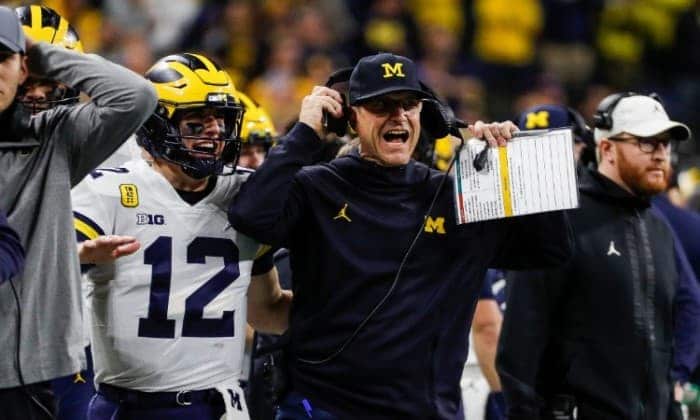 For a minute there, it looked like Michigan State was going to be one of the greatest Cinderella stories of all-time, after boosting its record to 8-0. The Spartans — who weren’t even expected to be a .500 team — certainly had their eyes on the playoffs.

And then … they lost to an unranked Purdue team, and then, two weeks later, got pasted by Ohio State.

As a result, those national championship dreams stayed in the realm of REM sleep, and the now 11th-ranked Michigan State team instead got an invite to the Peach Bowl against the 13th-ranked Pittsburgh Panthers. They play in Atlanta at 7 p.m. Thursday on ESPN.

And while there is plenty of pride to play for here, a lot of the shine of this game has been sullied with Panthers quarterback Kenny Pickett and Spartans running back Kenneth Walker III both opting out of the game, due to plans to enter the 2022 draft. (Pickett is widely expected to be a mid-first round pick, while Walker is not projected in mock drafts as a first rounder but still has a good chance of being the first running back off the board.)

Michigan State's Kenneth Walker III has declared for the NFL Draft and has opted out of the Peach Bowl pic.twitter.com/R1vvrwZ67n

In addition to being without its star running back, Michigan State is also probably going to be without linebacker Quavaris Crouch and tight end Tyler Hunt.

Michigan State is nonetheless a 2.5-point favorite, with that number found nearly everywhere across the board, with Barstool and BetRivers Sportsbook offering the best bang for the buck at -107. It’s a far cry from the opening line, which had Pittsburgh favored by 3.5 points. The 6-point swing certainly demonstrates what America’s sportsbooks think of star quarterbacks vs. star running backs.

The over/under was also impacted by the absences of Pickett and Walker, with the over now at 55.5 on BetMGM Sportsbook Michigan, PointsBet Michigan Sportsbook, and FOX Bet Michigan. If you’re leaning under, you can get under 56 at Caesars and WynnBet. Those numbers are down from the opening line above 62.

Michigan plays for chance at title

Meanwhile, the team that Michigan State defeated back on the day before Halloween is playing in the Orange Bowl for a shot at advancing to the national championship.

Instead of faltering after the loss, Michigan tightened up the ship, winning out the rest of its games including a pair of dominating performances to end the season against Ohio State and then, against Iowa in the Big Ten championship game.

Hence, the Wolverines found themselves in the college football playoff, set to take on the University of Georgia at 7:30 p.m on New Year’s Eve on ESPN. (The other semifinal between Alabama and Cincinnati will kick off at 3:30 p.m. that day.)

One bit of movement has taken place on the over/under in what is expected to be a defensive battle: It opened at 43.5 and now is up to 45 in most spots, and 45.5 at PointsBet and BetMGM.

And not only is no one opting out for the NFL draft for the Wolverines, the team has, en masse, received the COVID-19 booster shot.

So without COVID to worry about, Michigan coach Jim Harbaugh can instead concentrate on how best to attack the Bulldogs and their historically good defense, albeit one that got toasted by Alabama 41-24 in the SEC championship game. Worth noting: Georgia had given up a total of 37 points in the five games prior to the Alabama loss.

This marks the second time the Bulldogs have made the semifinals — their first was in 2017. For Michigan, this marks the first time making the mini-dance. It’s also the first time these two squads have faced each other since 1965. Additionally, Michigan’s last national championship came in 1997, and the one before that was in 1948.

New to sports and casino betting? Why not try a bonus offer like WynnBet promo code Michigan or Golden Nugget Michigan bonus code.