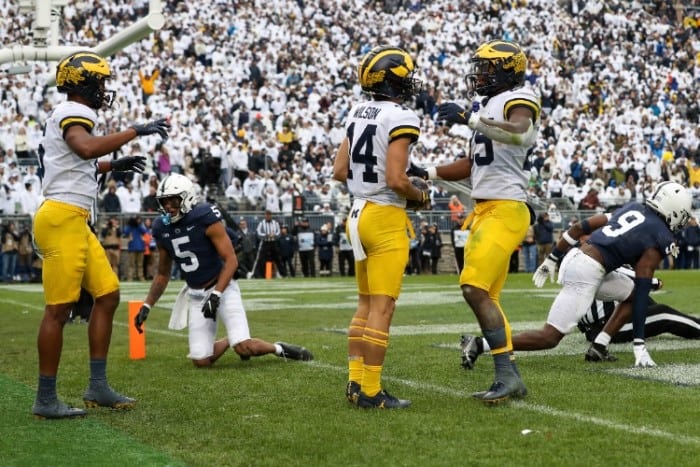 Famed baseball pitcher Satchel Paige once said, “Don’t look back, something might be gaining on you.”

For the University of Michigan football team, a better quote for this week might be something like this: “Don’t look ahead to next week’s battle with Ohio State.”

Not as poetic, certainly, but that’s exactly the situation the 9-1 Wolverines find themselves in as they head to College Park, Md. They face the 5-5 Terrapins Saturday while a home tilt against the Buckeyes looms for the final week of the regular season.

And we’ll chat in a moment about that matchup — and what it might mean for the postseason — but first things first: The eighth-ranked Wolverines have to take care of business in Maryland. They come into the matchup favored by 14.5 points, which can be had for +100 at FOX Bet, and -110 virtually everywhere else.

Jim Harbaugh still seems to be feeling the glow from the win over Penn State this weekend. Here's everything he said about #Michigan with Maryland up next. https://t.co/SYWPUAgLcl

On the moneyline, you’ll have to lay, at minimum, -600 odds (which is where WynnBet is sitting right now, with the highest odds being at BetRivers and Barstool at a whopping -835).

The over/under consensus is sitting at 56.5, with BetMGM, Caesars, and DraftKings offering -110 on the over and TwinSpires at -103 on the under.

Clearly, the sportsbooks are bullish on the Wolverines to dispatch the Terps.

There is, however, not exactly a sportsbook consensus here. FanDuel has Michigan seventh at +5000 to win the national championship, the same as Oklahoma State and a tick behind +4000 Oklahoma.

Also on FanDuel: Michigan is +250 to make the College Football Playoff and +500 to win the Big Ten championship.

And so, yes: Ohio State. The Buckeyes face off against Wolverine-killing Michigan State this week, and that game clearly has major implications for U of M. In short: Michigan boosters should be rooting for Ohio State.

Why? Because if Michigan State wins, and then beats Penn State in the final week of the regular season, the Spartans are going to the Big Ten championship game. But if Ohio State (-18.5) knocks off Michigan State this week — combined with a Michigan victory over Maryland Saturday — the winner of the Michigan vs. Ohio State matchup on Nov. 27 (in Ann Arbor) goes to the Big Ten championship game and has a clear CFP path with a victory.

So in short: Go blue. And, incredibly, go Ohio State.

Oh, and by the way: WynnBet already posted a line for the post-Thanksgiving Ohio State game: Ohio State -4.5.