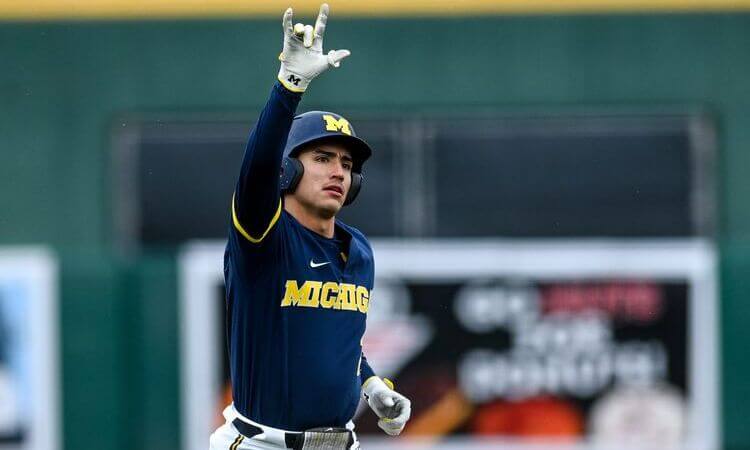 Entering the Big Ten Baseball Tournament, the Michigan Wolverines needed a special few days to keep their season alive. The 2019 national runner-up delivered, winning the conference tournament to earn an automatic berth in the NCAA Tournament.

Michigan baseball out of nowhere beats the No. 1, No. 2, No. 3, and No. 4 seeds in four days to win the Big Ten Tournament title and get back to the dance.

The Wolverines enter the tournament hot after their conference tournament title, which bodes well for the program’s chances of pulling a few upsets.

Oddsmakers don’t love the Wolverines’ chances to make a Super Regional, but the team’s run through the Big Ten Tournament should generate some confidence inside the program. Michigan won four of its five conference tournament games, scoring 10 or more runs in three of the five contests. Clark Elliott’s breakout junior season continued, as the outfielder was named the Big Ten Tournament’s Most Outstanding Player after driving in eight runs. He leads Michigan this season with 14 home runs and 66 RBIs.

The entire regional is filled with talented lineups, as Michigan ranks in the top 50 nationally in runs per game (8.1), doubles per game (2.29), and home runs per game (1.41). Oregon led the Pac-12 with a .306 batting average, and the Ducks were second in their conference in fewest strikeouts. They tend to put the ball in play, a valuable asset in postseason action.

Southeast Missouri State isn’t a slouch either, scoring 7.3 runs per contest. Louisville’s offense is among the country’s best, as the Cardinals average 8.7 runs per game, the 12th-best mark in the nation. The Cardinals put up those stats in a loaded ACC, leading the high-powered conference in triples (21) and stolen bases (92) and ranking second in doubles (119).

“I just don’t know if they’re the right teams to go out and beat Louisville,” Cahill said.

Cahill does, however, acknowledge Michigan’s experience in this situation. When the Wolverines made the College World Series final in 2019, they entered the event with minimal outside expectations.

“I’m not going to say they’re going to finish as national runners-up this year, but they certainly have an understanding of what that kind of run looks like,” Cahill said.

Michigan is +20000 on DraftKings and BetMGM to win the national championship.

Another program from the state, Central Michigan, qualified for the NCAA Tournament and offers some interesting value as a longshot. The Chippewas won the MAC to punch their ticket to the Gainesville Regional, hosted by the University of Florida. Central Michigan advancing to an NCAA Super Regional isn’t out of the question, but a regional with Florida, Oklahoma, and Liberty offers a tough path forward.

“Central Michigan has strong tournament experience, they were in a regional final last year, and they have a strong pitching staff that I think gives them a shot,” Cahill said.

Andrew Taylor for C. Michigan is a stud.

An opening win over Florida would go a long way if Central Michigan wants to advance to a Super Regional, especially given college baseball’s challenging regional format. The double-elimination style event gives an advantage to teams able to open regional play with a pair of wins.

Where to bet college baseball

Barstool Sportsbook also offers futures odds, and it wouldn’t be a surprise to see the operator offer game lines at some point during the postseason. Like with most sports, it’s worth checking multiple legal sportsbook operators to find the best odds for your bets.

With a sport like college baseball, you may also have to wait until close to first pitch for some sites to provide betting lines. College football and basketball regularly include advance lines, but those can be harder to find with other collegiate sports.