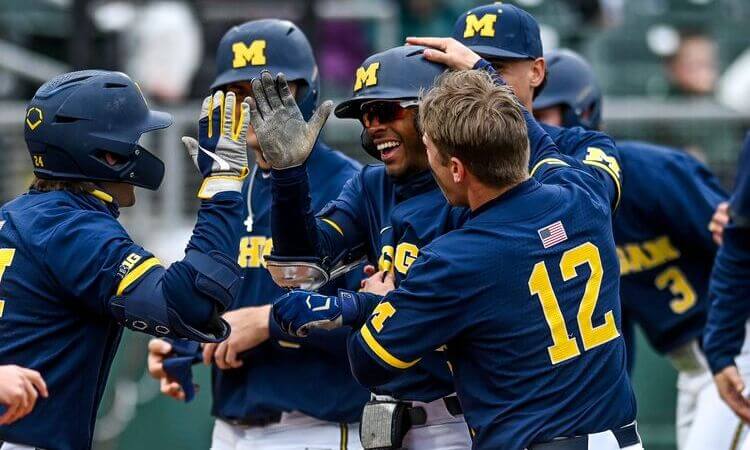 If the University of Michigan baseball team wants to make the NCAA Tournament, the Wolverines will need to be superb down the stretch. Their 25-21 record leaves plenty to be desired, as does the team’s RPI of 95.

Fortunately for Michigan, its final two Big Ten series of the regular season come against quality opponents in Maryland and Rutgers. If the Wolverines can pick up at least four wins over those six games, they could propel themselves onto the NCAA Tournament bubble entering the Big Ten Tournament. Baseball America currently projects three Big Ten teams – Maryland, Rutgers, and Iowa – to make the NCAA field.

This weekend, Michigan faces Maryland in College Park, matching the Wolverines against arguably the conference’s best team this year. Maryland is the only Big Ten team in D1Baseball.com’s top 25, checking in at No. 18. Road wins over the Terrapins would certainly bolster Michigan’s shaky resume.

Betting on the blue?

While, as of early Thursday morning, the moneyline and spread for Friday’s series opener against Maryland had yet to be released on DraftKings — one of the few national sports betting operators to consistently offer college baseball bets — Michigan will likely be the underdog.

Despite Maryland likely being favored throughout the weekend, there’s reason to bet on the Wolverines. Michigan, while currently outside the NCAA Tournament picture, plays respectably away from home.

Earlier this season, Michigan actually beat Maryland 7-4 in a neutral site game. Michigan erased a 4-0 deficit by scoring the final seven runs of that game, taking the lead for good on a three-run home run from pinch hitter Joey Velazquez.

The Wolverines also have a noteworthy road win against Louisville, one of the better teams in the country. Furthermore, Michigan has a pair of one-run losses away from home to Texas Tech and Vanderbilt, both ranked teams. But winning at Maryland won’t be easy, as the Terrapins are an impressive 20-2 at home this year.

When it comes to the Big Ten, oddsmakers don’t expect anyone in the league to win the College World Series. SEC powerhouse Tennessee is the national title favorite, sitting at +350 at FanDuel Online Sportsbook.

Maryland has the best odds of any Big Ten team to win the championship, with FanDuel listing the Terrapins at +10000. Barstool Sportsbook lists Maryland at +9000 to win the title, while Michigan sits at +20000 at FanDuel, which makes some sense given the possibility the team doesn’t even qualify for a regional.

It’s possible FanDuel rarely updates its college baseball future odds, as Ohio State is also +20000 to win the College World Series despite a 17-28 record. Barstool Sportsbook lists Ohio State at +10000 and doesn’t include futures odds for Michigan, which is a bit of a head scratcher. Michigan won its series against the Buckeyes earlier this spring and has eight more wins than OSU.

There’s value in taking Michigan to win a game or two this weekend, but it’s hard to like any Big Ten team other than Maryland to make a College World Series run. The Terrapins lead the league in home runs (93) and they’re third in ERA (4.58), thanks in large part to a pair of elite starters. Friday night ace Ryan Ramsey sports a 2.47 ERA, and he recently tossed a perfect game. Saturday starter Jason Savacool also boasts an ERA below 3.00, and he’s a steady second option.

Power hitting and strong starting pitching make for a tremendous postseason combination, and it makes Maryland a legitimate threat to at least advance out of a regional. For Michigan to keep its slim at-large chances alive this weekend, it’ll need to take down a team with aspirations of making it to Omaha. That’s no easy task.