As many people in the country stay at home and are deprived of their income, Mega Millions on Thursday issued a warning to the public about “new scams” that have recently surfaced. The warning from the multi-jurisdictional lottery game comes ahead of an estimated $96 million drawing Friday night.

The advisory from Mega Millions is especially important now as many Americans are feeling added financial pressure in the coming days, weeks, and even months.

According to Mega Millions, the new scams are fraudulently using the Mega Millions name and logo and are promising “big prizes” to people. The scams are coming in the way of official-looking emails or texts.

“One such effort calls itself the Mega Millions ‘International Official Lottery,’ linking to the ‘Official Anniversary Lottery Site’ with a 25th Anniversary logo,” Mega Millions announced. “From samples we have seen, it claims to offer a cash prize of $24,780 but you have to pay a fee to collect” the purported prize.

There is no Mega Millions “international” offering. It’s a U.S.-only game, and not all states participate in it. Michigan is one of them, where players can participate online.

Mega Millions reminded customers that you can’t win any prize in the game unless you buy a ticket, and there is never a fee for collecting real winnings. Some state lottery claims centers have closed in recent days, but you can typically mail in a winning ticket. You also have up to a year to claim in some states.

Vernon Kirk, director of the Delaware Lottery, told MiBets Friday afternoon that advisories of this nature are common in the lottery industry, but he said the Mega Millions advisory on Thursday could be tied, to some extent, to the ongoing national crisis.

“We try to keep people as educated as we can,” Kirk said. “It is true that when situations are a little crazier, like they are with the virus, people become more vulnerable. We get [advisories]  out on a regular basis. Maybe this one is related to [the ongoing national crisis], but it’s just one in a long list of many.”

Mega Millions provided an image of the aforementioned scam: 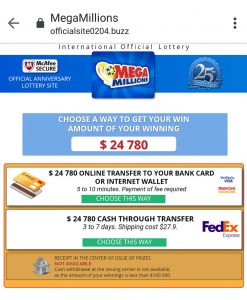