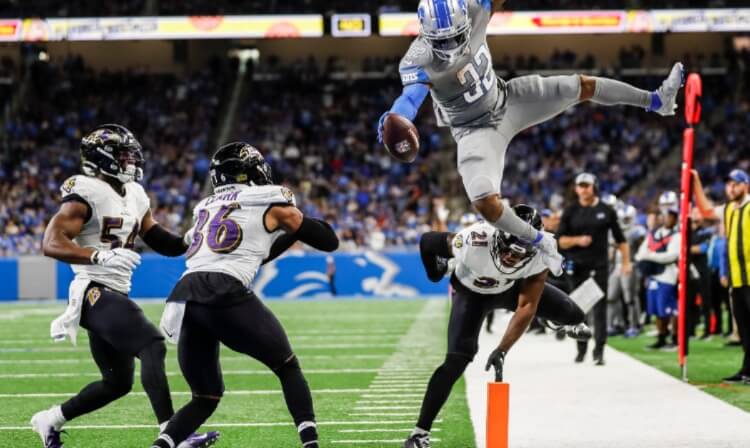 It looked like the Detroit Lions were playing with a hangover last week against the Chicago Bears. Specifically, a Justin Tucker record-setting field goal after a blown delay-of-game non-call after a 4th-and-19 first-down hangover.

Justin Tucker had Lions fans going THROUGH IT pic.twitter.com/KhsIkE52jn

Yeah, that Week 3 loss at home to the Baltimore Ravens certainly seemed to take the gas out of the kneecap-biting Lions last week, as they came out flat and never perked up against the Bears.

To be fair, the Lions offense did move the ball early, getting inside the Bears’ 10-yard-line on the first three drives of the game. But two fumbles and one turning the ball over on downs later, the Lions had zero points to show for it as they were well on their way to an 0-4 start.

Furthermore, after promising to get the electric D’Andre Swift more touches, head coach Dan Campbell saw Swift get a grand total of … 12 touches, tied for his lowest output of the season.

Things won’t get any easier this week as the Lions — who are +1400 on DraftKings to finish the season winless and -200 to be the last winless team (even the sad sack Jacksonville Jaguars are +150) — travel to Minnesota to take on the Vikings.

On the moneyline, the Lions can be had for as much as +360 on BetMGM Sportsbook Michigan.

Perhaps somewhat surprisingly — especially after the Vikings dudded out last week against the Cleveland Browns — the over/under is set at 49.5, with TwinSpires and BetRivers Sportsbook giving -106 on the over and DraftKings and WynnBet Michigan Sportsbook going -110 on the under.

With the 49.5 total and 9.5 spread, oddsmakers see this as a 29.5-20 game. In other words, the Lions are expected to deposit the ball close to three times in the Vikings end zone.

On the player prop side, is this the week that the Lions (finally) let Swift loose? He is clearly the team’s most explosive player. Everyone knows it, and still, he’s getting limited touches instead of being used like Alvin Kamara.

But if you think this is the week, Swift’s rushing + receiving prop is set at 79.5, with the over at -115 on both Caesars and DraftKings.

The Lions secondary has been woeful to start the year, and with Dalvin Cook still not 100% healthy, the over on Kirk Cousins’ touchdown passes (2.5 at +155 on Caesars) looks pretty juicy.

Lastly, if you think this game plays out like every Lions game so far this year — namely, they fall behind big early — then Jared Goff’s 36.5 pass attempt number is probably too low. The juice is -115 across the board.

New to sports betting? Why not try a bonus code like FanDuel Michigan promo code.