Hoping To Turn Season Around, Lions Head To Dallas As 7-Point Underdogs 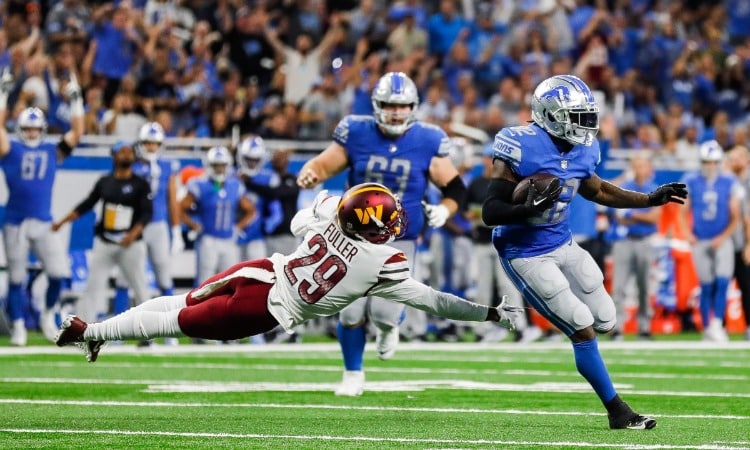 Things could be a little different for the Lions right now.

If they had wrapped up Miles Sanders on third down in the first game of the season late in the fourth quarter … if they hadn’t taken the foot off the gas against the Vikings … if that historically wild game against the Seahawks had seen a different bounce … if Amon-Ra St. Brown and D’Andre Swift hadn’t missed time.

Unfortunately for the Lions, “if” doesn’t matter — the team is 1-4 and coming off a bye and a dispiriting 29-0 drubbing in Foxboro by the Bailey Zappe-led Patriots.

I'm not saying fire anybody. And obviously, they inherited a mess. But it's been 2 years. While other teams improve, the Detroit Lions aren't good enough, and that's on Brad Holmes. My column. https://t.co/Dj3LQclwxG via @freep @freepsports

And things don’t get easier this week, as the Lions head to Dallas to take on the Cowboys and their sixth-ranked (by DVOA) defense.

The sportsbooks agree, with the Lions +265 underdogs at FanDuel and DraftKings and getting a full touchdown on the point spread at -107 at PointsBet and -110 everywhere else.

On the field, the Lions’ best bet for offensive success might come via the run, as the Cowboys’ DVOA against the ground game is a middling 17th. With the expected return of D’Andre Swift — who before he got injured was somehow averaging 8.6 yards a carry on his 27 totes — paired up with Jamaal Williams, the Lions will hope to get the run game grooving early and often.

Prop bets for the duo have yet to be posted while the books wait to make sure Swift suits up. If he does, bets on his overs could be attractive with the team 1-4 and facing must-win territory, to save the season and possibly the future of coach Dan Campbell.

Despite the Cowboys’ success in defending the pass this year, it’s worth a look at St. Brown’s yardage prop — 67.5 at PrizePicks, and expected to be in that neighborhood once the traditional sportsbooks get around to posting it. That number would be his second-lowest yardage total in a healthy game since he became Detroit’s answer to Cooper Kupp last year in mid-season.

On the other side of the ball, the Cowboys will be going up against the Lions’ 31st-ranked run defense, and if you think Dallas is going to control the ball, Zeke Elliot’s rushing attempt prop — 15.5 — is interesting. The over is -104 at BetRivers. Of course, if you think the Lions will come out to a hot start, Elliot will probably cede more work to Tony Pollard, and the best bang for the buck on the under is -115 at DraftKings.