The Lions showed some second-half spark in last week's loss, and hope to show more Monday 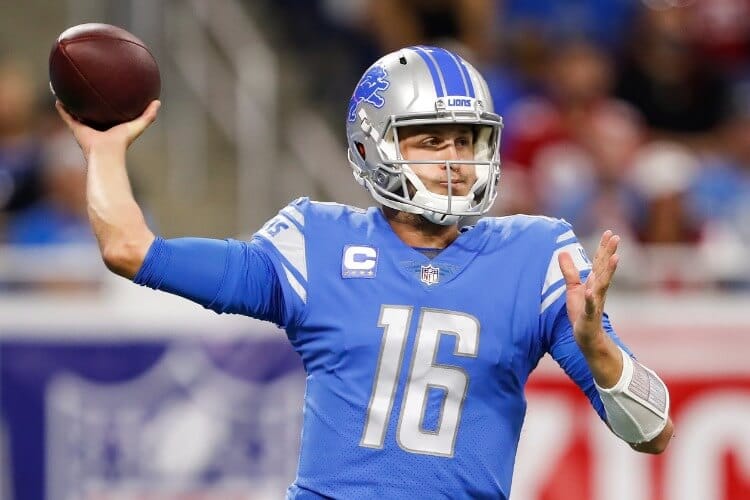 Who put a quarter in the Detroit Lions? They looked beyond terrible, down 38-10 in the beginning moments of the fourth quarter. And then the Lions somehow put up 23 points and nearly capped a furious comeback before sputtering out on the 49ers’ 24-yard line to end the game, losing 41-33.

It was quite a scene, and the team was led by new quarterback Jared Goff, who threw the ball 57 times, the most for a Lions quarterback since Matt Stafford and Dan Orlovsky combined for 70(!) pass attempts in a 42-17 loss to the Arizona Cardinals in 2015.

So the big bright side here for the Lions? They may have lost, but at least their offense proved able to move the ball when they absolutely needed to.

Of course, it wasn’t exactly all sunshine and roses, as again: They fell behind 38-10 before Goff started peppering T.J. Hockenson, D’Andre Swift, and the loquacious Jamaal Williams with 24 combined receptions.

What can we say? @jswaggdaddy just has a way with words… pic.twitter.com/xw0k2jkSAm

And that, above, should be a smidge troubling. Detroit’s squad of no-name wideouts was not great. It didn’t help that Tyrell Williams got himself concussed, but really, when Kalif Raymond is pacing the crew with three grabs for 50 yards, that’s not exactly a positive sign.

Of course, the defense didn’t exactly show off either, so overall, you know, not great.

But the past is the past, and onward and upward, and lo and behold, the Lions will be playing in front of a national audience on Monday Night Football by heading to the frozen tundra (currently not frozen) to take on the Green Bay Packers. Last week, the Packers seemingly forgot they had a football game, losing to the New Orleans Saints 38-3 and gaining only 229 total yards on offense.

For some perspective on what “229 yards” is, consider that the New York Jets finished last in 2020 in yards per game. They averaged 279. So, yeah, the Packers didn’t exactly show up to play last week.

Which raises the question: Are the Packers washed, or was this one-game sample a mere blip on the radar?

“Rodgers’ first 2021 performance was the worst of his career,” read the subheadline in a FiveThirtyEight.com explainer of Aaron Rodgers’ historical dud.

And Rodgers was awful, which has plenty of NFL fans wondering if his off-season power struggle with the team has somehow made him terrible.

Of course, a home tilt on national television against the Lions sure seems like the cure to whatever ails Rodgers, but due to the Packers looking like the Lions and the Lions looking frisky in the second half of last week’s game, is it possible there might be an upset brewing?

The sportsbooks don’t necessarily think so, as you could get the Lions and 12 points at DraftKings as of this writing. On the moneyline, the Lions can be had for a mouth-watering +460 on FanDuel. Based on the performances of both teams last week, it won’t surprise if the Lions see a ton of money come in on them as the game gets closer to kickoff.

And while actually defeating the Packers in Lambeau is a tall order, the 12 points sure do seem like a lot right now.

On the player prop side, if you think the Lions will be playing from behind again, the Jared Goff props are tantalizing. At BetMGM and Caesars, Goff’s pass attempt number is set at 35.5, and the over can be had at +100. His passing yard prop is set at over 258.5 on DraftKings at -115.